Home » A Marriage That Started With a Search for Justice

A Marriage That Started With a Search for Justice

Jerome Dixon spent 21 years in prison for a murder he maintains he did not commit. Raha Lewis is a red carpet writer whose mother is a designer to the stars. A scholarly talk on racism brought them together, and a Hot Wheels racetrack for her son sealed their union.

On July 25, 1990, Mr. Dixon, then 17, was taken into custody by Oakland, Calif., police on suspicion of murder. He was interrogated by police investigators for 25 hours with neither a parent nor a lawyer present. He doesn’t recall if he waived his Miranda rights that night, and even if he did waive them, he has said he is sure his teenage self did not understand what those constitutional rights meant or what it meant to give them up.

He was exhausted and felt the only way out of the room was to tell the investigators what they wanted to hear. It wasn’t until he signed a confession, that he was allowed to make his first phone call. He called his mother.

Not knowing that they were going to retry him as an adult after serving seven years as a juvenile at the California Youth Authority, now known as the California Division of Juvenile Justice, he accepted a plea deal (for first degree murder and three counts of robbery and assault with a deadly weapon). After seven years, he was subjected to a second trial and transferred to the adult system.

Throughout his years in prison, he maintained his innocence, and, finally, on Oct. 17, 2011, at 11:45 a.m., Mr. Dixon was released from the California Men’s Colony facility in San Luis Obispo, Calif., through California’s parole system. 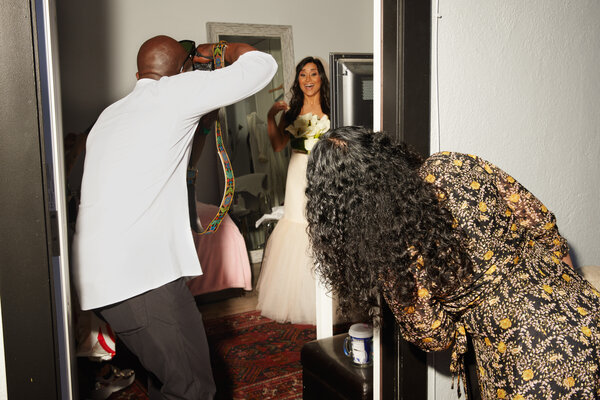 “Had I known my rights, I would not have served 21 years for a crime I did not commit,” Mr. Dixon said.

Despite everything, he is surprisingly positive. “I don’t harbor any animosity toward the legal system or the police,” said Mr. Dixon, 48. “It was a small group of people who were responsible for what happened to me. I still believe in protecting and serving.”

On July 21, 2019, Mr. Dixon attended a talk being presented by Ruha Benjamin, a professor in the Department of African-American Studies at Princeton, titled “Everyday Racism and Social Change.” The event was at the Santa Monica Baha’i Center. That night he met Ms. Lewis.

During the event, Ms. Lewis asked a question, “Why is it that some of my girlfriends have met lovely Black men but their parents won’t let them marry them?” You could have heard a pin drop, Ms. Lewis said.

After the session, Mr. Dixon approached her saying he was interested in hearing more about her comment and asked her out to coffee the following week. “It wasn’t a date, except it was,” Ms. Lewis said. “We started talking and never stopped. I was all in from the start. Our conversations were extremely deep, and I was so taken by his story.”

Ms. Lewis, 43, has a degree in political science and performing arts, as well as a bachelor of laws from the University of Sydney Australia. She is a freelance writer for People Magazine and a founder and chief executive of Tailor Here, an agency for tailors for celebrities and photo shoots in New York, Los Angeles and Washington.

Mr. Dixon is a project manager at Raw Development, a construction company based in Los Angeles. He graduated from Stockton Unified School District while in prison. Originally from Alameda County, Mr. Dixon now lives in Los Angeles. He continues to fight for his exoneration.

“His hope is to once again become whole,” Ms. Lewis said. He also serves on the board of the Anti-Recidivism Coalition, a nonprofit group focused on ending mass incarceration in California.

After their official first date on Aug. 2, 2019, Mr. Dixon told Ms. Lewis that he wanted to meet her son, Cy, who was 7 at the time. Mr. Dixon told her if Cy didn’t approve, there wouldn’t be a second date. “I had never had a man tell me that my son was his first priority,” Ms. Lewis said.

Three days later, he went to Ms. Lewis’s home and built a Hot Wheels track to surprise Cy. A few days later, the two met. “After that, I asked Cy, ‘Do you like this guy? Do you need more info? Because we don’t have to keep him,’” Ms. Lewis said. Cy approved from the start. “Then I knew we would be able to be a family,” Mr. Dixon said.

Mr. Dixon proposed to Ms. Lewis at their home Jan. 28, 2021, planning it with Cy. Rose petals were strewn across the room, and Mr. Dixon stood beside a heart-shaped cake holding an open ring box. “He even incorporated my son into his proposal,” Ms. Lewis said, “saying that it’s because of Cy that he is able to ask this question: Will you marry me?”

The couple were married April 3 at their home in Los Angeles with 10 people attending in person and another 126 on Zoom from all over the world, including England, Israel, Japan, Malawi, Costa Rica, Mexico and Australia. Ms. Lewis’s brother, Ryan Hatami, hosted the Zoom celebration from Sydney.

[Sign up for Love Letter and always get the latest in Modern Love, weddings, and relationships in the news by email.]

“They have such a heartfelt and genuine relationship,” Mr. Hatami said. “Marriage is about the union of families rather than the union of individuals. He actually asked my permission before he proposed. Just so many amazing qualities in this guy.”

The couple decided to have a Baha’i wedding, which requires only three things: two approved witnesses, the consent of all living parents, and a single verse that both bride and groom recite. “We will all verily abide by the will of God.” There is no officiant required. The two witnesses signed the documents, which were then returned to the Los Angeles Baha’i Center and then sent to the city clerk. “The idea being to create a union between the two families,” Ms. Lewis said.

Pachelbel’s “Canon” played as Ms. Lewis walked down the aisle created by the chairs set up for the in-person guests. Ms. Lewis wore a short, white Miu Miu dress, which had a subtle blush tint and to which her mother, Nanaz Hatami, a founder and principal designer at Tailor Here, added a skirt. Her mother also made Ms. Lewis’s veil. (Ms. Hatami’s celebrity client list has included Kim Kardashian, Janelle Monáe, Susan Kelechi Watson, Lindsey Vonn, Common and Catherine O’Hara.)

Cy began the ceremony with a prayer in Persian, which Ms. Hatami had taught him. The singer-songwriters Yosi and Meredith LaMarche performed over Zoom.

Because of the pandemic, Ms. Lewis’s father, who lives in Atlanta, and Mr. Dixon’s mother, who lives in Northern California, attended online rather than in person. “This was the hardest part of the whole thing. Having a Zoom wedding had a lot of benefits, and it reminded you of what’s really important. But there was still a part of me that woke up the day of and thought, ‘I wish some more of my peeps could be here,’” Ms. Lewis said.

During the ceremony, Ms. Lewis dedicated their marriage to justice.

“This means a lot to us,” she said. “First of all because we are working hard to reopen Jerome’s case and seek justice for what happened to him. We also want justice to be the bedrock of our own lives. We want to live it, breathe it and own it, meaning the little things we do at home, the way we move in the world, we want all of that to be fueled by that sentiment.”

While still on the approximately hourlong Zoom call, the couple cut the cake and had their first dance and kiss before signing off.

“I want my life to be an example to others,” Mr. Dixon said. “Even when a narrative is thrust on you, you still have the choice of whether or not you will live up to that narrative or change it. I chose to change it.”

Where The couple’s home in Los Angeles

Something to Say Ms. Lewis said that her son asked her why she didn’t let him say something nice about Mr. Dixon during the ceremony. “I was so sad because I had asked him if he wanted to give a speech and like a true kid he said, ‘No.’” She reminded him of that and Cy replied by saying, “I didn’t want to give a speech. I just wanted to say something nice about Jerome.” When she asked what he would have said, Cy replied, “I love Jerome because he taught me how to clean my room thoroughly.”

Star Power Kim Kardashian, who Ms. Lewis met through Tailor Here, delivered well wishes during the ceremony via video. “We service all her brands,” Ms. Lewis said. “But it’s so much more than that. Kim’s devotion to justice reform is truly a gift at a time when there is a desperate need for change. She said she will help Jerome any way she can. There are very few people like that in Hollywood and she is one of them. The fact that she’s helping people like Jerome and so many others with stories like his, brings me to tears when I think about it too much.”