In Los Angeles, where even houses get their proverbial close-ups as TV or movie locations, a property’s appeal can crest on its IMDB credits alone.

But only the Sowden House in the Los Feliz neighborhood can claim film cameos, a pedigreed architect and a history as the possible sight of a grisly unsolved murder. Never mind the fact that the exterior entryway resembles a menacing maw, earning it the apt nickname “the Jaws house.”

Designed by 1926 by Lloyd Wright (the son of Frank Lloyd Wright), the Mayan Revival-style mansion most recently appeared in the TNT limited TV series “I Am the Night,” a fictionalized account of the Black Dahlia murder of an aspiring Hollywood actress, Elizabeth Short, in 1947.

Some believe that Ms. Short was murdered and mutilated in the basement of the Sowden House when it was owned by George Hodel, a prominent gynecologist who lived there from 1945 to 1950. Mr. Hodel was known for hosting wild parties in its basement.

Seven decades and five owners later, Sowden House is once again a swinging social center. Last year Dan Goldfarb, an entrepreneur and former hedge fund analyst from New York, bought the 5,600-square-foot, four-bedroom home for nearly $4.7 million with the idea to make it a cultural hub for cannabis. (Mr. Goldfarb is the founder of Canna-Pet, a company in Seattle that sells hemp-derived CBD products for cats, dogs and other pets.) 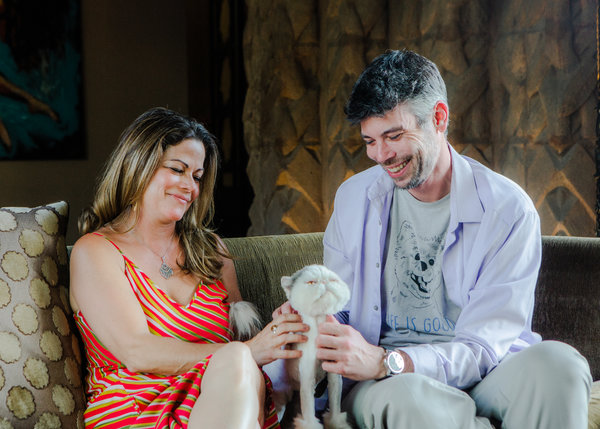 But Mr. Goldfarb, who has been called a “marijuana millionaire,” doesn’t want anyone to get the wrong idea.

“There is this misconception that every event here is about cannabis,” he said on a sunny afternoon inside the sprawling living room. (In all fairness, however, it was hard to miss a sizable bong on the kitchen counter.) “This is not like ‘Cheech & Chong’ or a descent into ‘Reefer Madness.’”

Indeed, Mr. Goldfarb and his wife, Jenny Landers, have held fund-raisers for politicians (including one for Representative Katie Hill, Democrat of California) and nonprofits (Kindred Spirits Care Farm, which teaches students about farming). The house has also been used for a music video (for the XX song “I Dare You”), photo shoot (In Style magazine), art exhibition (by the Gagosian Gallery) and dance performance (for HomeLA, an arts group).

“You really don’t need to add much to the house because it has so much character,” Ms. Landers said.

The couple have no plans to redecorate (the furnishings were included in the sale), and they arrived at their new home in a minivan with just cats — eight of them — and suitcases. An 11-foot sofa fronts an ottoman fit for an ogre. A giant antique Japanese door serves as a coffee table.

“Everything is scaled up, like in “Alice in Wonderland,’” Mr. Goldfarb said. “A normal couch would look rinky-dink in here.”

With its undulating textile block walls, soaring ceilings and pavilion courtyard, the home certainly craves a crowd. Empty, it’s as incongruous as a woman in a ball gown at a bus stop.

The original owners, John Sowden and his wife, Ruth, envisioned it as a bohemian playhouse for aspiring actors and Hollywood bons vivants. The once grassy courtyard served as seating during performances. Now, a wading pool and an ornate fountain shimmer in the sunlight.

“It’s like ‘Brigadoon,’” Mr. Goldfarb said “Even the most jaded L.A. people who have seen everything have a change of mind-set when they walk in here.’”

Jessica Trent, a publicist and event planner who has hosted events at Sowden House, said it makes for a stellar backdrop. “Artists, architects and philanthropists alike are motivated to attend a fund-raiser there, and show off their photos on Instagram,” she said.

The architect was said to have been inspired by a Mayan temple, as interpreted by a movie set. The style of using stepped concrete blocks mimics a few of Lloyd Wright’s father’s homes in Los Angeles, like the Ennis House, which made an appearance in the film “Blade Runner.”

“As I’ve gotten older, I’ve gotten more reclusive,” he said. “I like to work, be in my own head and be around my cats all the time.”