It looks like Hailey Baldwin is trying to keep up with Justin Bieber’s tattoo collection, as she just added some new ink to her neck and hands. Hailey Baldwin’s dainty hand tattoos were done by none other than LA-based celebrity tattoo artist Doctor Woo, and the intricacy of the new work is pretty amazing. Seriously, I’m ready to put this artwork on myself STAT.

On Friday, Aug. 23, both Baldwin and Woo took to Instagram to debut the tiny new ink on the model’s hands, and one new tattoo on her neck. On Baldwin’s digits, you’ll find a small cursive "B" on her pinky knuckle, a nod to both her married and maiden names, and then two small arrowhead lines on her pinky. On her ring finger, there are now tiny dots and a diamond shape that then leads into an image that mirrors a sunrise at the top of her finger. On her middle finger is a rose, a crescent moon, and an array of dots. And finally, on her index finger are diamond-shaped adornments, and a star at the top of her finger. Finally, on the side of Baldwin’s neck is the word "lover" tattooed in cursive.

While Woo shared an image of Baldwin’s new art to his feed, the model also took to her own Instagram Stories to show off the new work and thanked and tagged Woo. "@_dr_woo_ on the new tats," read the caption.

Baldwin’s new tattoos come just before she and her husband Justin Bieber are reportedly set to have a wedding ceremony in front of friends and family in September 2019. You probably remember when the couple went to a New York City courthouse in September 2018 to make their marriage official, and now, one year later, they will reportedly hold a ceremony and celebrate with their loved ones in South Carolina next month, according to TMZ. Clearly, Baldwin will have some new tats to rock as an accessory to her wedding day look.

Both Baldwin and Bieber have an affinity for ink, and while Bieber’s sleeves of tattoos may be more visible than the dainty tats that Baldwin seems to prefer, neither of them are afraid of the ink gun. In fact, rumors have swirled that the couple might even have matching tattoos. Because what’s a marriage license when you can declare your love permanently with matching tattoos? It was rumored in late 2018 that the pair went to New York-based celeb tattoo artist Bang Bang (Keith McCurdy) for the coordinating ink. 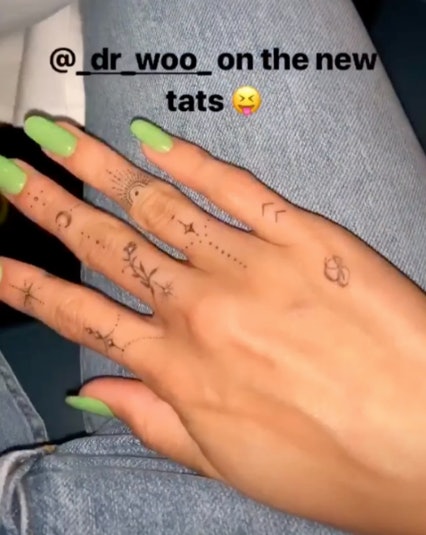 While it is still speculation, fans and followers alike believe that Baldwin has a tattoo that matches the "grace" tattoo Bieber has etched above his right eyebrow. And since Baldwin is known for rocking dainty ink all over her body, if she does have a "grace" tattoo that is as small as Bieber’s, it’s no surprise that it is not readily visible.

In addition to Baldwin’s new intricate hand tattoos, Doctor Woo is also the artist responsible for many a tattoo on celebs like Drake, Cara Delevingne, and Miley Cyrus. If you’re interested in booking an appointment with the tattoo artist for yourself, then you can find Woo at the Hideaway at Suite X in Los Angeles.

So, if you’ve been itching for a new tattoo, but don’t want to commit to a larger piece, take some inspiration from Hailey’s new ink as a way to adorn your skin in a pretty yet subtle way.