The only thing hotter than the sunshine during Larsa Pippen’s day of yachting was her hot pink, snakeskin bikini.

Despite the drama, Larsa Pippen is living her best life. The model and former The Real Housewives of Miami star took some time to enjoy the sun and surf while vacationing aboard a yacht on May 26. Larsa flexed while rocking a hot pink bikini during her vacay, and it may just be one of her sexiest yet.

The bright thong two-piece, which you can see above, also features a subtle snakeskin print, and is held together with thin black strings. Larsa accessorized with a pair of dark black sunglasses and a black DC Skate baseball cap. Larsa kept her hair down and loose, flowing behind her.

Her beachy moment comes amidst her massive drama with ex-boyfriend Malik Beasley‘s wife, Montana Yao. After Malik decided to win back his estranged wife, who filed for divorce once he began dating Larsa, all hell broke loose. It started with Malik issuing a public apology to Montana on Instagram: “I was looking for more when it was right here that whole time.. I’m telling the world and you that there’s no body like you for me,” he wrote. 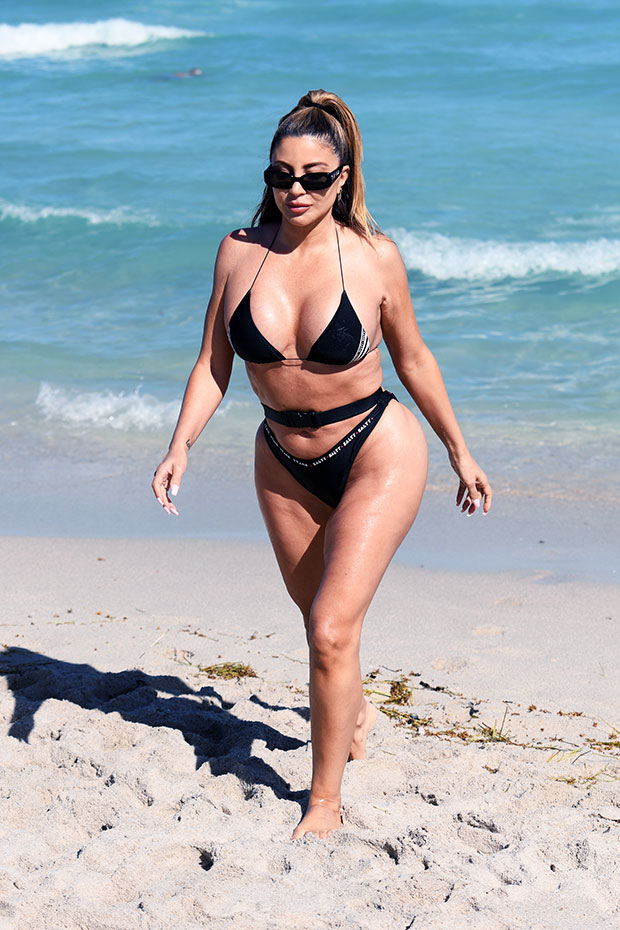 He said that he ended his “relationship,” but ever named Larsa. But his mention of “pictures at the mall” makes it clear who he was talking about — Larsa and Malik’s romance was uncovered when photos of the duo at a mall in Miami were published. Cue Montana and Larsa beginning a war of words. Montana posted on her Instagram Story one day later that she appreciated Malik’s public apology, but didn’t indicate that she was taking him back.

She did, however, issue a warning to Larsa to step off. “First of all we as women won’t claim you, you wouldn’t know girl code if it slapped you in the face you just a old desperate thirsty a– ran thru blow up doll,” she wrote, in part. Larsa clapped back, calling Malik and Montana “clout chasers.” Well, it only escalated from there. Now, Larsa’s yachting and not paying any mind to what happened.