Home » Fashion » No models allowed: The 10 most stylish celebrities of 2022

No models allowed: The 10 most stylish celebrities of 2022 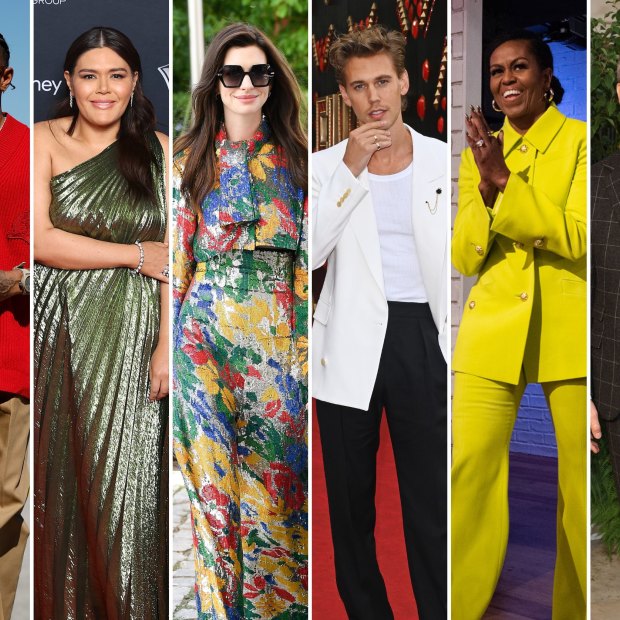 Stars and their stylists emerged from the lockdown confusion of 2021 with a few missteps before finding their red carpet footing in 2022, but 10 people stood out among the fashion roadkill.

While actors and musicians, such as Florence Pugh and Lil Nas X, are well-represented on this list, models have been excused. Despite the street style prowess of Bella Hadid, Kaia Gerber and Kendall Jenner, there’s something more exciting about seeing nonprofessional beauties interpret the latest trends and designer looks.

Here are 10 stars who repeatedly knocked it out of the park in 2022 by expressing themselves through designer labels, eccentric accessories and rare moments of refinement. 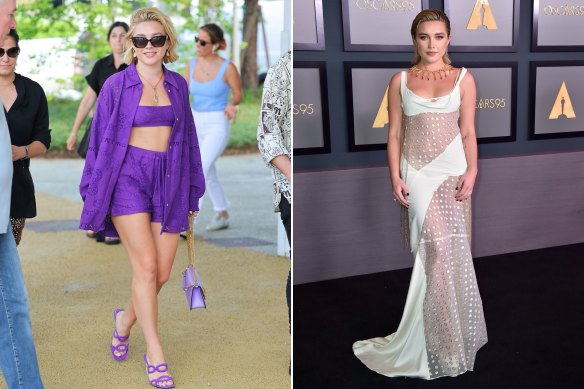 Actor Florence Pugh in Valentino at the Venice Film Festival in September; in Victoria Beckham at the Academy of Motion Picture Arts and Sciences’ 13th annual Governors Awards in LA in November.Credit:Getty

Drama followed British actor Florence Pugh throughout the press tour of Don’t Worry Darling, alongside director Olivia Wilde and co-star Harry Styles. Along the way Pugh picked up the nickname Miss Flo but dirt failed to stick to the stylish 26-year-old, who looked fresh at the Venice Film Festival in a purple Valentino shorts set, later accessorised with an Aperol Spritz.

On more recent red carpet outings for The Wonder, Pugh has skilfully walked the fine line between sultry and tawdry in cropped pantsuits and sheer dresses. The winner was an embellished gown from Victoria Beckham, with slick hair, statement jewellery and a stare that could cut through the next person who gets in her way. 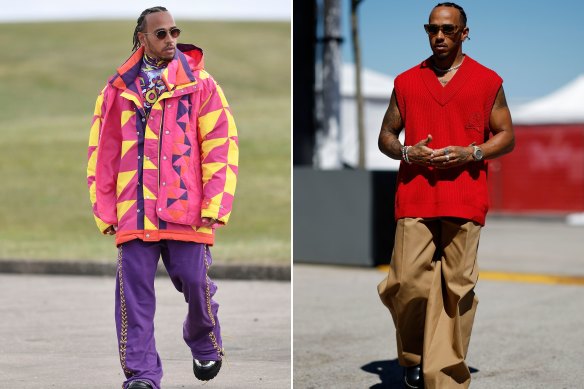 The steaming asphalt of international grand prix circuits is the personal runway of sport’s winner in the style stakes, outpacing Daniel Riccardo and Lando Norris. Lewis Hamilton demonstrates courage in Formula One and with his directional selections from Valentino, Isabel Marant, Alexander McQueen, Jacquemus, Tommy Hilfiger and Blue Marble Paris.

This isn’t just about spruiking sponsorship deals, although Hamilton did appear in Valentino’s Pink PP advertising campaign this year. Hamilton is broadening the concept of men’s style at breakneck speed and supporting emerging designers on the way. At the 2021 Met Gala he brought tickets at his table for emerging black design talent, Theophilio, Kenneth Nicholson, and Jason Rembert.

“The goal is, and always will be, to open doors for young Black creatives,” Hamilton posted to social media. 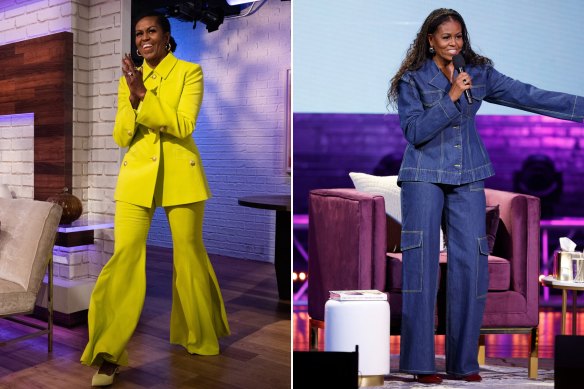 Michelle Obama in Proenza Schouler on the US ‘Today’ show, November 14 and in Ganni denim for ‘The Light We Carry Tour’ at Warner Theatre on November 15, 2022 in Washington, DC.Credit:Getty

The fashion influence of First Ladies usually dims the moment the removalists turn up at The White House, but Michelle Obama is joining Jackie Kennedy as the exception to the rule.

When her husband Barack was President, Michelle carved a refined image of full skirts and sleeveless tops accessorised with toned biceps but her recent book tour for The Light We Carry ushered in an era of change.

Michelle is exerting strength in modern power suits that could never be mistaken for Hillary Clinton’s cast-offs. In double denim from Copenhagen cool girl label Ganni and highlighter yellow Proenza Schouler, Michelle is the cool mum the world needs to see right now. 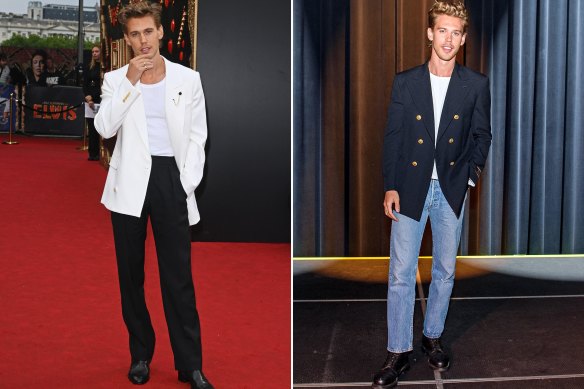 Austin Butler in Alexander McQueen at the ‘Elvis’ premiere on May 31 in London and wearing a Tom Ford blazer with jeans at Graceland in June,Credit:Getty

While director Baz Luhrmann delivered his usual explosion of sequins, colour and visual ecstasy in Elvis, leading man Austin Butler proved himself a style king on the red carpet. Butler’s enviable quiff was the only nod to the legendary Elvis Presley away from the cameras, with Butler swapping Hawaiian shirts and jumpsuits with double-breasted blazers, T-shirts and singlets.

The smart casual result helped bring tailoring into the roaring twenties, with more than a dash of insouciance as Butler ignored the once necessary evil of ties. Bonus points for trading sneakers for leather shoes, although we would have settled for blue suede shoes. 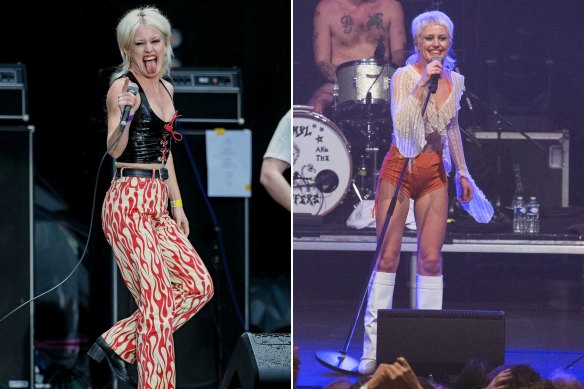 Amy Taylor from Amyl and the Sniffers at GMHBA Stadium (Kardinia Park) on March 4, 2022 in Geelong, and performing at Élysée Montmartre on November 5, 2022 in Paris.Credit:Paul Rovere, Getty

While countless musicians mine the grunge nineties and Y2K for inspiration, Amy Taylor from Amyl and the Sniffers successfully trawls the early eighties for looks that are a little Debbie Harry, with a splash of Chiko Roll model and roller derby Dolly Parton.

Despite having caught the eye of Hedi Slimane from Celine and former Gucci artistic director Alessandro Michele, Taylor remains an original, having escaped the over-styling of her contemporaries.

The trick is that even in a latex look, lace-up cropped corset top worn with flame jeans from Double Rainbouu, Taylor exerts a brand of female empowerment not seen on stage since Chrissie Amphlett rocked a school uniform with The Divinyls. 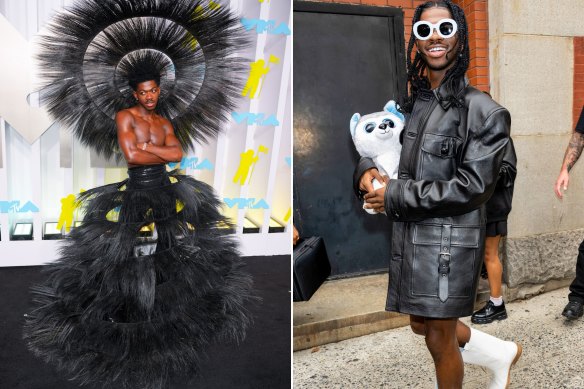 Lil Nas X in Harris Reed at the MTV Music Awards in August and wearing Coach outside the label’s show at New York Fashion Week in September.Credit:Getty

American performer Lil Nas X is following the glittery footsteps of Elton John by exploring looks that are over the top, on and off-stage.

At the Met Gala and MTV Awards, Lil Nas X has become a rival to Lady Gaga and Rihanna for memorable red carpet moments. This year he made the cross-over to the runway for US luxury label Coach and the Vogue World show at New York Fashion Week.

At the MTV Awards Lil Nas X delivered one of the year’s most memorable fashion moments in an outfit by British designer Harris Reed with a headpiece of handpainted black feathers that echoed supermodel’s Iman’s Met Gala look in 2021.

“This is heavy and it is Harris Reed,” Lil Nas X said on the carpet. “It’s something fresh, something new, I feel amazing.” 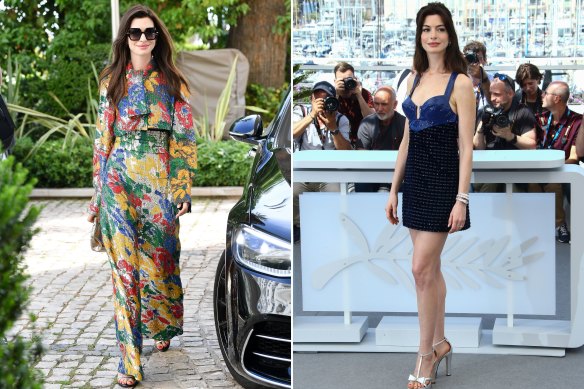 Anne Hathaway in a Schiaparelli sequinned suit and Gucci mini-dress at the Cannes Film Festival in May. Credit:Getty, AP

Somewhere in an alternate universe occupied by fictional movie characters, Meryl Streep’s Miranda Priestly from The Devil Wears Prada is nodding approvingly at the style transformation of Anne Hathaway.

Since The Princess Diaries, the talented Oscar-winner has looked as though she has been playing characters on the red carpet but in 2022, Hathaway is elegantly at ease.

At the Cannes Festival in May, Hathaway wore extravagant sequins from Schiaparelli and a sixties-inspired mini-dress from Gucci with the ease of a T-shirt and jeans.

Perhaps Hathaway was playing the part of a fashion siren but on this occasion it was perfect casting. 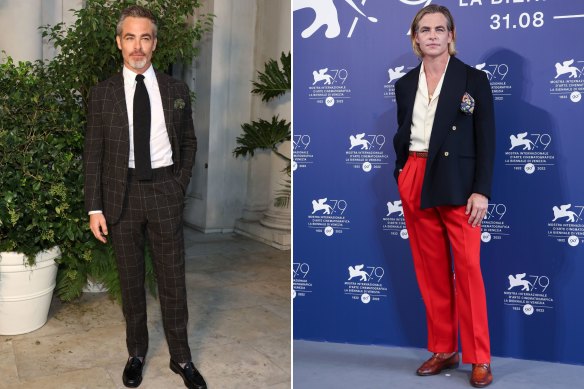 There’s more than a passing resemblance between Don’t Worry Darling actor Chris Pine and Brad Pitt, who the actor just trumped to appear on this list.

Pine scored a spot above the skirt-curious Pitt because of his versatility, treading from relaxed California cool to getting suited and booted New York style.

With his salt and pepper beard, unruly locks Pine flirts with appearing like a dishevelled Nick Nolte but always manages to save the day by balancing quirky touches with American classics. 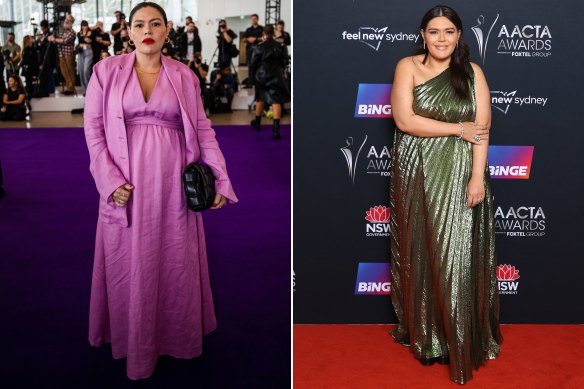 Nakkiah Lui in Bondi Born at Australian Fashion Week in May and weearing Oscar de la Renta at the AACTAs.Credit:Edwina Pickles, Getty

Recently, the Australian red carpet has faced an onslaught of attention-seeking reality stars fresh from dating and heavy-petting shows. Writer and actor Nakkiah Lui is the perfect antidote in stylish designs that eschew paparazzi-bait cut-outs and crops for elegant silhouettes and pops of colour.

At Australian Fashion Week in June, Lui delivered a masterclass in maternity dressing, slightly more refined than Rihanna’s street style, at the Bondi Born show in a pink linen dress and blazer from the local label.

At the AACTAs the new mum and Gamilaroi/Torres Strait Islander woman continued a streamlined approach to style in a single-shouldered Oscar de la Renta dress and Cartier jewels. Now with a two-year deal with US television network HBO, there should be plenty more opportunities for Lui to express herself on the red carpet. 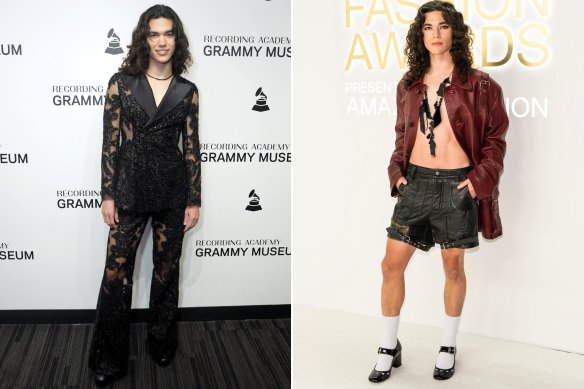 Singer Conan Grat at the Grammy Museum in LA in September wearing a Moschino suit and at the CFDA Awards in Coach.Credit:Getty

When it comes to raiding the women’s section of designer collections, singer Conan Gray leaves Harry Styles in the shade.

The singer frequently referred to as “The Internet’s Favourite Sadboi” takes delight in surprising fans with a gender-neutral approach to dressing that celebrates the sensuality of sheer fabrics and occasional deep dive into feminine frippery.

At times the 24-year-old Californian’s looks seem thrown together from the dress-up box of a Saudi Arabian princess and emo skater, which is why you can’t look away. 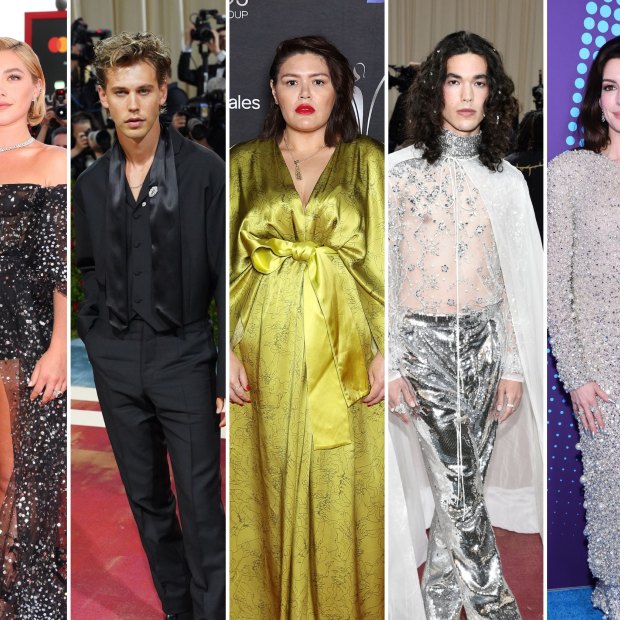