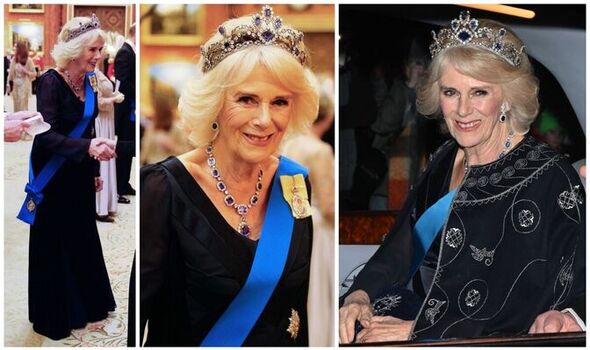 Queen Camilla, 75, wowed in the Belgium Sapphire Tiara and the George VI Sapphire earrings and necklace at tonight’s Buckingham Palace Diplomatic Reception. The sapphires were acquired in stages by the late Queen Elizabeth, making it a touching tribute to Her Late Majesty.

The Queen Consort wore these sapphire jewels just two weeks ago at the state banquet to welcome the South African President, Cyril Ramaphosa.

She donned the Belgian Sapphire Tiara, a converted royal necklace purchased by Elizabeth in the 1960s.

Even more meaningfully, she paired the tiara with pieces from the King George VI Sapphire Suite, which was a wedding gift to Elizabeth from her father.

She donned a royal blue sash as well as the Royal Family Order, made up of a portrait of the Queen on a yellow ribbon.

The sapphires were aquired in stages by Queen Elizabeth; the necklace and earrings were a wedding gift from her beloved father, King George VI, in November 1947. The jewels were antique, dating to the Victorian era.

Later, Queen Elizabeth acquired a diamond and sapphire necklace, formerly the property of a Belgian princess, to add to the set.

The necklace was set on a tiara frame in the early 1960s making the suite into a more complete parure. She also had the necklace altered slightly, and she had a bracelet comissioned to complete the set.