The Cost Of Simone Biles Olympic Leotard Might Surprise You 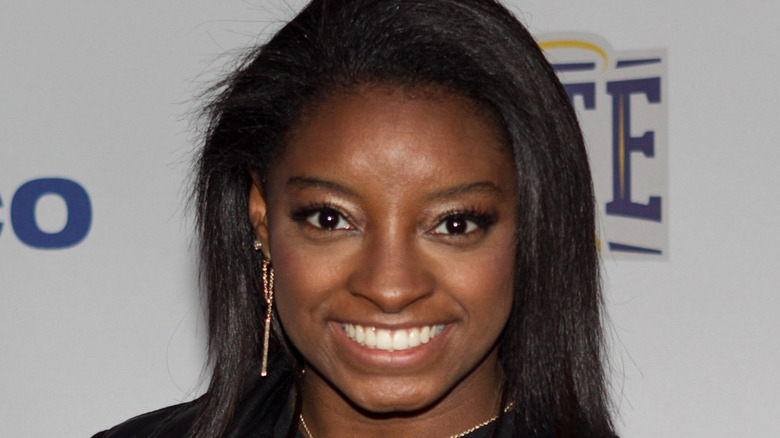 The Olympic Games in Tokyo may be missing a few things — such as in-person spectators, traditional beds, and the ability to go outside the Olympic Village – but in the end, the results will be the same. Top athletes will impress the world with their ability to push their bodies to the limit in their respective fields, and we can’t wait to watch. One of the competitors expected to bring home gold (probably more than one) is Simone Biles. At 24, the multi-decorated gymnast is relatively old for her sport, but her breathtaking performance at the Olympic trials proves that she’s still at the top of her game.

Because gymnastics focuses so much on the competitors’ body form and appearance, women traditionally wear makeup and colorful leotards as they balance, vault, and flip. While some protest the “beauty queen” aspect of the sport, many of the athletes say that looking good boosts their confidence. Former Olympian Aly Raisman has said, “I think it’s kind of cool to have that sort of badass feeling that you’re doing your sport and you’re really strong and powerful, but at the same time, you can feel really feminine and beautiful,” (via USA Today).

Tokyo 2020 will be no exception. The U.S. women’s gymnastics team debuted their official podium training leotards shortly before the Games commenced, and they’re nothing short of eye-popping.

The women's gymnastics uniforms are gorgeous, but not cheap 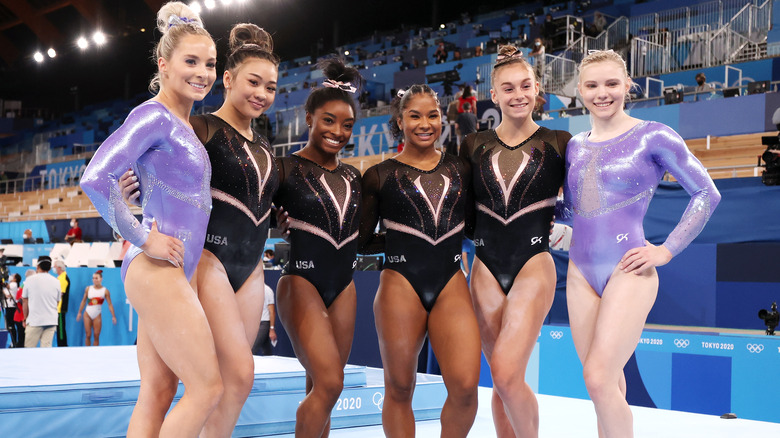 The U.S. women’s gymnastics team consists of Simone Biles, Jordan Chiles, Sunisa Lee, Grace McCallum, MyKayla Skinner, and Jade Carey. The first four will compete for the team championship as well as individual events, while Skinner and Carey will only compete in individual events like floor exercise and vault (via MSN). Appearing at the Ariake Gymnastics Stadium for training the day before the opening ceremonies, the team offered a glimpse of what to expect in their Olympic attire.

The women wore podium training leotards by GK Elite, the official designer of the team. The team competitors sported black and rose-gold leotards, while Skinner and Carey shone in lavender and silver. Each suit is specifically built to fit the woman wearing it, and each is hand-decorated with approximately 3,500 Swarovski crystals. In a statement, GK said that the team uniform was inspired by the Tokyo Olympic torch, and “a celebration of all that has led the USA to being a powerhouse gymnastics team and country paying homage to athletes and designs of the past, while preparing for the future,” (via the Daily Mail).

Although the company hasn’t disclosed the cost of the blingy leotards, it’s estimated that each one runs between $700 and $1,200. The women will be wearing a number of other leotards and outfits for their various events and medal ceremonies, so the total price tag for Biles and her teammates’ clothing comes to a cool $12,000 each.

For those who have Olympic gymnast dreams but not their wallets, fear not. PopSugar reported that GK Elite sells lookalike leotards for a far more reasonable $90 each.