Home » Fashion » What to Wear Next Year

What to Wear Next Year The spring 2021 fashion season, which began with the promise of normalcy in the form of Jason Wu’s show on a roof in front of a live audience back in September, finally came to an end in mid-December. It closed with the triple-header of a Bottega Veneta show bathed in eerie green light, an Alexander McQueen mini-film set in the graveled, muddy banks of the Thames, and a Saint Laurent show on the dunes of an unnamed desert, beamed over the brand’s social media channels.

In that Saint Laurent video, the models wandered in socially distanced single file through the empty landscape in sharp-shouldered black jersey and high heels that miraculously did not sink into the sand, like transplants from a before-times nightclub. It seemed like a metaphor for just how far away a return to business as usual actually was.

What has been the point of these shows, which have dribbled out as the weather has cooled? To break an old cycle, increasingly irrelevant? Perhaps. The fact that the above brands are owned by Kering, one of the big fashion groups, would suggest a breakaway faction that has critical mass.

They provide entertainment, to a certain extent, and escapism too. They also act as a placeholder, in the hope that after the vaccine, the runways return. Most important, they offer a proposal for what we will wear come spring, as we tiptoe out, blinking, into the sunshine and perhaps some more interactive form of social life — a way to be as we emerge from the Covid winter to communicate, once again, with the world.

Though it’s hard to imagine a 1960s floral organza baby-doll nightie with marabou trim, as dreamed up by Anthony Vaccarello, the Saint Laurent designer, is the answer.

On the other hand, the shows do kind of sum up where designers think fashion is going. Which is to say: in the direction of compromise. Loungewear, meet life. Take the signature styles of the various brands, cross-pollinate them with comfort dressing, and see what comes out.

In the case of Saint Laurent, some good things, especially a spate of jersey tunics: one kicking up a ruffle at the upper thigh with matching trousers to form a new sort of suit; another laced up in a nod to the famous Saharienne collection of the house’s founder; still another sheer, with that marabou trim. (It made more sense here, as it did on long stretch knits.)

Also some less-good things, like dressy bike shorts. They came sequined, done as a jumpsuit, paired with a blazer. Really, they should be left in the home gym. And the high-cut lace undie-shirt combos seemed like some sort of perverse play on the Zoom top.

A bronze bra top — the reissue of a piece of body jewelry from Claude Lalanne, the sculptor and frequent Yves collaborator — worn with a tuxedo was a more interesting idea. It cast that garment, abandoned in lockdown, as a gorgeous relic of a time most of us will never forget. Just as the squidgy rolls of fabric on the hips of the evening gowns at Bottega Veneta made them look like nothing so much as the long-lost cousins of Marie Antoinette’s bathrobe.

Indeed, the whole Bottega Veneta collection from Daniel Lee (filmed live, at Sadler’s Wells Theatre in London, with an audience so small it was more notional than anything) was a veritable plunge pool of tactility for both men and women. There were thick ribbed knits and plush parachute silks, lacy crochet and nubby car-seat beading, chenille and raw linen. All of it rendered in easy tank dresses and chunky cabled cardigans, little skirt suits with carwash fringe and long-waisted shirtdresses, generous trousers and shirts with padded seams. Plus huggable, pillowy handbags. 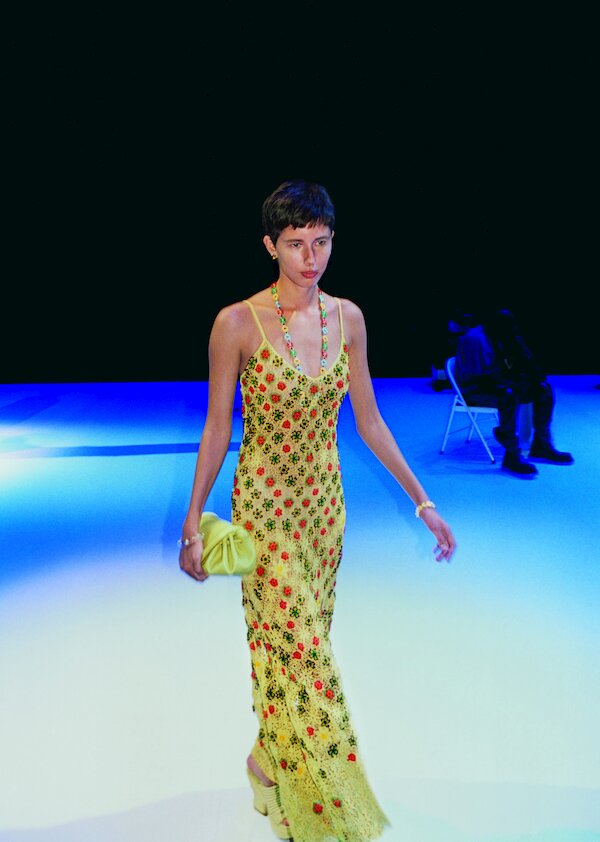 You can sink into them, or into the quicksand waters of Jonathan Glazer’s film for Sarah Burton at McQueen. Her collection was a bitter, elegiac nod to romance rendered in trench-meets-petticoat hybrids and corseted cotton, seguing into leather motorcycle jackets and peg-legged jeans, bustles and trains and tulle — the stuff of history treated with the casual elegance of the bed jacket, or the undershirt. (Speaking of which, there were some great white hybrid tops for men, composed of a tank layered under the neck and shoulders of a tee, like a whiff of armor.)

With it all came an implicit suggestion: If you can’t wear such once and future fanciness to a party — what does that even mean any more? — wear it to an assignation in the shadow of an abandoned bridge. Or just to plop down in the mud and watch the shadows go by.

It’s not a bad idea to take into the new year.