Why People Are Upset With Kamala Harris' American 'Vogue' Cover 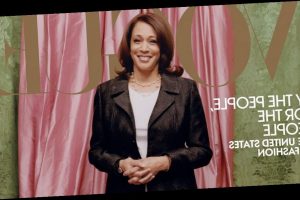 Not everyone is happy with Kamala Harris’ American Vogue cover.

Over the weekend the publication released its two February 2021 covers featuring the Vice President-elect. Shot by Tyler Mitchell, the first, which is the official print cover, showcases the former California senator in a black Donald Deal blazer and her signature Converse sneakers standing in front of a pink drape. Then there’s the digital cover, which is a tighter shot of Harris in a light blue suit with her arms folded in front of a gold backdrop.

Quickly, the print cover received a flurry of backlash on social media, with many criticizing the background, lighting, styling and overall quality.

“People, I’ll shoot shots of VP Kamala Harris for free using my Samsung and I’m 100% confident it’ll turn out better than this Vogue cover,” one person tweeted. “We can shoot it in my yard using natural sunlight and it’ll still be better.”

Who Is Vice President-Elect Kamala Harris? 5 Things to Know About the Politician Who’s Making History

Another wrote, “Kamala Harris is about as light skinned as women of color come and Vogue still f–ked up her lighting. WTF is this washed out mess of a cover?”

Many also compared it to her other magazine covers like Time and Elle, where the VP-elect appeared beautiful and prestigious. “So my father, grandfather and great-grandfather were photographers,” one user tweeted. “I grew up in my grandfather’s dark room. The Vogue cover is horribly lit, the backdrop lazy and in a color meant to wash out Kamala Harris’s beautiful skin tone. The VP-elect is a gorgeous woman: TIME and ELLE.”

One photographer took to Twitter to dissect the cover’s issues. “First, this is a weak shot. A lot of people have complained about the backdrop, but it could absolutely work if used correctly,” @ghosts_hmu wrote. “The pose is unflattering, Harris looks uncomfortable, the angle of the photograph is unsophisticated, and the lighting is poorly done.”

A source familiar with the shoot told Us that the blue suit picture was originally what the Harris team and Vogue agreed upon to be the cover image. “Kamala’s team was informed by Vogue that the blue suit photo would be featured on the cover, so they were surprised to see that the more informal portrait had ultimately been chosen instead,” the insider explains.

Reps from Vogue told Us, “The team at Vogue loved the images Tyler Mitchell shot and felt the more informal image captured Vice President-elect Harris’s authentic, approachable nature — which we feel is one of the hallmarks of the Biden/Harris administration. To respond to the seriousness of this moment in history, and the role she has to play leading our country forward, we’re celebrating both images of her as covers digitally.”

On Monday, the publication also wrote an online article explaining the significance behind the cover image as paying tribute to Harris’ Alpha Kappa Alpha sorority days.

Listen on Spotify to Get Tressed With Us to get the details of every hair love affair in Hollywood, from the hits and misses on the red carpet to your favorite celebrities’ street style ‘dos (and don’ts!)

are, Kama, people, upset, why, with
World News