Home » Fashion » Why you’re only seeing this shade of green

Why you’re only seeing this shade of green

The current spate of greenwashing on designer clothing racks has nothing to do with the environment and everything to do with trends trickling down from the international runways, as Meryl Streep memorably explained in the 2006 movie The Devil Wears Prada.

That dress you are seeing at your best friend’s wedding, that trouser suit on the morning commute and that blazer on your social media feed, it’s not emerald, it’s not apple, it’s not celery, it’s actually Bottega green, and it first appeared on the runways back in 2020. 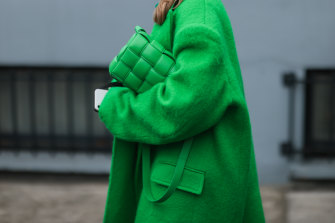 A Bottega Veneta bag and oversized coat spotted on the street at Paris Fashion Week in March.Credit:Getty

Inspired by the Italian luxury label Bottega Veneta, this green with more depth than apple and more punch than emerald, was sent down the runway by former creative director Daniel Lee for spring/summer 2021 and has inspired labels such as Carla Zampatti, Aje and Cue to deliver their own versions.

“Bottega is owning that green right now, undoubtedly,” says Eva Galambos, the owner of Parlour X boutique in Sydney, which stocks the label. “Everything from shoes, to bathrobes, have been selling strongly for 18 months. It is a beautiful green. It is an easy green, and it now belongs to them.”

It can belong to you too, if you’re willing to spend $4645 on a padded handbag or $1765 on black leather boots with a chunky Bottega green rubber sole.

“In the same way that you instantly know what Tiffany blue, Valentino red and Hermès orange are, you now have Bottega green and it’s here to stay. It’s already become a classic.”

Melbourne designer Effie Kats tested her variation on the colour of the moment at Australian Fashion Week, wearing an oversized coat in a kissing cousin to the shade described as Kelly green which draws its name from the popular Irish surname, first appearing in print in 1917. This is not to be confused with the Kelly bag from Hermès named after Hollywood star and Princess of Monaco, Grace Kelly. 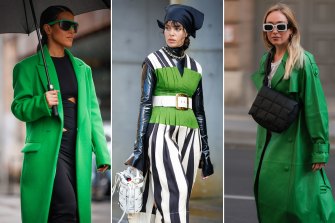 “Before Bottega Veneta, Kelly green wasn’t a shade that anyone touched,” Kats says. “Emerald green was far more popular, but people want something stronger that stands out today. Customers are tired of playing it safe. I knew I had to have a coat ready for Australian Fashion Week. I like to stand out.”

Along with offering the same dopamine hit, and instant social media recognition of millennial pink and sunshine yellow, Kats says that the green is easy to integrate into most wardrobes.

“It pairs incredibly well with neutrals and black staple pieces of clothing,” Kats says. “I’ve been stocking it for almost eight months, and it keeps selling out. There’s something lush about it that people can’t resist, especially after lockdowns. You can still wear it with tracksuits, if you feel like it.”

Rather than restrain herself to the green shade dominating trend reports, Aje designer Edwina Forrest has been reviving emerald, which was Pantone’s colour of the year in 2013 and was named by Etsy as the colour of 2022.

While Galambos is convinced that Bottega green is here to stay, resurfacing with the same cyclical intensity of animal print, crimson and cerulean blue, the label that started the trend has already moved on. Following the unexpected departure of Lee as creative director in November, incoming talent Matthieu Blazy held back on the colour for his debut in March, except for some bold knee-high boots.

“Well we are starting to see a lot of lilac,” Galambos says.