Home » Lifestyle » ‘A pod of four-legged dolphins’: the unleashed joy of dog beaches

‘A pod of four-legged dolphins’: the unleashed joy of dog beaches

It’s your dog Clancy writing from my beach holiday.

We’ve been here a week, which means I’m now virtually aquatic. As soon as we arrive at the beach, Man opens the car door and I leap out as if a starter gun has been fired, then charge toward the foamy stuff. I throw myself into the waves and start heading into deeper waters. If my next letter is from New Zealand you’ll know I’ve forgotten when to stop. 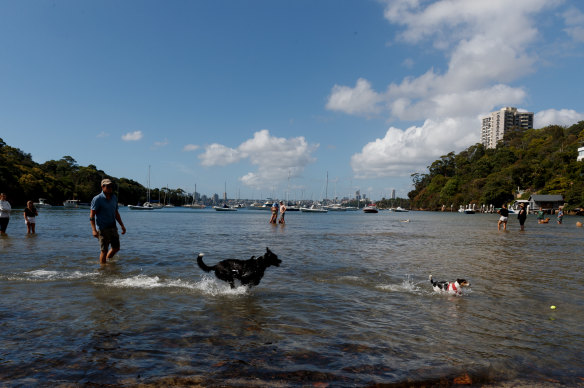 Dogs (and their owners) soak up the sun at Sirius Cove Beach.Credit:Nikki Short

There are restrictions, both of time and place, regarding the use of the beach by dogs. We’re permitted in the middle of the beach’s long curve, on a small section mostly unused by others, and only for the hours after 4pm. Some might be offended by such prejudice towards one species over another – this, I confess, was my first thought – but in practice, it creates a daily dog party.

Every dog in town is there, same spot, same time, as if an official invitation has been issued. Together we chase balls, or chase dogs that are chasing balls, then gambol through the water, our fur lit golden by the sloping light of the late afternoon. We leap high in the waves, sun-kissed, like a pod of happy four-legged dolphins.

As the sun drops in the sky, we head home, with salt-encrusted fur and sandy paws. I receive a vigorous towelling-down from Man, but he is unequal to the task. Fast forward a few weeks and I’ll still be leaving sandy mementos wherever I go.

I wish the beach holiday could last all year. There are more people in the household, for a start, so more pieces of dropped toast. On the best of mornings, it’s raining Vegemite soldiers. There’s also a toddler on duty, available for chasing and protecting. And there’s a whole new world to smell – of salt and sun cream; of fish and chips and juicy hamburgers; plus the occasional dead seagull. Enticing, one and all. 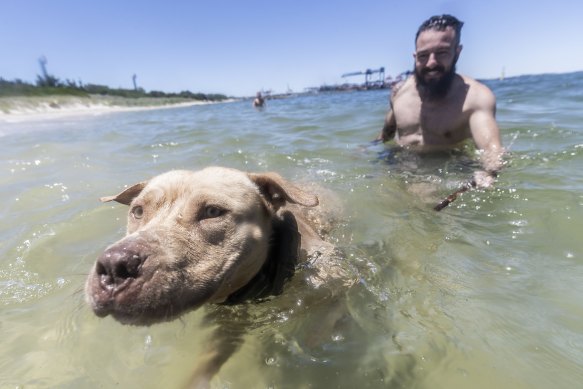 James Sciuriaga with his pup Thor at Foreshore Beach.Credit:Brook Mitchell

I like the holiday timetable, too. At the start of the day, we’re all keen to greet the day, so my breakfast is served with admirable haste. At 7am it’s placed in the bowl, and by five seconds past 7am it has been successfully inhaled.

At the other end of the day, what Man calls “drink o’clock” appears to move ever earlier, with the advantage that my dinner also moves earlier. I tuck into chicken and rice and think: “I guess it’s 7pm somewhere on the planet.”

The various dogs have their own preferences when it comes to entertainment. My friend Frankie, whose genetic lineage contains a nod to all the breeds of small dog, likes to dig downwards in the sand, her small body soon lost to sight as she excavates ever lower. OK, I might end up in New Zealand, but she’ll pop up in China.

The toddler refers to Frankie by her name: “Bye-bye Frankie,” he says with excellent enunciation. Meanwhile, he still refers to me as “woof”. Should I be offended? I’ve decided it’s a compliment. Frankie is just Frankie, while I am Woof, the quintessence and origin of all dogs, the dog-head if you will, the Woof that is the symbol of the whole canine tribe.

Either that, or Clancy is just harder to say than Frankie.

I fall into an idle reverie, wondering, when it comes to a beach holiday, about my favourite part of the day. I love the mornings – breakfast followed by a brisk walk around the headland, the happy sequels of children playing on the beach below, the damp smell of the coastal forest. And the evening is especially pleasant – my belly full, my limbs tired, and a cool sea breeze ruffling the Venetians.

And yet, like the lotus-eaters of Homer and Tennyson, my preference is for a perpetual afternoon. It begins with books and board games for the humans, yours truly dozing beneath the table, then it’s down to the beach for the 4pm party.

As Tennyson describes the scene:

“In the afternoon they came upon a land
In which it seemed always afternoon
All round the coast the languid air did swoon
Breathing like one that hath a weary dream.”

What could be better?

So Homer and Tennyson got it right – there’s a delicious, lazy enchantment to be had in the afternoon. I just wish those two poets had experienced an Australian beach holiday. Then they could have described the lotus eaters ultimate joy: a sunny afternoon, sometime in early January, somewhere on the east coast of Australia. Oh, that it could last forever.

Hope all is well,

To read more from Spectrum, visit our page here.

The Booklist is a weekly newsletter for book lovers from books editor Jason Steger. Get it delivered every Friday.