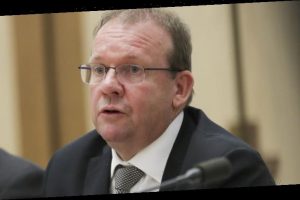 The watchdog in charge of keeping the government accountable for its use of taxpayer money says his budget has fallen so much some agencies might only face scrutiny once every 20 years and auditors are tolerating “uncomfortable” risks in financial statements.

Auditor-General Grant Hehir says over the next four years he has to cut the number of performance audits his office does, which in the past year has uncovered the sports rorts scandal and the $30 million paid for the Leppington Triangle land valued within a year at just $3 million. 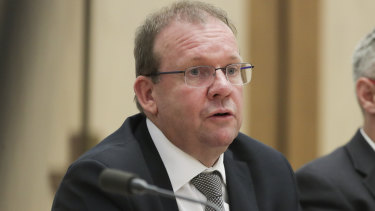 Auditor-General Grant Hehir says budget pressures have left him with no choice but cut audits, which he says contribute to a better performing public sector.Credit:Alex Ellinghausen

The cut will bring down the number of audits by a quarter, from a historical average of 48 a year to 36, the lowest number this century, bar 2016 when the double dissolution of Parliament meant fewer sitting weeks to deliver his reports.

“In effect, I am unable to provide the Parliament to the same extent with the evidence it has used to hold executive government to account, thereby reducing accountability and transparency,” Mr Hehir on Friday told a parliamentary committee reviewing the Australian National Audit Office.

Over the past two years, the performance audit section has lost 20 staff, equivalent to the capacity for eight audits. ANAO funding as a proportion of government spending is now half what it was 10 years ago.

“Should it be going up proportionately? I’m not arguing that, but I think it shouldn’t be going down,” Mr Hehir.

Since 2013, the Australian National Audit Office’s budget has been cut by nearly $6.3 million – or more than 22 per cent in real terms – although Mr Hehir told the committee “we probably wouldn’t use the word cut, it’s fallen”.

While the budget has shrunk, the number and complexity of financial statement audits the ANAO must do has grown. Mr Hehir said the budget squeeze meant he’d had to increase the risk tolerance of these financial audits to a point where he was “uncomfortable”.

As well as a reduced number of audits, their scope will be narrower, there will be fewer “positive audits” that could offer good lessons, and they will focus on higher-risk activities in large entities like the tax office and Defence.

“Many smaller agencies may not be audited for extended periods of time, potentially over 20 years,” Mr Hehir said.

“When we’re coming in, entities change things, they clean up their act, they get a bit more focused on issues and then, even more, the fact that they know we’re around drives changes in behaviour.

“What’s the outcome of audit work? In the end, a better performing public sector.”

Labor MP Julian Hill, the deputy chair of the committee, said the impact of the budgets cuts was shocking.

“Surely even the government muppets who voted for these cuts must now be shocked that the Commonwealth Auditor-General has said he is ‘uncomfortable’ with the level of risk he is being forced to bear in financial statement auditing,” he said. “This is serious stuff, alarm bells are ringing.”

The ANAO comes under the Prime Minister’s portfolio, making Mr Morrison responsible for funding decisions, although the role of Auditor-General has statutory independence. Previously, Mr Morrison said it would be premature to increase the ANAO’s budget before the committee review is done.