Andrews dreams of spring while haunted by the nightmare of autumn

Victoria’s COVID-19 drama played out on two separate stages this week with two markedly different narratives. On one stage, in his Spring Street media room, Premier Daniel Andrews painted a picture as sunny as the warming weather outside.

"It's about positivity, it's about optimism, it's about rebuilding," he said, grinning, on Wednesday. 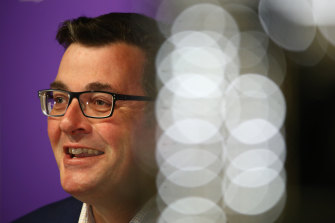 Regional areas of the state had just opened up and before us lay the prospect of eating outside once again on specially designed city streets, drinking with friends, enjoying a post-COVID spring. The price was just a little more deprivation for a little longer.

On another stage across town, the hotel quarantine inquiry was painting a darker picture as Emergency Management Commissioner Andrew Crisp, Chief Health Officer Brett Sutton and former and current police chief commissioners Graham Ashton and Shane Patton were dragged in forensic detail through the decisions they'd made in the autumn.

Email after meeting note after text message were pored over, revealing how hastily the hotel quarantine system had been cobbled together as the days shortened in late March.

Next week, the two narratives collide with Mr Andrews scheduled to swap stages, swear an oath, and answer questions before the inquiry.

In his marathon stint of press conferences, the Premier has sought to project control, courage and a sometimes belligerent competence. A new nickname for Mr Andrews, “Steely Dan”, has started doing the rounds among his fans on social media.

The survey of more than 2100 people found that while 51 per cent of those polled had lost work hours, 46 per cent endorsed the state government’s restrictive road map out of lockdown with 40 per cent opposed and 14 per cent undecided. Crucially for Mr Andrews, 58 per cent said they agreed that the road map was motivated by the best interests of Victorians.

But while the Premier projects proficiency, the hotel inquiry has laid bare the mess going on just a layer below him as his government attempted to implement the hotel quarantine policy over two hectic days, March 27 and March 28. 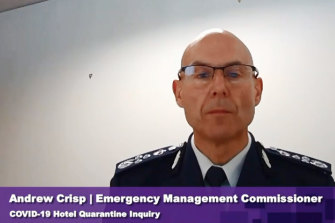 The unravelling of the government's narrative began on Tuesday when Mr Crisp gave evidence.

His statement on August 12 that “I did not seek nor did representatives of the ADF offer assistance as part of the hotel quarantine program” has been the foundation underpinning Mr Andrews' own comment to a parliamentary committee that it was “fundamentally incorrect to assert that there was hundreds of ADF staff on offer and somehow someone said no”.

Both men’s denials became significantly harder to maintain this week after a tape of one crucial March 27 meeting was played showing Mr Crisp being asked directly by a fellow Victorian public servant what role ADF troops would play.

His response was not to express surprise that anyone was making the offer. Instead Mr Crisp replied, “At this stage we can manage this … we don't see a need for boots on the ground".

A number of other references to "ADF" are made in various records of proceedings in the early days, including one made by Mr Patton after a conversation with his then boss Mr Ashton at 7pm on March 27: "ADF available re static guarding of those sites".

Federal government submissions showed the offers kept coming through April, May – when the first coronavirus cases escaped from hotel quarantine – and into June and July. They were repeatedly rebuffed.

'The benefit of hindsight'

It’s possible that ADF troops at Melbourne’s quarantine hotels would not have stopped Victoria's devastating second wave. But there is little doubt that the poorly trained, poorly equipped and poorly paid subcontracted security guards facilitated it.

A series of leaders, including Mr Crisp and Mr Ashton, told the inquiry they felt the health of Victorians could be safely guarded by contractors. The evidence shows they judged that poorly.

Professor Sutton said that some security staff did not trust health information about wearing PPE and that there were “concerns about using an alcohol-based sanitiser” because it was “against their religion”.

One nurse reported the misuse of PPE, and joint incident controller Andrea Spiteri told the inquiry that safety “policies and procedures” were in English while "many … security staff had language barriers”.

Professor Sutton said many guards were forced to work more than one job to make up an income and had large families and networks of friends, which created "additional transmission risks”. However, all these judgments were made only “with the benefit of hindsight”.

What should have been obvious from the start was that the emergency organisation underlying this policy – illustrated by a diagram of spaghetti-and-meatballs complexity – was deeply problematic.

Professor Sutton told the inquiry on Tuesday he wanted to be in overall command but the diagram shows him two or three layers from the top and only joined to those above him by a dotted line – whatever that means.

In his words, Professor Sutton did not have "line of sight" over key decisions and was not in charge of “infection prevention and control personnel".

He worried that quarantine was being run as a “logistics or compliance exercise” not a health exercise, and within two weeks of the program opening he endorsed an email warning of the danger. He did not know security guards were in charge of COVID-19 patients and he only found out about the May outbreak through the media. 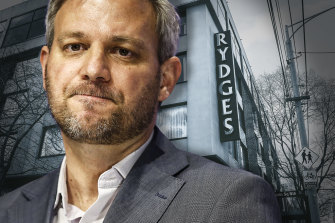 According to Jason Helps, Ms Spiteri's fellow health controller, the structure of the emergency operation was supposed to ensure consistent decision-making and accountability. In reality it did the reverse: “At times because of this structure it was difficult to track the origin of a decision, the role or position responsible and information, data or plans,” he noted drily in his submission.

The most difficult decision to track to its source is perhaps the most important – the call to put private security guards in charge. That decision was made quickly in the early afternoon of March 27 and then accepted by everyone as reasonable. What remains unclear is who made it.

On Tuesday, Mr Crisp described a 2pm meeting and an exchange of text messages that made it clear to him that it was Mr Ashton's "preference" that "private security be the first line of security" rather than police, the AFP or the military.

But on Friday Mr Ashton "absolutely" denied under increasingly frustrated cross-examination by government lawyers that he'd made the decision. His poorly-spelt text messages, tabled at the inquiry, suggest that between 1.12pm and 1.22pm he had been given "advise [sic]" by someone about a "deal" organised by the Department of Premier and Cabinet to use private security. Mr Ashton could not recall who had advised him, though he speculated it might have been Mr Crisp or Mr Andrews' department chief, Chris Eccles. Both men have denied it was them.

It’s sometimes said that success has many fathers but failure is an orphan. And so it proved this week.

But if it can ultimately be established that this "advise" to Mr Ashton came from Mr Eccles or someone else high in government, then the inquiry that Mr Andrews himself established might yet come back to bite him.

On Wednesday, Mr Andrews is expected to swap his familiar stage in Spring Street and relive the events of autumn at the inquiry. Outside, frustration is rising. People are angry, isolated, masked and jobless, their businesses failing around them. They are expressing it on the streets and on social media and in emails to Mr Andrews' MPs.

Government insiders say that despite the travails of recent weeks, nobody is pushing internally to replace the boss. As for the Premier, his entire focus is on flattening the curve of infections so it meets the implacable line of suppression.

Mr Andrews says his pursuit of the virtual elimination of the virus is being driven by fear of lockdown 3.0. His backbenchers surmise that he's set the bar so low because he does not trust his bureaucrats to keep Victoria safe with more than a handful of active cases. The events of this week at the hotel quarantine inquiry give us an inkling why.

But Mr Andrews will be betting that if spring turns to summer without another outbreak, he'll be able to direct Victorians' focus to the future – towards hope instead of blame.