Australia has gained enough international support to avoid UNESCO listing the Great Barrier Reef as an “in danger” World Heritage Site, with 13 countries supporting its move to delay the decision until 2023.

The United Nations Educational, Scientific and Cultural Organisation controls World Heritage listings and the 21 countries currently on its World Heritage Committee voted in June to back a draft ruling that the reef was in danger of losing its World Heritage status due to concerns over water quality and the impacts of climate change. 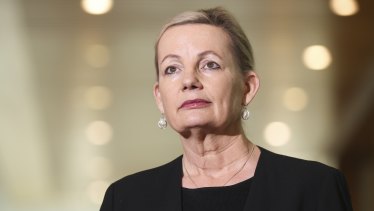 Sussan Ley appears to have gained enough support from UNESCO’s World Heritage Committee to block the Great Barrier Reef being listed as ‘in danger’. Credit:Alex Ellinghausen

The draft ruling is set to be decided by a vote of the Committee on Friday night, but Australia has proposed an amendment that would delay a decision until 2023, which has the backing of 12 countries – enough for a clear majority.

However, the vote is yet to be held, and it remains to be seen if further amendments are proposed and Australia’s proposal is actually endorsed.

Federal Environment Minister Sussan Ley is returning on Wednesday from a lobbying tour of Europe where she visited eight countries in an all-out push to block the in danger listing.

Ms Ley has argued the initial in danger process was politicised, it didn’t follow due process including a site visit, failed to take into account recent policies to improve water quality, and unfairly targeted Australia over its climate policy – which is an issue that must be addressed globally and also affects other World Heritage sites.

“If it is being proposed on the basis of the very real threat of global climate change, then there are any number of international World Heritage Sites that should be subject to the same process,” Ms Ley said.

“I agree that global climate change is the single biggest threat to the world’s reefs but it is wrong, in our view, to single out the best-managed reef in the world for an ‘in danger’ listing.”

An in danger listing would be controversial for the federal government ahead of the federal election, due before June next year, due to fears a downgrade could hurt international tourism when it resumes. The reef is a major money-spinner for Central Queensland electorates – pulling in more than $6 billion in tourism each year and supporting an estimated 60,000 jobs.

The proposed amendment would give Australia until December 2022 to submit its case for the health of the reef, to be considered by the Committee at its annual session in 2023, typically held in the middle of the year.

There have been three mass coral bleaching events since 2016 and the risks to the reef’s survival are significant. A recent Australian Academy of Sciences report said if the world warmed by 2 degrees only 1 per cent of corals would survive.

“Obviously there would have been a lot of trade-offs done here, on a taxpayer-funded trip, to avoid stronger action to protect the Great Barrier Reef,” Ms Zethoven said.

“The question is why does the Australian government need two years to report back to the Committee if it accepts urgent action is needed?” Mr Leck said.

Australia has a reputation for vigorous lobbying of the World Heritage Committee. In the late 1990s Australia successfully pushed back against UNESCO when it threatened to inscribe Kakadu National Park on the list of World Heritage in danger when the federal government approved the Jabiluka uranium mine within the park.