A group of Australian Indigenous people have gone to Geneva to address the United Nations in a last-ditch effort to prevent gas industry expansion on the doorstep of World Heritage-nominated rock art.

The traditional owners of Murujuga, also known as the Burrup Peninsula in Australia’s north-west, will appeal last week’s approval for the country’s most polluting project to continue for another 50 years, putting 4.5 billion tonnes of carbon into the air. 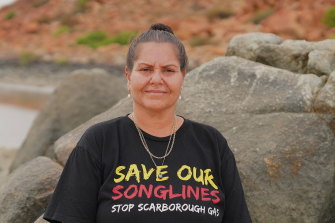 The site, in a national park near the mining town of Karratha in Western Australia’s Pilbara, is home to Australia’s largest collection of rock art, with 1 million pieces, some believed to be older than 30,000 years old. It is also home to major gas and fertiliser operations.

In a speech on Tuesday to the experts who provide advice to the UN’s Human Rights Council on the rights of Indigenous peoples, they said they were being silenced by gag clauses in agreements made over the land, which was not being protected by the state and federal governments.

Last week the state’s Environmental Protection Authority recommended the North West Shelf project, operated by Woodside, could continue operating to 2070 as long as it met several carbon targets on the way to net-zero operational emissions by 2050.

Operational emissions do not include “scope 3” emissions, created when the gas is burned by end users, mostly in Asian countries.

The watchdog also recommended oxides of nitrogen emitted by the Karratha Gas Plant, which are potentially damaging to the World Heritage-nominated rock art site, be lowered 40 per cent by 2030.

The Karratha and Pluto gas plants, both operated by Woodside, contribute to more than 90 per cent of the nitrogen emitted on the peninsula.

Not all Traditional Owners for the area are happy with the EPA’s decision.

A former chair of the Murujuga Aboriginal Corporation, an organisation made up of five language groups that takes the central role in negotiating with industry and government over the future of the site, was part of a group of 27 custodians who wrote an open letter this year seeking Woodside pause all Burrup developments until “free, prior and informed consent” was given.

Mardudhunera custodian Raelene Cooper said Woodside had ignored its calls and selectively engaged with Aboriginal corporations compromised by industry funding and gag clauses, which did not represent those who wanted to protect their culture. 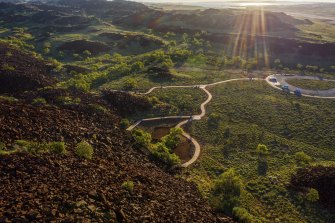 The Art Viewing Trail that takes visitors to see parts of the outdoor gallery. Credit:Karratha Tourism and Visitor Centre.

“After all the concern around the destruction of Juukan Gorge, we are outraged that the same laws are still being used to enable the destruction of our Murujuga Gnurra – the world’s largest and oldest outdoor art gallery with deep and continuing spiritual significance to our people,” she said.

A Woodside spokeswoman told WAtoday in March that extensive surveys conducted with Traditional Owners showed the construction of its projects would not impact any rock art.

She said the company respected diverse views within the community and was pleased with the level of support it had.

Cooper and Kuruma Marduthunera woman Josie Alec are in Geneva this week to talk to the United Nations’ expert mechanism on the rights of Indigenous peoples about impacts to Murujuga by industry including the removal of rock art when infrastructure was built on the peninsula.

In a speech on Tuesday to the expert mechanism, which provides advice to the UN’s Human Rights Council, Cooper said Traditional Owners were silenced by gag clauses in a 2003 agreement with the state government over the land.

“We are here to pass down knowledge for a better understanding of First Nations history and for the protection of Mother Earth and all her people,” she said.

“In conclusion Mr Chair, I make the recommendation that the free, prior and informed consent of First Nations custodians be guaranteed through active consultation about any new industry on our Country.”

The recent EPA report, which is open for appeals until July 21, recommended Woodside prove its emissions are not accelerating the fading and weathering of the rock art.

The watchdog also wanted to see alternative locations used for future industrial developments in the region rather than on the peninsula, such as a nearby industrial estate.

Murujuga Aboriginal Corporation has welcomed conditions suggested by the EPA that would require them to be consulted when the company submitted and reviewed management plans for key environmental factors.

WA Environment Minister Reece Whitby said last week gas would be a transitional energy as the world shifted to renewables, but he understood the importance of decarbonisation.

“It’s absolutely fundamental to where we need to be, as you know we’re transitioning out of coal and then the next energy source to transition out will be gas,” he said.

“But I think there will be a period of transition for providing that firm backup power that is needed while we wait for technology to increase in batteries or possibly pumped hydro.

“My ambition is to decarbonise as quickly as possible.”