Home » Lifestyle » Big promises on big hospitals, but little progress on little ones

Big promises on big hospitals, but little progress on little ones

None of the 10 community hospitals promised by Premier Daniel Andrews on the eve of the 2018 election campaign have been built or upgraded, despite the Victorian government unveiling billions of dollars in new health spending.

Labor committed to build or improve facilities in Whittlesea, Craigieburn, Cranbourne, Eltham, Fishermans Bend, Pakenham, Point Cook, Sunbury, Torquay and Phillip Island at its last campaign launch, but four years later, construction has started at only one of the facilities, in Cranbourne. 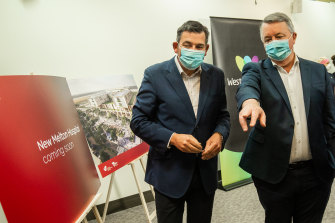 Premier Daniel Andrews and Health Minister Martin Foley at the site of the Melton Hospital.Credit:Scott McNaughton

In the lead-up to this year’s November election, Labor is promising $900 million to build a hospital at Melton in Melbourne’s booming outer west to treat tens of thousands of people a year, with a 24-hour emergency department, 100 medical and surgical beds, and intensive care unit.

On Wednesday, at the Melton hospital site, Andrews said: “This is a massive project. It is a big investment … to make sure the west has got the best, and that’s what we are all about delivering.”

Labor first promised to build a public hospital in Melton before the 2018 election, when it also promised the 10 smaller community facilities.

Almost four years later – and with six months to go to the election – the government this week said construction at Cobblebank, on the outskirts of Melton, would begin within two years and be completed by 2029. Less than a year ago, Health Minister Martin Foley said the hospital would be fully operational by 2026-27.

The state budget, delivered on Tuesday, included $12 billion to fix Victoria’s ailing health system in what the Premier and Treasurer Tim Pallas called a “pandemic repair plan”. Labor is shaping to fight the election on health, with money pledged to address staff shortages and reduce triple-zero call wait times.

This week’s budget papers show the government expects it will have spent just $94 million on the 10 community hospitals by the end of this financial year, $54 million less than expected a year ago.

Land needs to be acquired and locations identified for at least three of the 10 community hospitals, which are smaller facilities intended to treat patients who are not critically ill. 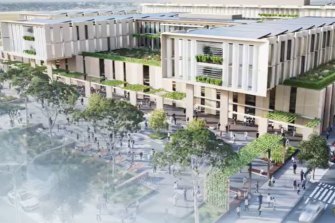 An artist’s impression of the Melton hospital announced by Labor.

While the government has named its preferred site for the Pakenham hospital, its land acquisition is being challenged in the Supreme Court.

A government spokesman said construction was expected to begin “at most sites this year”.

“We made a commitment to deliver all 10 community hospitals by the end of 2024, and despite the challenges and delays associated with COVID-19, we are well on our way to meeting this commitment,” he said. 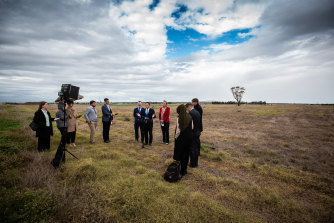 Opposition Leader Matthew Guy at the site of the Melton hospital on Wednesday.Credit:Scott McNaughton

“Four years ago, Labor said they would build a hospital on this site,” Guy said. “They are just stringing along the people of Melton.”

Marcus Watson, a Melton-based GP who is part of the Build Melton Hospital advocacy group, said he was disappointed the government had not yet started to build what was a desperately needed facility.

“The urgency of the project does not seem to be sinking in,” Watson said.

“They have had four years since the last election, and all we’ve got to show for it … is an empty paddock.”

Questions have been raised about one of the promised community hospitals, with the government now searching for a new site.

Documents obtained by the Friends of Apollo Parkways group under freedom-of-information laws show Foley bypassed two sites for the Eltham Area Community Hospital that had been recommended by government analysis to select a site. That site has since been blocked by Nillumbik Council.

The Victorian Building Health Authority ranked the Eltham site 62 per cent suitable – below two other shortlisted sites that ranked 70 per cent and 85 per cent – because of its “relative isolation, the lack of public transport and limited nearby amenities”, according to the analysis.

Grant Brooker, of the Friends of Apollo Parkways group, which opposed the site initially selected, questioned why the land had been chosen. “This promise is now two years late because of all the time wasted pursuing an option that was clearly flawed,” he said. 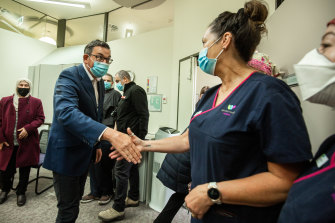 Dr Roderick McRae, Australian Medical Association Victorian branch president, praised the idea of the community hospital program and said it would deliver what the premier had been spruiking over the past week: the treatment of patients closer to their homes.

“Community hospitals take the load off the major Melbourne hospitals, which were under pressure pre-dating COVID, and there was an awareness of those ongoing pressures,” McRae said.

“They allow for treatments for simpler procedures closer to home and as a consequence, it’s supportable and it’s a good investment.”

“There have been years of mismanagement, and now Daniel Andrews is more interested in PR and spin rather than sorting out the health crisis that is putting the lives of Victorians at risk,” Crozier said.