Home » Bridesmaids were ordered to ‘hit the gym’ if they’re not a size 8: Reddit

Bridesmaids were ordered to ‘hit the gym’ if they’re not a size 8: Reddit

Engaged couples are forced to postpone their weddings due to social distancing measures.

A bridesmaid reportedly dropped out of a wedding after her friend made her wedding party weight contingent.

The controversial demand was captured in a three-part screenshot that was shared to the “Choosing Beggars” subreddit – a Reddit thread that’s dedicated to sharing stories about “people who are being way too picky when begging for things.”

According to the disgruntled and anonymous bridesmaid’s post, the aesthetically concerned bride-to-be wrote that anyone in her bridal party above a size 8 will have to lose weight to participate in her wedding.

“I handpicked all the dresses [for the bridesmaids] that will be there and they will all be a size 8. So if you’re not a size 8 I recommend hitting the gym,” the bride reportedly wrote, according to the first screenshot. “No offense to anyone but I have had this planned since I was in diapers and want it perfect.”

The bridesmaid who shared the outlandish order explained to Redditors that she dropped out of her friend’s bridal party because she’s “a size 12 with no plans on dropping to a size 8 by December.” 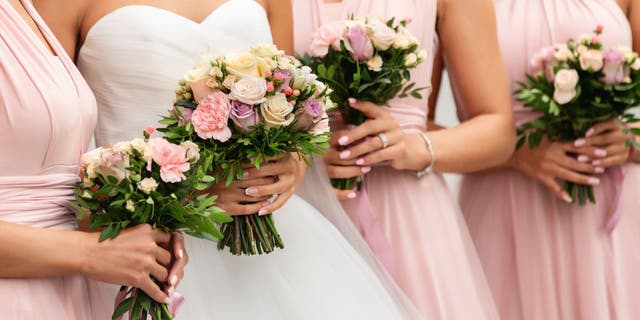 A bridesmaid reportedly dropped out of a wedding after her friend made her wedding party weight contingent. (iStock)

The bride, whose identity was redacted from the screenshots, had other stringent demands for her bridal party’s appearance.

On the day of her wedding, the bride is expecting her bridesmaids to have short and uncolored nails and shoulder-length straight hair.

“If your hair is short get extensions,” the bride reportedly wrote in the second screenshot.

Fake tans are also not allowed at her event along with kids. A single flower girl will be in attendance for the ceremony, though when her flower-throwing duties are done she will be promptly taken home.

Outside of what the bride wants her Oklahoma wedding to look like, she’s expecting each member of her bridal party to donate $500 toward her Hawaiian honeymoon.

“I’m sorry if this seems like [a lot] of demands but this [is a] special day and [I] just want it like I always pictured. Plz be respectful and we will have an awesome time,” the bride wrote at the end of the third screenshot. “Love you guys can’t wait to be a wifey.”

Several users on the website did not hesitate in labeling the bride a “bridezilla.”

“I’ll take ‘Marriages That Last Less Than a Year’ for $500, Alex,” one of the top commenters joked.

“No one cares about your wedding as much as you do … That is just reality,” another Redditor quipped. “Obviously, reality isn’t in her lexicon.”

Meanwhile, a different user suggested the bridesmaid “hit her back with a $600 wedding appearance fee.”

Other Redditors questioned what would happen to bridesmaids who are smaller than a size 8 or have hair that’s longer than shoulder length.

“Would you have to gain weight and cut your hair?” One user questioned.

However, the bridesmaid who dropped out of the bridal party was unable to provide an answer.