Home » Lifestyle » Business as usual at Venice Film Festival? Not even close

Business as usual at Venice Film Festival? Not even close Venice Film Festival has always been long on spectacle and glamour, which is now made all the more conspicuous by its absence. Glamour suited the world's oldest film festival, which is the first major festival to go physical in the time of COVID-19.

A "miracolo" is how Cate Blanchett described it in her first press conference as president of the main competition jury, adding that it was important to be courageous. But Venice 77 looks very different from the 76 editions that preceded it. 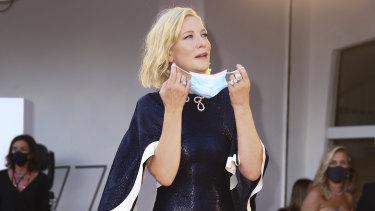 Jury president Cate Blanchett posing for photographers on opening night of the festival on September 3.Credit:AP

Most noticeably, there is the wall. The red carpet leading to the Palazzo del Cinema's foyer is shielded by a tall wall, with photographers entering through a rat run to line up inside and snap the passing celebrities. The impression on the TV news is that this is business as usual but of course it isn't: nobody can see the celebrities, let alone beg an autograph.

A few fans hang around the doors of The Excelsior, the Moorish-style hotel opposite the Palazzo where there is some chance of seeing a star, but there's none of the usual gaggles of teenagers camped all day along the carpet, ready for the evening's action.

Before it started, there was a widespread disbelief that an event notable over the years for its muddling organisation would ever manage to orchestrate social distancing. Come the first day, however, it was astonishing to see how the Venice Lido's cinema precinct had been remade.

Rat runs led in and out of the theatres and bottles of hand sanitiser were everywhere. On all roads leading to the cinemas, just in front of the bag-searchers and the scary officers lolling around with military-style weapons, there was a new Maginot line of security officers taking everyone's temperature. So far, apparently, so good. It's been six days and no track-and-trace crises yet. 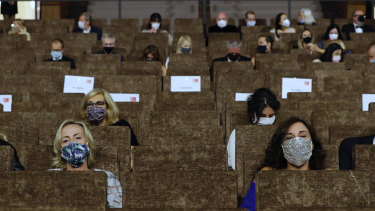 Guests wearing face masks in one of the cinemas. Credit:AP

Given that Hollywood can't be here, Blanchett is the biggest star on the Lido, along with Tilda Swinton who is receiving a Golden Lion for lifetime achievement. Notable rising stars include Maya Hawke, daughter of Uma Thurman and Ethan, who appears in a film called Mainstream by Gia Coppola.

Vanessa Kirby, recently seen playing Princess Margaret in The Crown, is having a moment with two features in competition. In Kornel Mundruczo's Pieces of a Woman she spends 24 minutes onscreen in the late stages of labour, which has become quite a dinner-table talking point.

But there are none of the usual Hollywood legends here for the prosecco parties. Of course, there must be parties of some sort, because you can still spot women in complicated evening wear on their way somewhere. The usual parade of extreme fashions has dwindled to a trickle – to the point where one woman in a PVC ankle-length sheath was pursued the length of the cinema precinct by a photographer clearly short of street shots. 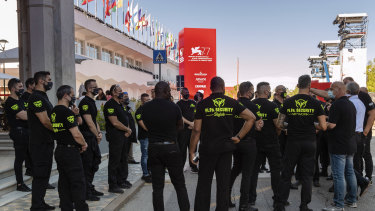 A security briefing ahead of the start of the festival. All guests have their temperature checked on arrival. Credit:AP

Inside the theatres, the mood is similarly muted. All seats have to be booked from 72 hours ahead. Bookings are online only. Only every second seat is available; in cinemas with seats that flip, the intervening seats are bolted shut. About half the usual numbers are here – maybe 6000 accredited visitors – and there are twice as many screenings, so it all evens out. 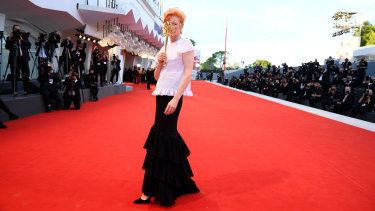 Tilda Swinton put a unique spin on masking up at the festival. Behind her, photographers line up in front of a tall wall blocking the view for passers-by. Credit:Getty

Because everything has to be booked, there is no reason to queue for an hour or more to be sure of getting in. Judging by the general enthusiasm for this queue-free new order, this could be the future of film festivals, virus or no virus.

Prizes are awarded next Saturday, with quite a lot of smart money on a Bosnian film about the war called Quo Vadis, Aida? to win the Golden Lion; this is definitely a festival of talents rather than studios. There are no Australian contenders; the one Australian film screening is The Furnace in the festival's Horizons section for experimental and emergent talent. Most of the press agree the programme is stronger for being mostly obscure but, more than anything, are just happy to be back in the cinema.

On the first day, Cate Blanchett said she wanted to show solidarity with filmmakers who were persevering through lockdowns and cinema closures to complete films. More challenges for filmmakers lay ahead, she stressed. "But challenge is in our DNA. If any industry will emerge more resiliently and creatively, it will be the creative arts and the film industry."