The nasty name-calling and false conspiracy theories about Kamala Harris began almost immediately after her announcement, but Cecile Richards and other female leaders are fighting back, hard.

Cecile Richards, the co-founder of Supermajority, and eleven other female leaders, knew long before the historic announcement of Kamala Harris that sexist coverage of Joe Biden’s Vice Presidential choice was coming. They knew, that whichever of the highly qualified women he was vetting was chosen, they would be subjected to an onslaught of insulting, unequal treatment by TV news anchors, print and digital media reporters and, oh yes, by President Donald Trump himself -especially if Biden chose a woman of color.

But Richards and the eleven other co-founders of We Have Her Back were certain that American “women had had it. They wanted none of it.” None of the sexism and racism. Cecile believes that Donald Trump and Mike Pence’s sexist and racist comments and policies “will take this president and vice president down”.

The female leaders of the new organization, ‘We Have Her Back’ were determined that there not be a repeat of the 2016 presidential campaign in which Hillary Clinton endured non-stop and unequal commentary from the media and Trump about her “likability”, her looks, her pantsuits, her backside and her “honesty”: note- did any of the media ever question Donald Trump’s “likability” or honesty ? Instead, they wanted to ensure that whoever the female vice presidential candidate would be, she would have committed and loudly vocal allies.

Richards, who also leads Supermajority, a female organization mobilizing the female electorate to vote in 2020, joined forces with TimesUp CEO, Tina Tchen, Alexis McGill Johnson, the Acting President of Planned Parenthood, Valerie Jarrett, a Senior Adviser to President Barack Obama and eight other female leaders to fight tooth and nail against sexist media coverage of Kamala Harris. They formed a new take-action group called ‘We Have Her Back’ .

“We aren’t going to let a single racist, sexist article go unanswered. This is how these things metastasize”, Richards tells HollywoodLife in an exclusive interview. “We are in touch minute by minute. We are organized and we will be monitoring.” 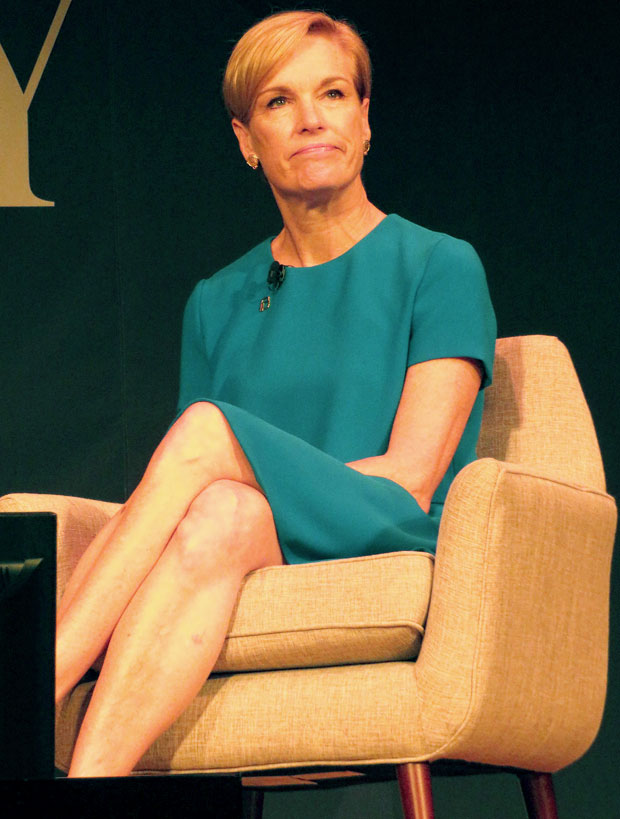 The group already has its hands full. The sexist and racist insults have come fast and as well as subtler bias in the media coverage of Kamala Harris. Donald Trump led the misogynistic attacks immediately. He labeled Harris “nasty” and “nastier” four times in his first press conference after Biden’t much-applauded announcement of her vice presidential candidacy. Trump claimed without evidence that “she left angry, she left mad” after she dropped out of the Democratic presidential primary, invoking the insulting “angry Black woman” trope. Amplifying that trope, he called her a “mad woman” in an interview on his favorite network, Fox News.

Finally, he launched into “birthism” lies, seeking to cast doubt on whether Harris, born in Oakland, California, was an American native. In other words, he fueled a baseless conspiracy theory, exactly like the conspiracy theory he championed about President Barack Obama, who he tried to claim wasn’t a native American, despite the president being born in the state of Hawaii.

The Kamala attacks continued coming from Fox News anchor Tucker Carlson, who deliberately mispronounced and mocked her name, from Senator John Kennedy from Louisiana who described her as “like Congresswoman Ocasio-Cortez, but smarter and without bar-tending experience” and from Donald Trump’s son, Eric Trump, who liked a disgusting tweet, calling Senator Harris a “whorendous pick”!

Tina Tchen, the CEO of TimesUp, and a co-founder of ‘We Have Her Back’, came out swinging in an interview on MSNBC, in response to all of the slurs. “We’re not going to just sit back anymore, this isn’t just about Kamala Harris. We need to call it out. When you hear women leaders being called “nasty” and phony, it trickles down to the idea of who can be a leader in this country… it’s about the aspirations of girls across this country.”

It was exactly to try and head off the media’s biased reporting on female leaders like Harris, and on sexist and racist insults that would be leveled at her, that ‘We Have Her Back’ was founded this summer. The group wrote and sent a letter (read here) on August 7, to media organizations warning them not to subject the female vice presidential candidate to “stereotypes and tropes about qualifications, leadership, looks, relationships and experience.” They especially called out the media for amplifying and weaponizing those stereotypes and tropes for Black and Brown women.

She points out that women comprise a majority of the electorate today. In the 2012 general election, 67% of women were registered to vote and 58.5% voted compared to 63.1% and 54.4% of men. The number of female voters has exceeded the number of male voters in every presidential election since 1964. As well, women have been about 15% more likely to support Democratic party candidates than Republican candidates in every election since 1996.

Now, there is an historic gender gap among 2020 voters. Joe Biden is leading Donald Trump among female registered voters by 59% to 35% as of June, according to New York Times polls. “Women, led by Black women, will decide this election”, asserts Richards, who enthusiastically supports Biden’s selection of Kamala Harris as his vice presidential candidate. “Women were already ready to defeat Donald Trump. Now, they are ready to elect Kamala Harris.”

Supporters to the Biden/Harris campaign certainly share her excitement. The campaign announced that it raised $48 million in the first 48 hours after Biden announced that Senator Harris was his vice presidential nominee. A new Washington Post/ABC News poll reported on Aug 16, that 54 per cent of Americans approved of Biden’s choice.

Richards believes that the reason the excitement level for the Biden/Harris ticket is so high, is not just because Biden chose a female nominee; after all John McCain did the same thing when he selected Sarah Palin as his VP candidate in the 2008 election, but because Biden presented his choice clearly as an equal. “What came through so loud and clear is that this is a partnership. He wants a vice president who has her own opinions,” she asserts. “We [women] need a political partnership. Women have wanted that for a hundred years, since we got the right to vote.”

Biden himself called Harris “my partner” in his campaign, in an announcement. He wrote “I need someone working alongside me. Harris is smart, tough and ready to lead. Kamala is that person”, in an email to his supporters.

Richards and the eleven co-founders of ‘We Have Her Back’ know that monitoring media bias against Harris in both blatant and subtle ways will be a huge and non-stop task. Valerie Jarrett has already been on CNN with Wolf Blitzer, as he asked her about Trump’s insinuations that Harris falsely isn’t an American citizen, when in fact she was born in Oakland, California. Jarrett wasn’t having it and politely but firmly shut down Blitzer’s efforts to give attention to the lie, by pointing out that it was a distraction, when voters were far more concerned with the pandemic, unemployment and Trump’s disruption of the postal service. In other words, she was pushing back hard on Blitzer spreading the racist conspiracy theory, instead of focusing on actual factual news.

You can also do that AND make sure to vote in the 2020 election. If you aren’t registered yet, you can do it right now in the Register to Vote module below. Then, make sure to vote early in person or send your mail- in ballot as soon as you receive it, to make sure it is counted.