Can’t cook, slow cook! Chef reveals tips that will help ANYONE turn out a delicious meal – including brining to avoid dry meat and staggering when you add the veg to stop it going soggy

With millions of stressed Britons juggling work with homeschooling, the humble slow cooker is seeing a resurgence in popularity among those seeking quick and easy yet nutritious meals.

According to Twitter analysis conducted by Tesco, conversations around the kitchen appliance are currently up by 160 per cent compared with the same period last year.

Slow cookers allow food – typically comforting stews, casseroles and curries – to be cooked at a low, steady temperature, similar to braising in an oven.

And with more of us now preparing meals at home amid the pandemic, FEMAIL sought the guidance of Tesco’s executive head chef Jamie Robinson to ensure every one-pot dish you produce is a family favourite. 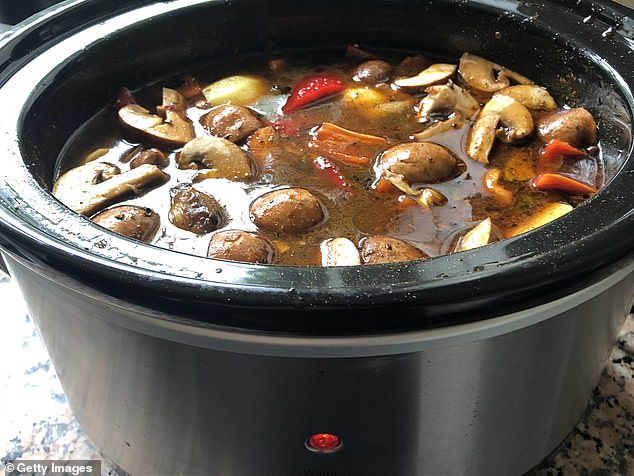 According to Twitter analysis conducted by Tesco, conversations around slow cooking are currently up by 160 per cent compared with the same period last year. Pictured: stock image

Choose cheaper cuts of meat for a purse-friendly dish

Slow cooking is the perfect opportunity to use cuts of meat you wouldn’t usually go for, and the cheaper cuts are great for this style of dish – making slow cooking a very affordable meal for those on a budget.

When picking your meat, I have two top tips; first, always go for something with a good level of fat on it, as this will prevent the meat drying out.

Second, make sure you brown off your meat by searing it in a frying pan first; the more colour it gets, the juicier the meat will be. 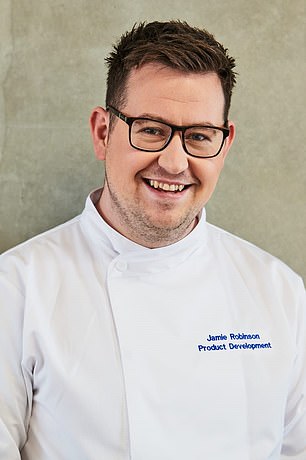 Brine your meat for a more tender, succulent dish

I like to brine my meat – or whatever protein I’m adding – when doing a slow cook.

I generally add 10 per cent salt and 5 per cent sugar to cold water and mix until dissolved. I then cover my protein in the brine and leave it in the fridge for up to four hours before cooking.

Not only does this flavour and tenderise the meat, but it also helps retain moisture through the cook, leaving you with the juiciest most succulent dish. I would recommend this route when using leaner cuts of meat to avoid them drying out.

Make the most of the multiple functions

Many slow cookers will have different cooking functions, and I suggest making the most of them while you cook your dish.

Vegetables and meat are best on the sauté function, allowing them to cook on a high heat quickly.

Then change to the slow cook setting for the rest of the recipe, layering the ingredients according to their cooking time. And don’t forget to use the keep warm function when it’s ready!

Leave your slow cooker to do its thing, and don’t keep sneaking a peek. Pulling the lid off will release some of the heat, increasing the cooking time and spoiling the magic of the slow cooking method.

Trust the process, and yourself!

Add a dash of wine for ultimate flavour

Once your meat and vegetables are caramelised, add a stock cube or a dash of wine to deglaze the pan and lift all those sticky bits off the bottom – this is where all the flavours are!

I love to use wine for this as it adds another layer of punchy flavours to the dish.

Tie herbs together to make your own ‘bouquet garni’

Aromatic herbs can help to boost the flavour of a dish – anything from bay leaves, thyme, rosemary, oregano, sage and parsley stalks.

I recommend tying them together with a string and adding them at the beginning, then removing them before serving.

This is called ‘bouquet garni’ and means you get all the flavour, but none of the bits!

Bouquet garni is best made fresh. However, if you prefer to make several bouquet garni at once for ease, you can wrap them tightly in cling film and freeze them in well-sealed freezer bags or containers to help prevent dehydration.

Leave out the chicken breast because it can overcook

Although cooking in the slow cooker is pretty fail-safe, there are a few key common mistakes to watch out for.

If you are using lean meats such as chicken breast, it is possible to overcook the meat which will leave it quite dry. For slow cooking I tend to favour less leaner cuts, such as chicken thighs in place of breast meat.

You can also under-cook the meat too, leaving you with a rubbery texture, so it’s always best to assess the texture before serving to ensure it’s the perfect consistency.

Don’t season until the very end

I always add salt and pepper right at the end. If you add too much seasoning too early, it could become too strong as the dish cooks on. Remember you can always add more but you can’t take it away.

Stagger your veggies to avoid them going soggy

There are two ways to use vegetables within your slow cooking dishes. Whenever I am slow cooking I use the veg in two different ways.

I generally start all of my slow cooks with onion or shallot, leeks and garlic, and sometimes carrots too.

I like to sweat this down until they caramelise to help really strengthen the base flavour of my dish. When using vegetables in this way, the aim is to actually get them to break down and disappear into the base of your sauce.

Any vegetables that you want visible in the finished product should be added later.

I like to group these veggies up in order of hardiness and then stagger how I add them. Root vegetables always go first, such as big chunks of carrots, celeriac and swede, along with the woody herbs like thyme and rosemary. These should go in one hour before you finish your slow cook dish.

Then the slightly less hard veg, such as peppers, courgettes, cabbages, cauliflower and broccoli should go in 20-30 minutes before you finish your dish, though the duration depends on the size of the chunks – smaller pieces require less time, while bigger chunks take longer.

The last to be added is the softest veg, such as asparagus, green beans and peas, and herbs such as fresh parsley and basil.

By grouping the vegetables and herbs like this you will really layer the flavour of the dish to make it super tasty, but also avoid the dreaded mushy veg!

Double-up your slow cooker as a bread maker

Bread is another great thing to make in the slow cooker – it’s an easy one to do before a long chilly winter walk and great with a big hot bowl of soup.

When slow cooking the flavours can become deep and very rich, so balancing the end product is really important.

While most people use salt and pepper to season their food, a really important thing to think about – especially in rich slow cooks – is acidity.

A little squeeze of fresh lemon or a splash of good quality vinegar (not malt) can really lift and transform a dish. Definitely one to try it out next time you are in the kitchen!

As much as a slow cooker is great for cooking meat stews and casseroles, it’s also very good for a few sweet treats.

Cooking fudge in the slow cooker is a great alternative way to make it, and because it’s temperature controlled, you are a lot less likely to burn it.

Additionally try a dessert like a bread pudding or an apple crumble.

Heat half the oil in a large frying pan. Season the meat and cook in the pan for 6-8 mins, until browned all over. Remove with a slotted spoon and put in a slow cooker.

Add the remaining oil then the onion and bacon. Sauté for 4 mins before adding the garlic and carrots and cooking for a further 3-4 mins.

Pour in the red wine and stir to help de-glaze the pan. Then stir in the stock.

Pour the vegetables and liquid over the beef in the slow cooker.

Add the sprigs of thyme and cook for 8 hrs on a low heat, until the beef is very tender. Serve with steamed cabbage and mashed potato. 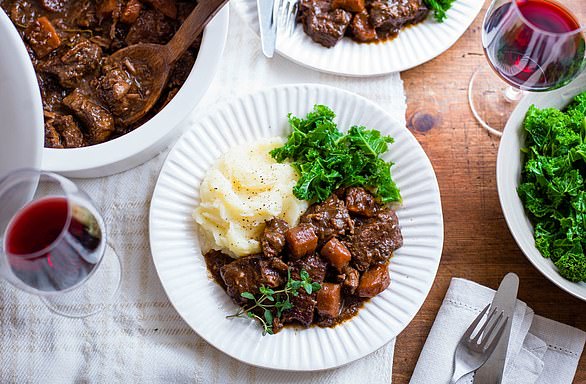 Beef bourguignon is a classic French dish from the region of Burgundy and is traditionally made with a full-bodied Burgundy wine. The meat cooks slowly in a mix of wine and beef stock, which is reduced to a tasty thick sauce. Tesco’s easy slow cooker recipe is served with steamed cabbage and creamy mash