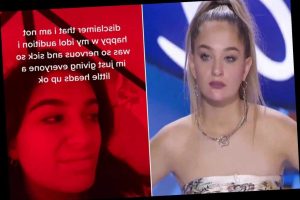 Claudia Conway is “not happy” with her highly anticipated “American Idol” audition, telling fans she felt “nervous and sick” during the process.

The daughter of former President Donald Trump’s adviser Kellyanne Conway and The Lincoln Project co-founder George Conway, Claudia took to TikTok to open up to fans about the audition, writing, “Disclaimer that I am not happy w my idol audition. I was so nervous and sick so I’m just giving everyone a little heads up ok.”

The 16-year-old details her upbringing to the show’s judges in a newly released, sneak-peak video obtained by People magazine.

In November, Claudia hinted she was auditioning for the reality show.

That was months before the police showed up at her family’s mansion in Alpine, New Jersey, prompted by the teen posting a series of videos claiming her mother Kellyanne, 54, was being abusive and that she also accidentally posted a topless photo of her.

Despite the drama, the Conways have been supportive of their daughter’s singing ambitions, with George Conway accompanying Claudia at her audition last year.

“We are proud of Claudia for entering the arena and sharing her beautiful voice and inspirational message about mental health with others,” Kellyanne Conway previously told People.