Nearly half a million Australians had been receiving unemployment payments for a year or more when the coronavirus crisis hit and reforms to government-funded employment services are needed to reduce the threat of long-term unemployment.

Analysis by the Australian Council of Social Service and Jobs Australia reveals “disturbing growth” in the share of job seekers who have been out of work for an extended period. 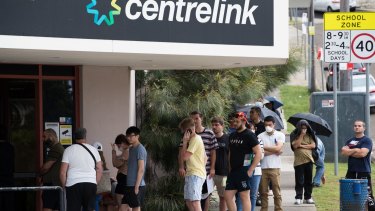 Now almost half (46 per cent) have received unemployment payments for over two years and one in five (20 per cent) for more than five years.

The national unemployment rate was 5.1 per cent in February but Westpac has forecast that to rise to 9 per cent by mid-year even though the Morrison government has recently committed more than $200 billion to support the economy during the coronavirus crisis.

The new “Faces of unemployment” report highlights the risk of long-term unemployment for those who have lost jobs.

It says Australia has been underinvesting in programs that help people find work and that onerous compliance rules for those receiving unemployment payments have been put ahead of practical help to secure employment.

Australia’s overall spending on programs to assist the unemployed as a share of GDP was less than half the OECD average in 2017.

Cassandra Goldie, the chief executive of the Australian Council of Social Service, said even before the coronavirus crisis too many people were locked out of paid work and more “serious investments” in employment services are needed.

“We have a good idea from the evidence available of what works to get people unemployed long-term into jobs: paid work experience in a regular job rather than work for the dole; training in skills in demand from employers rather than standardised 'work preparation' courses, and one-on-one support both for those seeking employment and prospective employers,” she said.

Dr Goldie said it is vital planning starts now to ensure no one is left behind when the economy recovers.

The federal government spends $1.3 billion annually on its jobactive employment services program but the 42 organisations that administer it devote considerable resources to enforcing compliance.

The report calls for the system to "make room" for more intensive assistance for job seekers.

“The evidence shows that people unemployed long-term need much more intensive preparation for jobs, and paid work experience, mentoring and support to encourage employers to give them a chance,” it says.

The government has introduced a six-month "coronavirus supplement" that effectively doubles the rate of unemployment payments. But Dr Goldie says a permanent increase is needed.

The profile of unemployed people has become more disadvantaged over the past decade. The report says 41 per cent receiving unemployment payments had a disability, 11 per cent were sole parents and almost half were aged over 45 years.

“A growing share of people who are unemployed are older,” it says.

Changes to the labour market have also made it difficult for younger job seekers because entry-level jobs “are either harder to get, offer too few paid hours, or are harder to keep.”