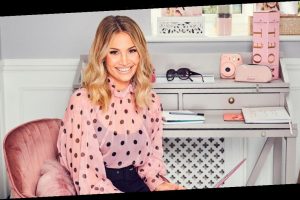 Even though the NHS estimates one in eight pregnancies result in miscarriage, the subject is still a taboo one.

So to help break down this stigma, celebrities have started sharing their own devastating experiences.

In recent months, famous faces like Meghan Markle and Chrissy Teigen have spoken candidly about losing their unborn babies.

Their bravery has been widely praised – especially by women who have gone through similar ordeals.

Anna Saccone Joly, a 33-year-old mum-of-four with 1.3 million followers on Instagram, is among those fighting to de-stigmatise miscarriage.

The vlogger, who lives in Surrey, spoke to the Daily Star about tragically losing her baby at 12 weeks – and why talking about the topic is so important.

My husband, Jonathan, and I have been filming videos for our YouTube channel for twelve years and we’ve been posting daily vlogs for 10.

When we started we were just a couple, boyfriend and girlfriend, and then Jonathan proposed.

Our engagement was caught on camera and posted on YouTube – as well as our wedding and when I got pregnant with our first baby, now eight.

We’ve kept going ever since and through our videos we’ve documented the start of our entire family.

So, when I got pregnant for the third time, Jonathan and I shared the news with our followers who now number 1.81million.

I was 27, naive, and because I had started having my children young – I was just 24 with my eldest – I just didn’t expect anything bad to happen.

Unfortunately, at nine weeks I found out that I was likely miscarrying – they couldn’t find a heartbeat.

I had something called a missed miscarriage, which meant that my body kept believing that it was pregnant and doing its best to protect my baby.

It took until I was 12 weeks for my body to catch up and realise that it wasn’t alive anymore and until then Jonathan and I were in a kind of limbo.

I even had a bump.

During this time, we went to a YouTube convention in Florida and our followers were congratulating us on the baby and some even gave us gifts.

At that point none of our fans knew I was miscarrying, but I knew and it was really awful.

One of my worst fears was how to tell everyone, but when we did it was such a relief that we didn’t have to hide it anymore.

While it was difficult, the best thing that came from such a horrible outcome was that speaking up about my miscarriage helped so many people.

Five years on, we still get messages from people who are going through the same thing and found our video online.

Those same people can see that we went on to have two healthy pregnancies after our loss which is especially encouraging.

And, it turns out that one in eight pregnancies is lost to miscarriage, according to the NHS, while Tommy's (a pregnancy loss charity) estimates that the rate could be as high as one in four.

It's very common and knowing that can be helpful.

There’s no shame in miscarriage, but I know that I felt like my body was broken or something was wrong with me – and that’s not the case.

It’s natural and it’s always been this way.

Meghan Markle opened up about her loss earlier this year and also didn’t say anything for quite a while.

Women in the public eye get a lot of hate – for what they do, wear, or how they look – and it’s a reminder that we don’t know what’s going on behind closed doors and to be kind to each other, always.

After all miscarriage can affect all of us.

The more we talk about it, the more it's normalised which helps women get to grips with their loss.

One piece of advice I would give to anyone who may be going through miscarriage is to reach out to the midwives or nurses at your local hospital if you are worried.

I did that during mine because there are a lot of things which you can read out there which may not be true for you – every miscarriage is different just as every pregnancy is different.

I had always heard it was like a heavy period, but there was so much blood and I felt like I was giving birth.

I was terrified about what I would see, or that I was haemorrhaging, but the nurse I called talked me through everything and assured me that it was normal.

It was lovely to have someone hold my hand through it and to feel supported – this is especially useful if you’re going through your loss alone.

I would also add that miscarriage affects both men and women and so we have to remember to look after our partners too.

After I took a few days to cry and stay in bed I picked myself up and wanted to move forwards, but Jonathan reacted differently.

He got a tattoo in memory of the baby we lost – and he very much felt like we lost a baby – and he still mentions it sometimes.

There’s nothing shameful in his reaction, both are valid, but it’s important to remember to support dads as well.

It was his baby too, his positive pregnancy test and all of the emotions that go alongside that.