A quasar (quasi-star) has been found 20,000 million light years from Earth, making it the most distant object discovered and shattering the theory that the edge of the universe had been seen already. 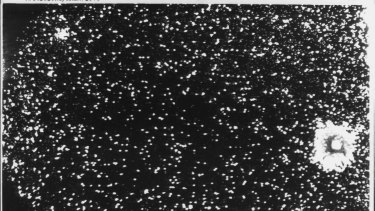 An x-ray view of deep space and a quasar taken by NASA’s High Energy Astronomy Observatory in 1979.Credit:NASA

Australian and British astronomers, using radio and optical telescopes in Australia, discovered the quasar. They calculate the quasar to be the most luminous known object in the universe, pouring out the energy of 100 million million suns.

Such is the distance of the quasar — code-named PKS 2000-330 — that the light picked up by the scientists at the CSIRO's radio telescope at Parkes, New South Wales, last week would have left the star-like object 20,000 million years ago.

Before this, the most distant object known was a quasar 15,500 million light years away, discovered by American scientists nine years ago.

Announcing the discovery yesterday, the Federal Minister for Science and Technology, Mr Thomson, said it opened a new debate on the extent and age of the universe and rekindled the controversy about the nature of quasars.

Quasars are the most distant and luminous bodies known. More than 200 have been discovered, but the source of their intense radiation remains unknown.

They have spectrums — the wavelength of light — with a big "red shift." The red shift is directly proportional to distance. The, farther the shift towards the longest (red) wavelength the farther the object is from Earth.

For 10 years, scientists have been trying to discover an object with a red shift greater than 3.53, the measurement of a quasar found in 1972.

"The lack of success had led to the idea building up strongly that 3.5 represented the edge of the universe. The theory was developed more or less by default, as no one had managed to find a more distant object," says Dr David Jauncey, of the CSIRO division of radiophysics.

The quasar discovered last week has a red shift of 3.78. It was found by Dr Bruce Peterson (of the Mount Stromlo, ACT, and Siding Spring, NSW, observatories), Dr Ann Savage (of the Royal Observatory, Edinburgh) and Dr Jauncey and Dr Alan Wright of the CSIRO.

Dr Jauncey says the controversy referred to by Mr Thomson has been the question of whether the red shift is a true measure of the distance of a quasar. He says he and his colleagues have not merely found one object. "It's a big jump in the red shift, and we now believe we know how to find more of these quasars at this distance, if they exist," he says.

But it would take a radio telescope perhaps as big as Australia, or the world, to determine accurate the size of "PKS 2000-330". Measurements of closer quasars indicated they had "central engines" — the driving force — a few light years across.

An accurate radio position of the newest quasar was determined using the Tidbinbilla radio interferometer near Canberra. The Siding Spring installation near Coonabarabran, in NSW, was used to identify the object.

Finally, another telescope at Siding Spring obtained a spectrum which proved that the quasar was farther away than other known objects within the universe.