How one letter in a text helped catch a killer 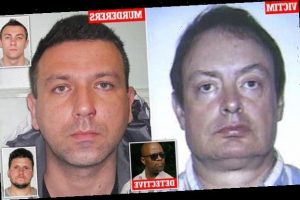 How one letter in a text helped catch a killer: Detectives reveal how message signed with a ‘x’ by a millionaire who was bludgeoned to death led them to his murderers

Detectives have revealed how a single kiss in a text message helped connect a millionaire murder victim to the group of men who had bludgeoned him to death in his home in a violent robbery.

Property tycoon William John Saunderson-Smith, 58, was found in the attic bedroom of his £850,000 home in West Kensington, in 2011, after being killed by a group of Polish builders who had carried out work for him just weeks earlier.

The three builders were jailed for life after being found guilty of murder following a three-week trial at the Old Bailey each receiving a minimum jail sentence of 30 years.

It later emerged Mr Saunderson-Smith had in excess of £925,000 hidden away in his properties he owned across London.

In Crime+Investigation series Murder at My Door With Kym Marsh, which airs tomorrow night, detectives who worked the case explains how a single text message sent from Mr Saunderson-Smith to Rymar helped lead them to the murderers. 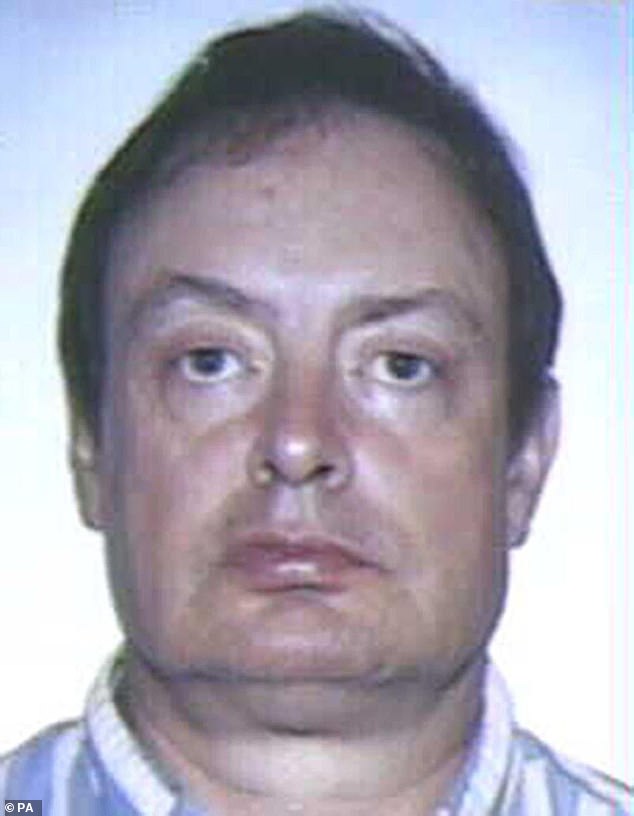 Property tycoon William John Saunderson-Smith, 58, (pictured) was found at his west London home after being bludgeoned to death by a group of Polish builders in 2011

Dawid Rymar, 24, (middle) Slawomir Bugajewski, 39, (left) and Ireneusz Mydlarz, 33, (right) all from Acton, who had carried out renovation work for Saunderson-Smith just weeks earlier, were convicted for his murder and later jailed for life

As part of the investigation, officers had to search through more than 60 mobile phones but found nothing of interest until they reached the final one.

‘There’s one text message on that phone that shows a little bit of emotion,’ DI John Finch explains. ‘It says “how are you doing?” and then a “x”.’

Detective Chief Inspector Howard Groves adds: ‘This was just a text in isolation, two months old, and we thought “is there a relationship between the victim and the person this message had been sent to?” So the alarm bells came up for us in terms of thinking, “does this have some relevance for us in terms of the investigation?”‘

‘It then wasn’t difficult to establish who this particular phone number belonged to.’

Rymar was already known to the police because he had carried out work at Mr Saunderson-Smith’s property weeks prior to the murder.

Mr Saunderson-Smith was a recluse who had little interaction with friends or family, with the last known acquaintance of John having made contact with him two years before his death.

The businessman had a property empire that spanned across the UK, Australia and Spain, but despite his huge property portfolio and wealth, police can found little trace of him on official databases and records.

‘He wouldn’t have anything to do with any financial institutions’, DCI Groves said in an interview with Femail. ‘I think him deciding to keep all of his money at home was going to be his downfall.’ 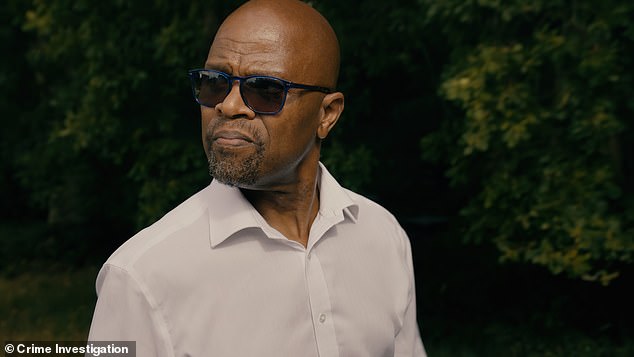 The property tycoon used slight variations of his name and different birth dates on official paperwork, and police were never able to trace the origins of Saunderson-Smith’s fortune.

DCI Groves said: ‘He never kept an awful lot of records, the information we had was a bit sketchy. We weren’t able to build up a significant profile of where he started from and where he ended up.’

Police discovered Saunderson-Smith’s body in October, and were stunned after discovering huge sums of cash stashed away carrier bags scattered across the property.

‘When you find that amount of money you can normally link it to organise crime and things like that’, said DCI Groves. ‘But we knew that was not his game. He just decided to hoard all that money and keep it close to him. 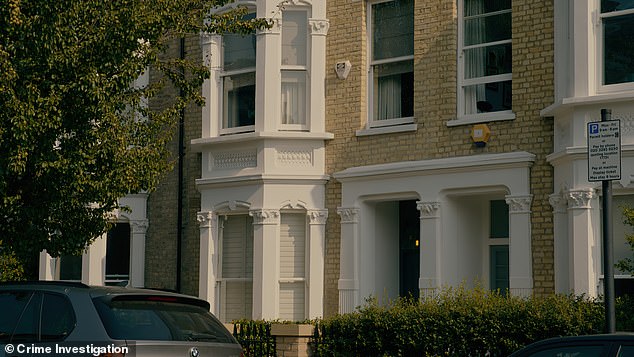 The property tycoon, who had a property empire that spanned across the UK, Australia and Spain, was found in the attic bedroom of his £850,000 home in West Kensington (pictured)

He added: ‘It was untidy, you could imagine there was no order to the premises anywhere. There were cups, carrier bags things he had brought that were left lying around in a room.

‘There was no care taken to tidy, but he was living on his own. His lifestyle could be said to be a little bit chaotic, there was no order.’

The businessman had an assistant to help with his day-to-day tasks, who hinted to police that Saunderson-Smith had on occasions visited gay clubs in the West End, but Groves says his lifestyle never ‘significantly impacted the investigation’.

‘There was nothing to say he was having a relationship with anyone or anything like that’, he said. ‘That did not become something we were going to be obsessed with.

The murder of John Saunderson-Smith

Property tycoon William John Saunderson-Smith, 58, who was known as John, was found in the attic bedroom of a house he was renovating in West Kensington, London, in October 2011.

He was bludgeoned to death by three Polish builders who later fled the country, jurors heard.

Slawomir Bugajewski, 39, and Dawid Rymar, 24, both of Acton, west London, and Ireneusz Mydlarz, 37, of Edgware, north London, who had carried out renovation work for the tycoon just weeks earlier, denied murder.

The court was told the three builders lay in wait until Mr Saunderson-Smith turned off the lights and went to bed, before forcing open a sash window and attacking him.

His body was discovered by a young assistant at one of his properties in Dewhurst Road on October 21.

Following the killing Bugajewski Rymar and Mydlarz fled the country.

One of the defendants later told police they took £2,000 but officers later found they missed £225,000 hidden in and around the bedroom, and a further £100,000 at another property in Fulham.

The three builders were jailed for life following a three-week trial at the Old Bailey each receiving a minimum jail sentence of 30 years.

Det Insp John Finch, of the Homicide and Serious Crime Command, said: ‘As a result of a meticulous investigation we were able to identify and arrest the three builders, who had fled the UK with the £2,000 that they had stolen.

‘As investigators we were going to look into that, but we never saw anything that would raise any suspicions.’

He admitted that police ‘never really got to the bottom’ of the text.

‘You can get some ideas in your head’, he said, ‘Where there may have been a one sided relationship, where maybe Saunderson-Smith smith liked this individual – but we were never able to prove anything in this regard.’

Saunderson-Smith died from a series of savage blows to his head, sometime between the evening of Thursday October 20 and the following afternoon, in what courts later ruled to be a robbery gone wrong.

DCI Groves said: ‘The work they did for him, they were paid cash in hand and we suspect they came across cash on one of the occasions they were working for him and probably felt that if they turned up later on that evening, they would be able to find more cash.

‘Unfortunately for them, they probably didn’t realise the victim was still at the premises, they probably felt they could enter without being disturbed.

‘But we suspect that Sanderson-Smith disturbed them when they were downstairs which is why ultimately he was attacked and killed.’

Following their crime, the three men fled from the UK to Poland via France, and police were able to locate them at Victoria Coach station four hours following the murder.

Rymar and Bugajewski spent the money they had stolen on a trip to Paris, where they posed for photographs in front of the Eiffel Tower.

Mydlarz flew directly back to his homeland – but not before spending some of the money he had stolen on an iPad and designer clothes.

Forensic evidence had been found inside Saunderson-Smith’s home, and blood was also found inside a Land Rover Bugajewski had bought from a friend a few days earlier.

While the trio had scoped out nearby streets in a bid to avoid detection on CCTV, he killers had failed to notice a camera on a West Kensington hotel, which captured their movements on the night of the murder.

Confident that they had found the killers, police set about getting an extradition warrant, but decided to try and contact the killers directly to circumvent the long drawn out process of obtaining a European arrest warrant

‘[We said] ‘The best thing you can do is come and face the music’, in layman’s terms’, said Groves.

‘We’d done it before, we’d started the process of getting a search warrant, but we thought at the same time, in our back pockets, we would encourage them to come back’.

Rymar was so confident he had cheated justice that he agreed to fly back from Poland for questioning by police without an extradition warrant.

DCI Groves said: ‘If you think you’re going to be convicted of murder and you’re in another country, you’re more than likely to stay there, you’re not going to come back.

The trio all made no comment in their interviews before all denying murder at trial. However they were all convicted to life imprisonment with a minimum of 30 years before parole following a three-week trial at the Old Bailey.

DCI Groves says that he doesn’t remember the trio showing any remorse about their crimes, and says that police are still unsure about why the brutal attack was so violent.

‘We had to speculate to a degree’, he said, ‘And say that they went there with the intention of finding more money, they were more than likely disturbed hence the reason why they were not able to find any money.

Murder At My Door With Kym Marsh, airs on Mondays at 9pm on Crime +Investigation.

a, helpe, How, in, letter, One, text
World News