In trolls and tech giants, Morrison finds an ideal enemy

Dr Webster, her husband and a not-for-profit they founded are owed the money for a campaign of delusional videos falsely branding her a paedophile but the Mildura-based MP knows she’s probably not going to get it.

She’s grown tired of battling through the courts to try to compel the woman to pay out the judgment for her defamatory videos, which has been complicated by the fact she is overseas. 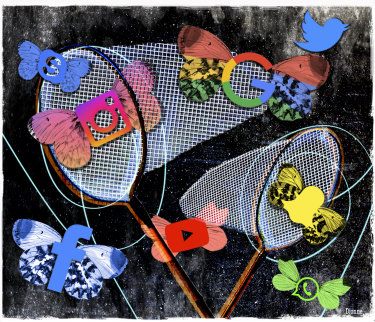 “It’s not it’s not feasible. It’s not reasonable. It’s exhausting. We’ve all got jobs to do and that’s where my focus is, strangely enough, during COVID. There hasn’t been a lot of time to actually pursue anything more about that. And I’m not prepared to spend any more money frankly.”

And though the government’s new social media defamation laws will do nothing to help Dr Webster personally, she is thrilled they go some way towards her broader objective: taking on technology companies that many MPs view as accepting scant responsibility for lies and hate proliferating on their platforms.

Deputy Prime Minister Barnaby Joyce, Liberal Senators Sarah Henderson and Jim Molan and Dr Webster are just some of the Coalition party room who have had personal or close family exposure to the ills of the internet.

Defence Minister Peter Dutton won a defamation claim against Twitter user Shane Bazzi, who called him a “rape apologist” in a remark the court found was offensive, hurtful and unprotected by any legal defence.

Now the government has acted with a proposed new law: the Social Media (Anti-Trolling) Bill 2021. It has also established a new parliamentary inquiry into the toxicity of social media, which will begin public hearings later this month and report by February 20, keeping the blowtorch on the issue of big tech’s power over the summer months.

In a chest-thumping announcement this week, Prime Minister Scott Morrison made clear the proposed laws will form the ballast of Coalition’s tough-on-big tech campaign platform ahead of next year’s federal election. He pitched the laws as “ripping the masks off” trolls who are “preying upon our kids and our family members”, and characterised the social media giants harbouring those trolls as a threat to Australians. His resolve in taking them on was a demonstration of “the strength that is required to lead this country.” 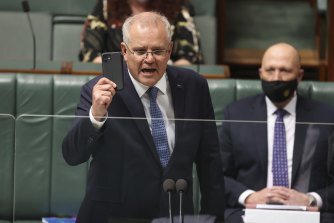 Prime Minister Scott Morrison is taking on the companies that live on the phones of millions of Australians, making cleaning up the internet a plank of his re-election pitch.Credit:Alex Ellinghausen

The reality is the laws are less about trolling, which refers to an expansive range of ill-defined bad faith online abuse and insults, and more fundamentally about defamation – a legal concept involving damage to someone’s reputation. Specifically, the laws propose giving people an easier pathway to sue someone for defamatory comments they have made online using an anonymous account.

Sceptics such as legal academic Michael Douglas view it as doing little more than benefiting powerful people such as Mr Dutton who have the time and inclination to pursue defamation cases, which can handily cost more than $1 million in fees, along with social media companies.

That is because the law makes it easier to identify anonymous social media users and shields companies like Facebook and Twitter for posts on their sites if they follow a complaints process that can include turning over contact information or pulling down purportedly defamatory comments.

Those complaints processes are at the heart of the law. As set out in the bill, anyone can make a “defamation complaint” to the social media company about another user’s comment on that platform, providing the comment was made in Australia.

The company must then tell the poster about the complaint and, with the user’s consent, the post can be deleted. If things continue, the company can give the complainant the poster’s details but it needs agreement to do so. As long as those steps are followed, the platform is safe from any legal claim. Finally, if the complainant is still unsatisfied because the poster refused to release their details, they can bring an actual legal claim to court and seek an order for the identity of the person who posted something allegedly defamatory about them.

There is a hunger in the community for change to the “coward’s palace” of social media, as Mr Morrison called it in October when he first foreshadowed these laws.

That could create a quick new system that encourages social media platforms to quickly pull down cruel posts without the cost of a court case or constrict free speech and robust debate. It could also make it easier to unmask people whose jobs, personal experience or identity make it hard for them to participate in the first place.

Professor Derek Wilding, co-director of the Centre for Media Transition at the University of Technology Sydney, is enthusiastic about the prospect of forcing the digital platforms to set up a more robust complaints’ mechanism but says it needs to be broadened beyond the narrow scope of defamatory material.

“If the government is prepared to work through some of the complications, and try to achieve an outcome that has real benefits beyond just the narrow benefits of solving some issues relating to defamation, then that would be a really beneficial outcome for quite a number of people,” he says.

One issue is that the laws could be used to unmask people whose comments may be unsavoury or insulting but ultimately found not defamatory by a court, raising questions about the right to anonymity online.

“It can be very uncertain as to when something is defamatory or not defamatory… but after a long case, there might be a defence that applies. It seems to me that the test for getting into the system – that you think you might have a defamation claim – that’s not a very high bar to pass,” he says.

Public consultation on the exposure draft of the bill will close at the end of January, but with a date yet to be set for the federal election it is unclear when – or if – a final version of the laws will be put before the Parliament. Labor says it broadly supports efforts to stamp out trolling and make social media giants more accountable but is yet to weigh in on the specifics of the proposed laws.

Greens communications spokeswoman Sarah Hanson-Young, who is no stranger to defamation claims herself, questioned the timing of the announcement as “smoke and mirrors” designed to distract from a disastrous final setting week for the government.

“It is unclear whether what Mr Morrison is proposing will actually do anything to protect people online from trolling and abuse,” she says.

The Institute of Public Affairs, a free market think tank that has strong links into the Liberal Party and believes defamation law should be abolished in all but the most egregious cases, argues the proposal will give Facebook and other platforms a licence to censor conservative and contrarian voices that might appear legally risky.

“The supposed unmasking of anonymous trolls won’t solve anything while defamation law remains so clunky and inequitable. It won’t be mums and dads in marginal seats using this law, but the rich and powerful, including the political class,” IPA communications director Evan Mulholland says.

But whatever the merits of the policy, there is a hunger in the community for change to the “coward’s palace” of social media, as Mr Morrison called it in October when he first foreshadowed these laws. 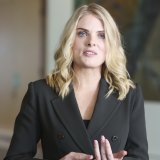 Where journalist and presenter Erin Molan was once stopped in the street by people wanting to talk about sport, now the overwhelming majority want to tell their stories of the ills of social media trolling.Credit:Alex Ellinghausen

Sport journalist and radio host Erin Molan (who also works for Nine, the owner of this masthead) says that where once people stopped her in the street to talk about football, now the overwhelming majority want to talk about her campaign to change social media.

Like Webster, Molan did not choose to become an advocate in the space: instead, she was trolled and harassed so viciously, including through threats to her unborn child, that she eventually went public. She did not campaign specifically for these defamation laws but led a charge for similar anti-trolling laws called the Online Safety Act that came with huge fines and were announced late last year.

“Now, without, without exaggeration, I reckon 90 percent of people that approach me — old people, young people, men, women, people from all different professional backgrounds — speak about now is the social media work that I have done,” says Molan, whose father happens to be Liberal senator Jim Molan.

“I’m going on Good Morning Britain again on Monday. I’ve done them twice already. Because we’re leading the world in this you know, they are getting me on to talk about what Australia is doing in this space because it is world first.”

While Molan acknowledges that the boundary between political debate or free speech on the one hand and abusive sledges can be porous in some cases, in other she sees it as very clear.

For example, Molan remembers a teacher who told her how he spends hours each morning counselling year two students to undo the hurt they have inflicted on them online each evening. Once a handful of people have faced big court cases and been revealed for that kind of behaviour, Molan predicts the internet will become a better place.

“Anonymity is their greatest weapon in all of this. You know, these are cowards,” she says.

Molan is fighting her own defamation court battle with the Daily Mail, after it published an article she says painted her as a racist. The court has yet to make a decision.

Whether or not seven-year-olds or their parents are very really likely to sue for defamation is not the political point: the image of the traumatised child stands in marked contrast to the social media giant’s argument, which has so far been, essentially, silence.

Their lobby groups have not taken a stance either, though multiple industry players have made substantial strides in recent years to make their platforms safer and home to less harmful content.

Dr Webster is hopeful that the social media giants, chastised by their experience with the news bargaining code that they lashed before accepting earlier this year, will not fight the new laws.

But for her, it is only one step because it still leaves the individual needing to take legal action. “I think they realise they need to be in the tent rather than out of the tent,” she says.