"I fear this free speech bid is going to help this hell platform reach its final form of totally lawless hate, bigotry, and misogyny."

Elon Musk acquired Twitter for $44 billion and at least one high profile celeb on the social media app is quitting.

Jameela Jamil said goodbye to the microblogging platform just hours after the deal went down on Monday.

Posting a series of snaps with her pup Barold, “The Good Place” actress tweeted her final tweet: “Ah he got twitter. I would like this to be my what lies here as my last tweet. Just really *any* excuse to show pics of Barold. I fear this free speech bid is going to help this hell platform reach its final form of totally lawless hate, bigotry, and misogyny. Best of luck.”

Earlier that day she warned followers: “One good thing about Elon buying twitter is that I will *FINALLY* leave and stop being a complete menace to society on here. So it’s win win for you all really.”

Musk bought the largest stake in the publicly-traded company after briefly flirting with the idea of joining the board. He’s vowing to make it a private company going forward.

“Free speech is the bedrock of a functioning democracy, and Twitter is the digital town square where matters vital to the future of humanity are debated,” Musk said in a statement after the purchase was approved by shareholders and finalized.

The sale certainly had Hollywood talking. See what other celebs had to tweet in the link below: 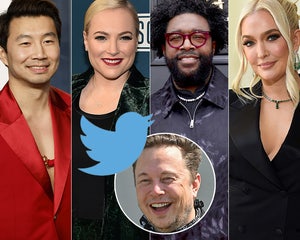