The grandson of Grace Kelly and his wife Marie revealed they are expecting a baby next year in sweet social media post.

Louis, who is the nephew of Prince Albert of Monaco, and Marie Ducruet, both 29, tied the knot in Monaco in 2019, took to Instagram on Thursday to share the exciting news.

The couple shared an adorable snap posing with their dog Pancake – wearing a T-shirt, which reads ‘soon to be big brother.’ 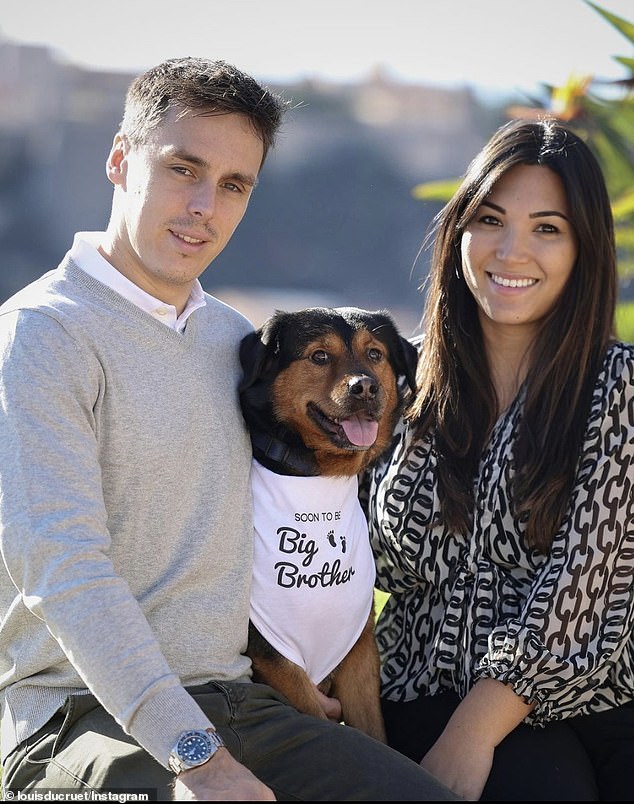 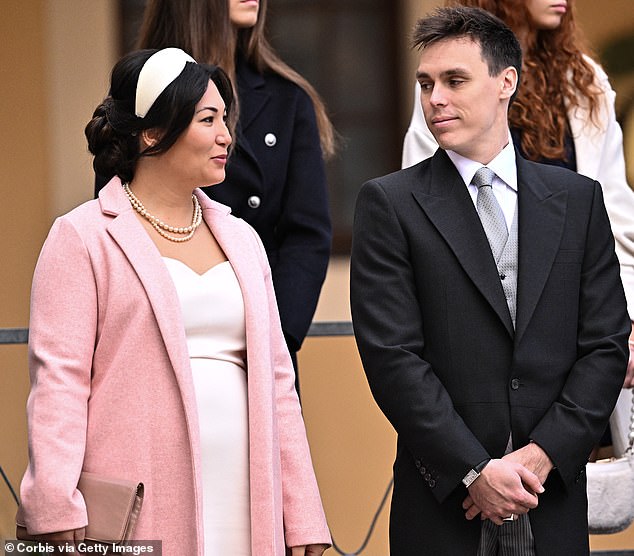 The snap, which shows the pair beaming, was captioned: ‘An adventure is about to begin’ with a black heart emoji.

Marie looked radiant in a black and white patterned blouse, which she paired with black trousers.

Her brunette locks were styled in a straight centre parting and her neutral makeup enhanced her flawless complexion.

Louis looked smart in a grey jumper which he paired over a white shirt and completed the look with dark grey chinos.

The snap, which shows the pair beaming, was captioned: ‘An adventure is about to begin’ with a black heart emoji

Friends and family rushed to comments section to congratulate the happy couple.

The exciting news comes after the pair opened up about their plans to have a family in April.

They admitted they are now thinking about the next stage of their marriage, after celebrating their relationship’s ten-year anniversary in March.

Speaking to the French magazine Point de Vue, the couple admitted they both wanted a child, but while Louis wanted to dive right in, events executive Marie wanted to wait in order to focus on her career. 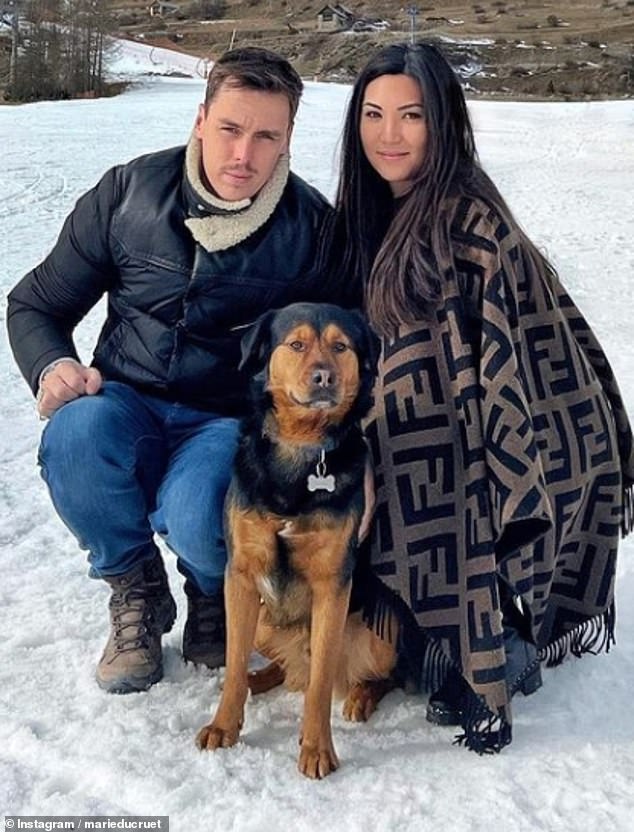 Marie said she would like to stop after two kids, while Louis, who works as an advisor for international projects at Nottingham Forest football club, would like to go up to four

The couple admitted the women in their respective families, including his mother, Princess Stephanie of Monaco and his sisters, Pauline Ducruet and Camille Gottlieb often ask them when they will have a baby.

Marie said she would like to stop after two kids, while Louis, who works as an advisor for international projects at Nottingham Forest football club, would like to go up to four.

‘It’s true that Louis has been telling me about his desire to be a dad for several years,’ Marie said.

‘I’m not totally ready yet. I would like to wait a bit longer, but maybe next year?’ she said.

’30 would be a beautiful age to make this project come true,’ her husband added.

And the couple have admitted they also have different views when it comes to the number of children they would like. 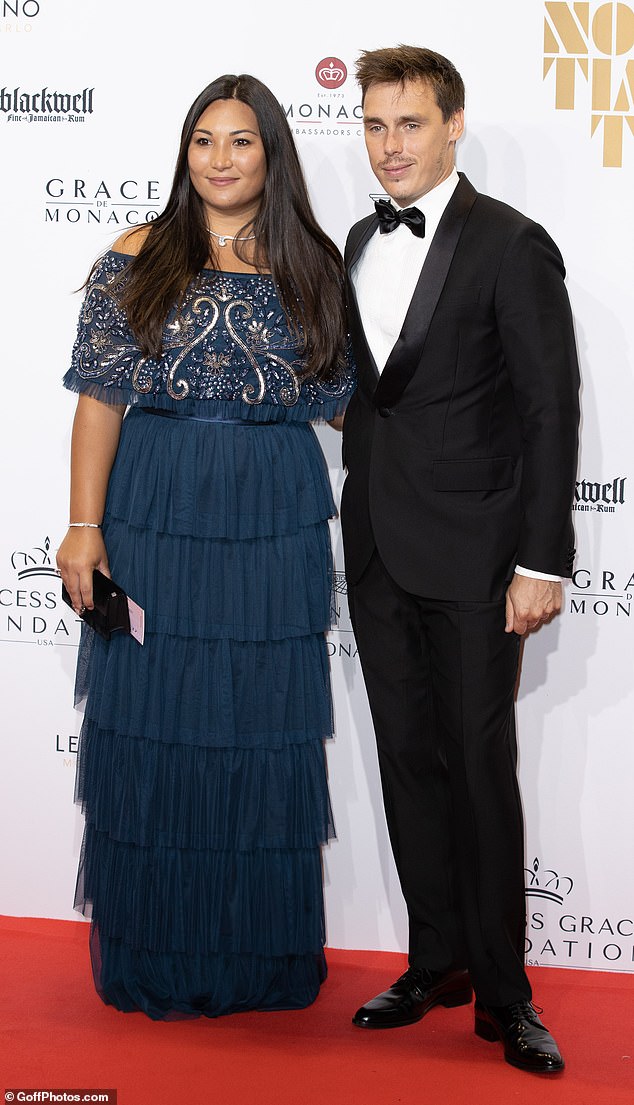 The couple, pictured at the ‘No Time to Die’ movie premiere in Monte-Carlo in September, marked their ten year anniversary in early March

‘Ideally, I’d like to have three to four children. I have one brother and three sisters,’ Louis said. ‘Having a big family just like mine would be true bliss.’

However his wife said she’d rather stop at two children.

The couple started dating as students when they were both attending Skema Business School in Sophia Antipolis, France, in 2011.

Love-struck Louis popped the question to Marie in 2018, during a romantic beach proposal.

Louis, who is grandson of Rainier III, Prince of Monaco, and American actress Grace Kelly shared their engagement on Instagram, with a picture of the happy couple on a beach, with him on bended knee and said: ‘Let me introduce you the future madame Ducruet. She said yes and we are now engaged.

The couple tied the knot during a civil ceremony at Monaco’s town hall, attended by Pancake in a dog-xedo, before a religious ceremony the next day

They tied the knot in a civil ceremony at Monaco’s townhall, with the bride in a simple ivory jumpsuit and her hair swept back in a pretty clip.

The couple were married by Monaco’s mayor George Marsan and they then had an informal garden reception in the Prince’s Palace.

The couple went on to have a more lavish affair on Saturday – marrying at Monaco’s Cathedral with an emotional religious ceremony at Monaco’s cathedral, where Marie was seen dabbing her eyes, overcome with happiness as she pulled up in a white Rolls Royce.

The bride’s dress for the religious ceremony was created by Atelier Boisanger.

The dress was made of Zagar and Chantilly Lace, while according to their designers the dress also took 300 hours of delicate embroideries. 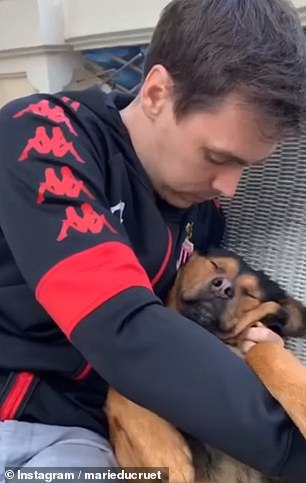 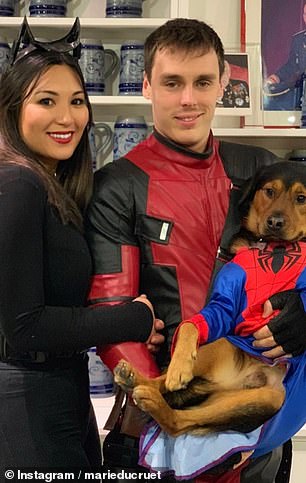 The couple both included their beloved dog Pancake, pictured, whom they’ve shared for years, in their anniversary messages