Murray Polner, Antiwar Editor and Author, Is Dead at 91

Murray Polner, an unswerving voice for pacifism and civil liberties and the founder and only editor of Present Tense magazine, a progressive counterpoint to Commentary that began in a period of one-upmanship among Jewish intellectuals, died on May 30 in Manhasset, N.Y. He was 91.

The cause was sepsis, his son Robert said.

Present Tense, which started as a quarterly in 1973 and was later published bimonthly, was a liberal Jewish journalistic take on world affairs.

Like Commentary, which was considered somewhat more highbrow and later branded as neoconservative, Present Tense was published by the American Jewish Committee, which blamed financial constraints when Present Tense was closed in 1990.

Some members of the Present Tense staff said at the time, however, that the decision was politically motivated because the magazine had been critical of Israeli policies and, earlier, of the Reagan administration.

A member of the Naval Reserve and an Army veteran who served in Japan during the Korean War, Mr. Polner evolved into a pacifist. He opposed military conscription and evinced empathy for the former soldiers he interviewed for his book “No Victory Parades: The Return of the Vietnam Veteran” (1971).

The book consisted of profiles of nine white troops categorized in three sections: “The Hawks,” “The Doves” and “The Haunted.” It concluded, “Never before in American history have as many loyal and brave young men been as shabbily treated by the government that sent them to war; never before have so many of them questioned as much, as these veterans have, the essential rightness of what they were forced to do.”

In 1973, after President Richard M. Nixon signed the Paris Peace Accords ending the war, David S. Broder wrote about Mr. Polner’s book in The Washington Post. “I spent the weekend reading a disturbing book about the Vietnam veterans,” he wrote, “and I do not commend it to you, if you want to preserve the present mood of euphoria.”

What was so disturbing, Mr. Broder said, was that Mr. Polner focused on “something we all know, but prefer not to think about”: that Vietnam was “the least democratic war of our century,” that “there was no equality of sacrifice,” and that “those who fought were, as Polner says rather cruelly, ‘our new expendables.’ ” 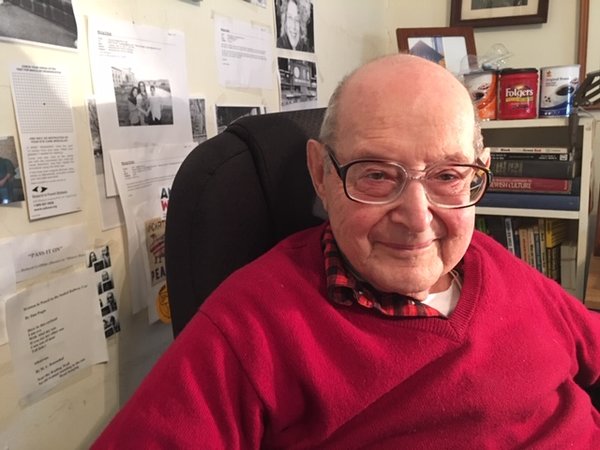 Among Mr. Polner’s other books was “When Can I Come Home?” (1972), about amnesty for draft evaders. He was also an editor of Shalom, a publication of the Jewish Peace Fellowship that was founded in 1941 to support conscientious objectors.

Murray Polner was born on May 15, 1928, in Brooklyn to Jewish immigrants who had fled Russia after the Bolshevik Revolution. His father, Alex, sold Fuller brushes door to door. His mother, Rebekah (Meyerson) Polner, was a homemaker.

Raised in the Brownsville neighborhood, Murray graduated from Samuel J. Tilden High School. His political outlook was shaped, he said, in part by the firing of teachers because of their political views, and in part by his bewilderment one day in the late 1940s when he, a friend and one elderly woman were the only passers-by willing to sign a petition supporting the Bill of Rights.

“Yes,” he acknowledged in 2017 to Uncommon Thought Journal, “there certainly were plenty of Russian spies, as there were no doubt plenty of American spooks too.” But, he added, “at most, many of the Communists and leftists were guilty of moral complicity for ignoring Stalin’s crimes. Or daring to belong to New Dealish left and labor groups. Or signing petitions.”

He taught at Thomas Jefferson High School in Brooklyn and was an adjunct professor at Suffolk Community College, Brooklyn College and Queens College.

As the executive assistant to the first New York City schools chancellor, Harvey B. Scribner, in the early 1970s and an assistant to Seymour P. Lachman, a member and later president of the Board of Education, Mr. Polner conceived of a program to help hospitalized and disabled veterans earn high school diplomas, initiated night schools for teenagers who worked during the day, and instituted a student Bill of Rights.

In addition to his son Robert, he is survived by his wife, Beth (Greenwald) Polner; another son, Alex; a daughter, Beth Polner Abrahams; six grandchildren; and one great-grandson. He lived in Great Neck, N.Y.

In the early 1990s, Mr. Polner was editor of Fellowship magazine, which was published by the Fellowship of Reconciliation, and until recently he was book review editor of the History News Network. Among his other books were “Disarmed and Dangerous: The Radical Lives and Times of Daniel and Philip Berrigan” (1997, with Jim O’Grady) and “Branch Rickey: A Biography” (1982).