Home » Lifestyle » Princess Eugenie takes on the £5 for 5k challenge

Princess Eugenie takes on the £5 for 5k challenge

Princess Eugenie has taken on the £5 for 5k Run For Heroes challenge to raise funds for NHS workers.

The Queen’s granddaughter, 30, who is believed to be isolating with her husband Jack Brooksbank in Windsor, took to her Instagram stories to share a selfie as she enjoyed an evening run last night.

It is believed the royal participated in the challenge days after being nominated by her popstar friend Ellie, 33, who asked loved-ones to take part in the initiative without revealing their identity on Monday.

The @RunForHeroes social media campaign encourages people to use their daily outdoor exercise allowance to run, walk or cycle 5km whilst maintaining a safe distance from others before donating £5 to the NHS. 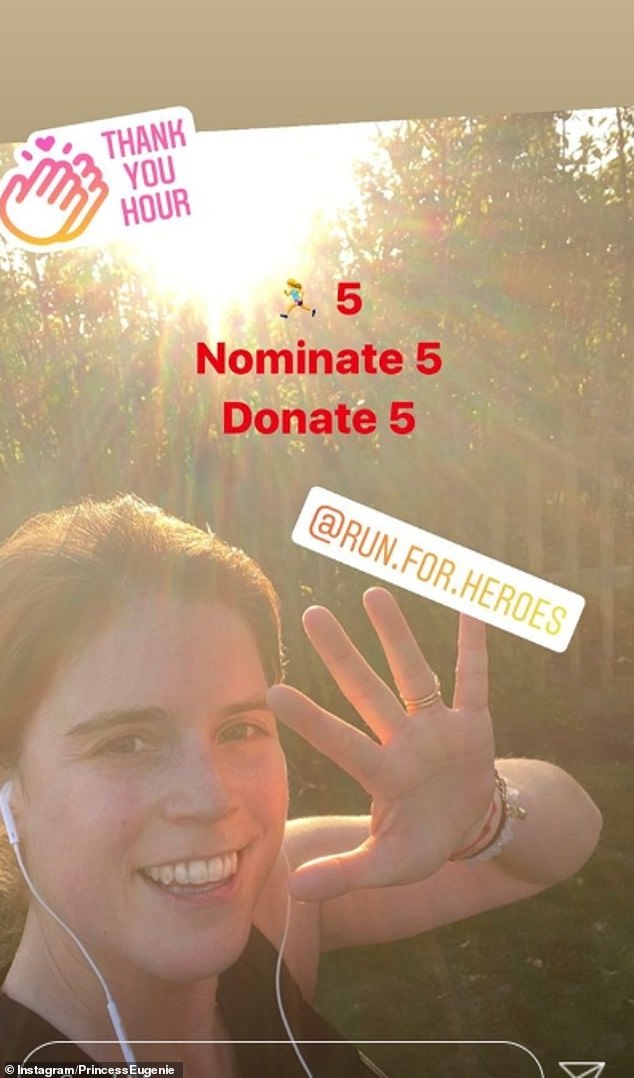 Princess Eugenie, 30, shared a snap as she took an evening run last night for the Run for Heroes initiative

All participants are asked to donate £5 via the Run For Heroes giving page and then spread the message even further by sharing a picture of themselves exercising on Instagram, tagging @Run.For.Heroes and nominating five of their friends to also take part and donate.

Princess Eugenie shared her selfie last night as she jogged through the evening light.

The royal is believed to be self-isolating with her husband Jack Brooksbank and parents Sarah Fergie Ferguson and Prince Andrew at the Royal Lodge in Windsor.

Her post comes days after Ellie Goulding shared her take on the challenge, with the  popstar revealing she had ‘nominated five friends’ without revealing who they were. 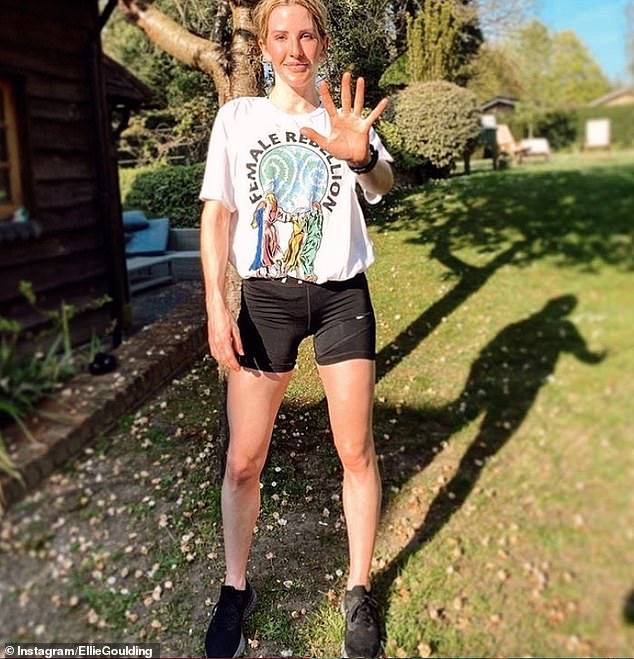 The royal’s post comes days after her close friend popstar Ellie Goulding, 33, nominated five friends to take part in the challenge, without revealing their identity online

Olivia Strong, 27, from Edinburgh, came up with the simple plan to encourage people to to run, walk or cycle 5km (3.1 miles), donate £5 to the NHS then nominate five others on social media to do the same.

Within four days, the campaign raised her initial target £5,000, attracting a mass of celebrity fans including Ellie Goulding, Lynsey Sharp and John Terry.

The campaign is also being developed to showcase at-home workout options for those preferring to exercise indoors.

All proceeds would be donated to NHS Charities Together – a national appeal which aims to protect the welfare of NHS staff and equip them to fight the virus. 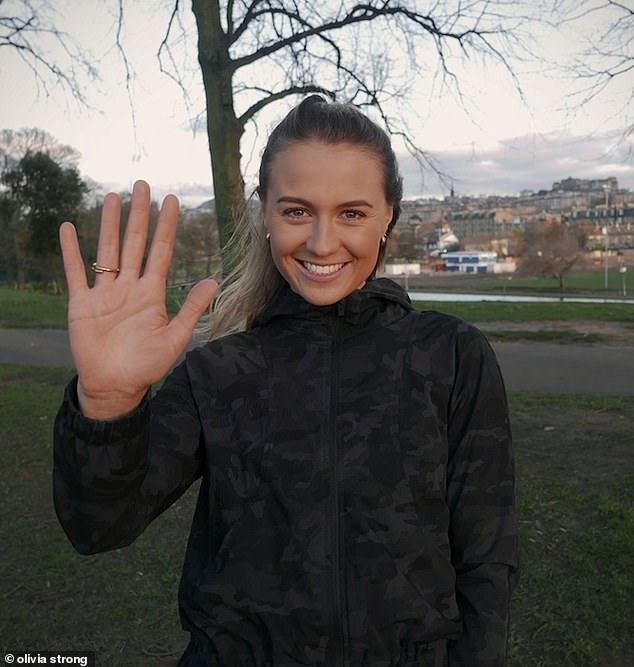 The challenge was started by Olivia Strong, 27, from Edinburgh, who came up with the idea to help NHS workers

Meanwhile yesterday the campaign reached the £2 million milestone, with a further £700,000 raised in just 24 hours.

Princess Eugenie has been using her lockdown time productively, by sharing a whole host of charities and good news stories on her social media page.

Earlier this week, she shared adorable messages of love and support bin collectors in Bradford have collected amid the pandemic – before thanking businesses donating food to the NHS. 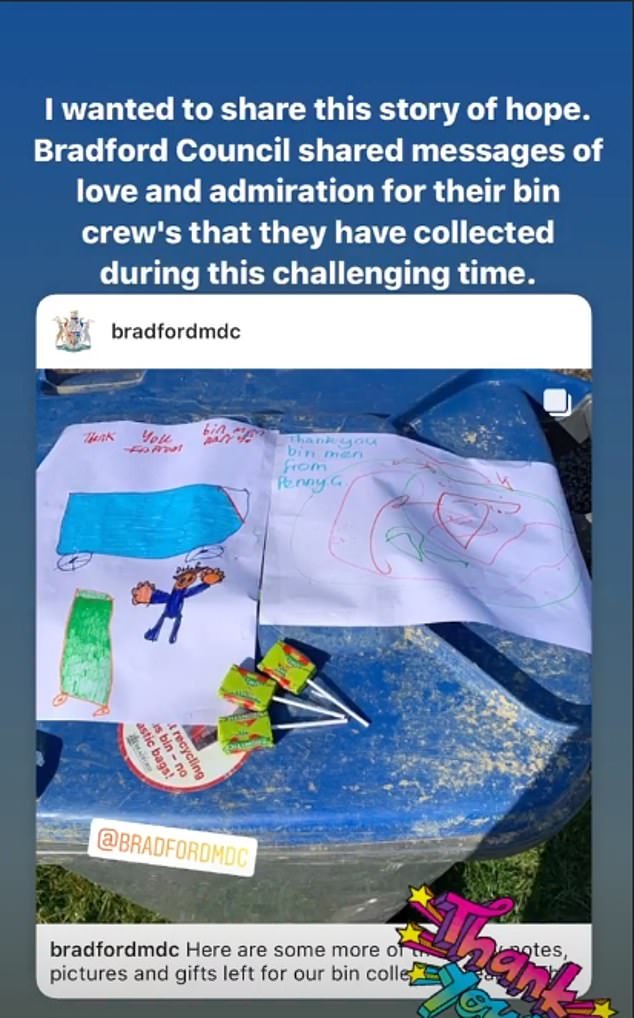 Alongside the snap, the caption read: ‘Our crews are loving the pictures being drawn for them – thanks for the lollies too Harry and Penny.’

Princess Eugenie shared the post on her social media page and wrote: ‘I wanted to share this story of hope. Bradford Council shared messages of love and admiration for their bin crews that have collected during this challenging time.’

In one post, the royal tagged a local company which featured staff smiling alongside boxes of food packages and wrote: ‘Thank you the @the_clucking_pig for donating and delivering scotch eggs to frontline workers at James Cook University Hospital in Middlesborough.’ 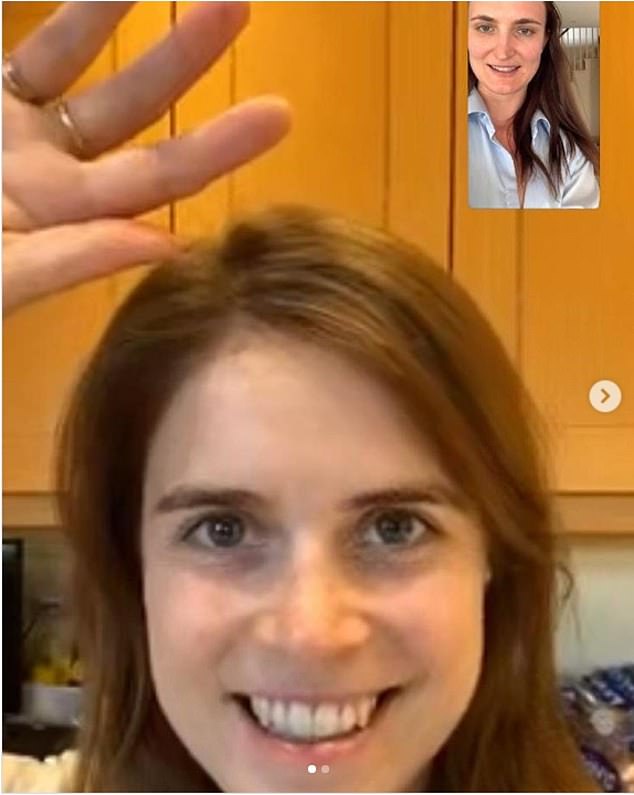 It comes after Princess Eugenie shared a rare make-up free photograph as she works from home amid the coronavirus pandemic.

They show Eugenie chatting with her friend Julia de Boinville, who co-founded the charity with her in 2017 to help raise awareness about modern slavery and support its victims.