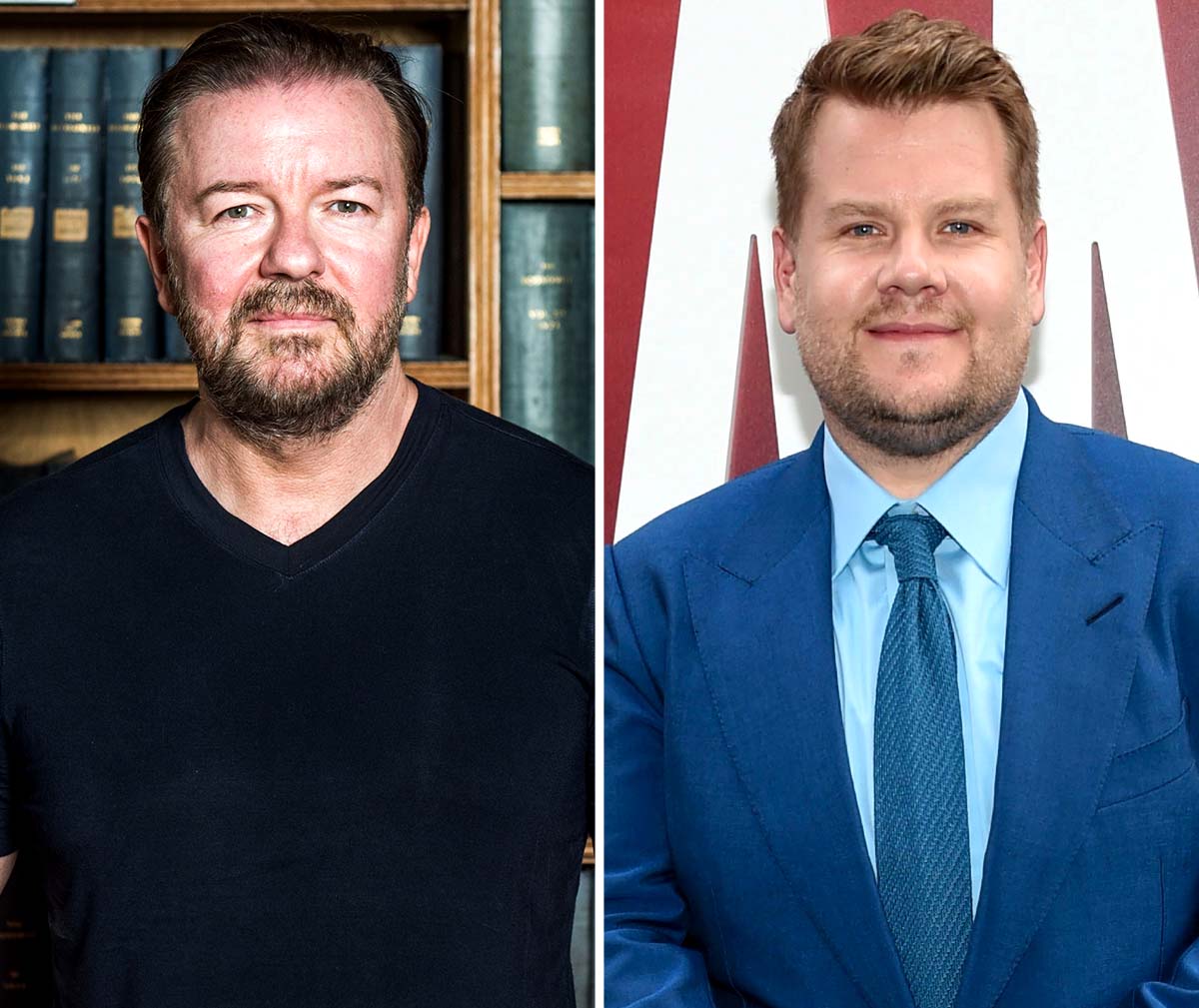 Comedian controversy! Ricky Gervais is weighing in after James Corden seemingly copied one of his bits during a recent episode of The Late Late Show With James Corden.

“The bit about the town square advert for guitar lessons is brilliant 😂,” Gervais, 61, wrote via Twitter on Wednesday, November 1, alongside a clip of the joke in question. In the video, Corden, 44, poked fun at Elon Musk’s Twitter takeover in a manner that fans quickly noticed was very similar to a segment from Gervais’ 2018 comedy special, Humanity.

“When you see Elon Musk talk about Twitter, he does this thing where he goes, ‘Well, it’s the town square,’” the Carpool Karaoke host said in his opening monologue on the Monday, October 31, episode of his late night show. “But it isn’t. Because if someone puts up a poster in a town square that says, ‘Guitar lessons available,’ you don’t get people in the town going, ‘I don’t want to play the guitar! I want to play the piano, you piece of s—t!’”

In Humanity, Gervais made a nearly identical observation about the social media platform. “It’s like going into a town square and there’s a notice for guitar lessons and you go, ‘But I don’t f—ing want guitar lessons!’” the Office alum quipped.

The stand-up comedian later deleted his tweet acknowledging the similarity of the two jokes. When a fan asked him why he removed the post, Gervais replied, “Started to feel sorry for him 😂.”

The For Your Consideration actor also replied to another Twitter user who asked whether Corden had asked permission to use the joke. “No. I reckon one of the writers ‘came up with it’ for him. I doubt he would knowingly just copy such a famous stand-up routine word for word like that,” the Extras alum wrote.

The Biggest Controversies and Feuds in Talk Show History

Corden addressed the incident hours later, crediting Gervais and insisting that the alleged plagiarism wasn’t intentional on his part.

“Inadvertently told a brilliant Ricky Gervais joke on the show last night, obviously not knowing it came from him. It’s brilliant because it’s a Ricky Gervais joke. You can watch all Ricky’s excellent specials on Netflix,” he wrote via the official Late Late Show Twitter account.

The Prom actor made headlines last month after restaurateur Keith McNally banned him from his dining establishments for the second time.

“James Corden is a hugely gifted comedian, but a tiny cretin of a man. And the most abusive customer to my Balthazar servers since the restaurant opened 25 years ago,” McNally, 71, claimed via Instagram in October.

Corden addressed the entrepreneur’s allegations during a subsequent episode of his show.

“Whenever these sorts of moments come my way, I like to adopt quite a British attitude — sort of keep calm and carry on. Things are going to get written about me, never complain, never explain. It’s very much my motto,” he said.

The Emmy winner also talked to The New York Times about his feud with the Balthazar owner. “I haven’t done anything wrong, on any level. I feel so Zen about the whole thing. Because I think it’s so silly. I just think it’s beneath all of us. It’s beneath you. It’s certainly beneath your publication,” he told the outlet.