Home » Lifestyle » She’s Ms ABC, so why has it taken so long for Zan Rowe to host her own TV show?

She’s Ms ABC, so why has it taken so long for Zan Rowe to host her own TV show?

You can learn a lot about people from the music they love. That’s the remarkably simple concept behind Take 5, Zan Rowe’s radio segment turned award-winning podcast, which is finally making the leap to TV after 14 years.

Why has it taken so long? 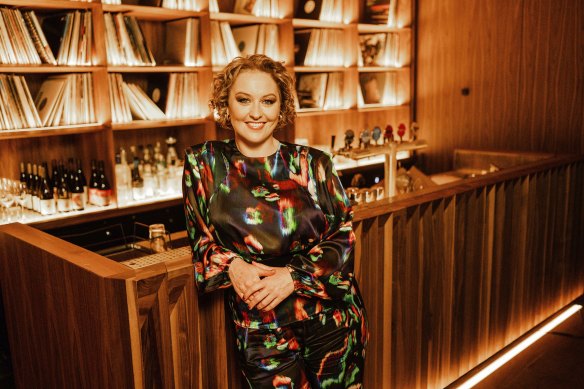 “Good question!” says Rowe, laughing. “Music on television is something that I’ve been pushing for many years. There’s sometimes an argument or an idea that music on TV is difficult; I would say it just needs to be done well.

“This is a music show, but it’s also a conversation, it’s connection, it’s humanity. It’s all of those things and that’s what life is, isn’t it? Music doesn’t need to be a genre that you have to understand, or be a nerd about, to connect with.”

The show follows the same format as the podcast: a guest chooses five songs tied to a theme, such as identity or growing up, and they sit with Rowe and chat about life, the universe and everything.

“One of the things that’s come back to me time and time again, through doing these interviews over the years, is that people often go to places they haven’t thought about for a long time,” says Rowe. “And they really think about, ‘what does this music say about me?’”

Across the five episodes, guests Guy Pearce, Keith Urban, Missy Higgins, Tony Armstrong and Tori Amos choose an eclectic mix of tracks, everything from the Beatles’ I Want You So (She’s So Heavy) to Cold Chisel’s Standing on the Outside.

Of the five guests, Urban is perhaps most surprising, particularly if you only think about him as a celebrity — Mr Nicole Kidman — and not as an incredibly accomplished award-winning musician.

“He’s a superstar,” says Rowe, who interviewed Urban at the iconic Third Man Records studio in Nashville. “I’d been told he was quite down to earth and really wanted to open up and share his musical DNA. And he also went to places I didn’t think he’d go either, in terms of talking about addiction.

“It’s really quite grounding to hear someone who’s got such a huge profile and such a magical life talk about how they’re just not comfortable in their own skin.”

Higgins spoke for the first time about the breakdown of her marriage, while Pearce talked about the death of his father. It’s one thing to hear these stories on the radio but another entirely to see people as they relate those stories and how music affects them. 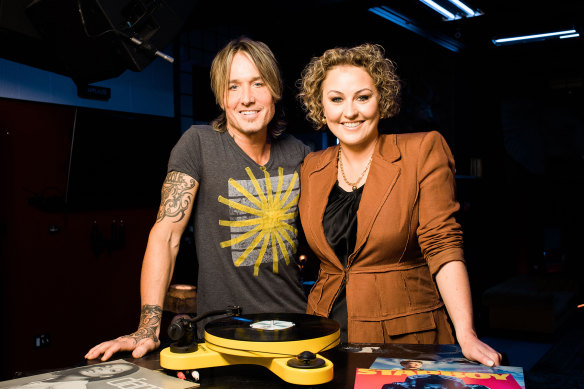 “I’ve seen people’s faces, and seeing how they react when they hear the songs and when they talk about the song, something shifts,” says Rowe. “And I don’t think most of the guests realise how vulnerable they’re going to feel. And how much hearing [those songs] and talking about them will open up something deep in the recesses of their memory that they hadn’t thought about for a long time.”

And, out of curiosity, is it compulsory that every show these days includes ABC News Breakfast’s sports presenter Tony Armstrong?

“I actually did Take Five with Tony for radio a couple of years ago. I did it because I thought this is a guy that everyone loves, but they don’t really know his story. And I knew he was a big music fan. 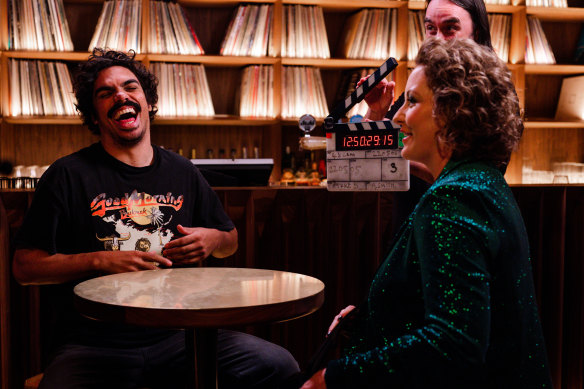 Rowe with Tony Armstrong, whom she’d already interviewed for the radio version of Take 5.

Rowe has been a music mainstay in Australia for the past 20 or so years, starting out on community radio in Melbourne before landing at Triple J in 2005. In 2018, she moved across to Double J, and in the past few years, she has also become a familiar face on ABC TV. Once a week, she pops up on News Breakfast to talk music and has co-hosted the station’s New Year’s Eve broadcast since 2017. This year she also put her talents towards hosting the ABC’s 90th birthday celebrations, alongside Armstrong and the ABC’s other Mr Everywhere, Craig Reucassel.

It does sound like Rowe’s dangerously close to becoming an ABC institution. She’s even been on Gardening Australia. “I don’t want to punish people,” she says, laughing. “I don’t want to be inescapable in some ways.”

That said, it is surprising it has taken this long for Rowe to land her own show. On Take 5, her skill as an empathetic interviewer comes through. She is a safe pair of hands — no gimmicks, no gotchas — and it’s why she has become one of Australia’s top music journalists. Not that she’ll admit it, but she is a classic quiet achiever.

“I think often it’s a case that people know me as a DJ,” she says. “And I’ve been doing bits and pieces over many, many years, but you don’t really know what someone’s capable of until they start doing it.

“I’ve certainly gotten better at doing TV stuff — 10-plus years of News Breakfast and then five years of hosting New Year’s Eve with Charlie Pickering. Look, I’m ready to take on the world and become inescapable — at the ABC and whoever else wants to have me.

“But yeah, I think there’s a lot of love for comedians hosting TV shows, and maybe it’s more about the fact that I’m not a comedian than a gender thing.”

Now she has wrapped up season one of Take 5, Rowe has been thinking of guests she’d like for season two. She’s already spoken to Paul McCartney for the radio version of Take 5 — and still has his manager’s contacts saved in her phone — what bigger name could there be?

“I have been trying to chase Harry Styles for a Take 5,” she says. “He’s got such charisma. I want to be in a room where he is. He’s got that ‘it’ factor. When people are pitching different guests, the first question is ‘would you care about their five songs?’ Well, I’d be very interested to know what his five songs are.”

He’s touring in February next year — there’s your chance.

“He has the same PR as Paul McCartney,” she replies.

You’ve got an in!