Home » Lifestyle » Shirley you’re not a local? Time to head south, my friend

Shirley you’re not a local? Time to head south, my friend

Since joining the mini-exodus from Melbourne to Hobart six months ago, lured like so many others by the fresh air and fabulous views, I've followed with interest the local paper and its stories about giant gourds, letters bemoaning the city’s "horrendous" traffic, steady updates on the life of Mary, Crown Princess of Tasmania – sorry, Denmark – and a community diary which lists, among other things, the intriguing "Hobart Shirley Club" that welcomes "all Shirleys" to lunch every third Wednesday of the month, and makes me wish that I could change my name for a day. 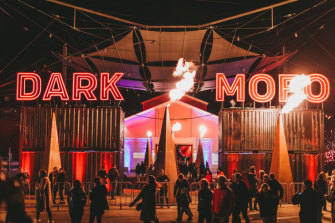 Dark MOFO atttracts a multitude of mainlanders to Hobart.

Last week, though, the front page sent me into a bit of a spin. "How to spot a mainlander" ran the headline beneath a photograph of a striking chap sporting designer stubble and sunnies, a polka-dotted shirt, black skinny jeans with a big-buckled leather belt, topped with the confident burst of a pink suit jacket. A smashing ensemble I thought.

"Mainlanders" were descending by the well-groomed plane-load into Hobart for its hugely popular winter festival, Dark MOFO, and locals were being primed on the visitors' peculiar sartorial whims. On page nine, the female of the species, from Melbourne, was pictured with her "leather gloves", "fashionable beret", "warm trench coat", and "designer trainers". I own three out of four such items.

It was all in good fun, but it did give me pause. After six months I certainly don't qualify as a local, and that's OK. We often extol the virtue of being "a local", and talk about how long it takes to live in a place before being accepted as one. But what about the merits of never quite belonging to one place or other, and the freedom that brings, the shifts in perspective, shaking up your sense of self and your place in the world.

Released from the familiar, you’re alive to the quirks of new home and old. Growing up in Melbourne as a child of Italian migrants I often felt caught between cultures. It's a common enough migrant experience. Moving to Hobart that disorienting feeling returned to some degree. I know it's best not to worry about it, and to simply observe.

But I've also found myself missing Melbourne more than I anticipated – I recognise how attuned I'd become to the city’s rhythms. I miss everything that once irked me – traffic, crowds, creeping skyscrapers, sullen skies. How perverse is that? It was only in leaving that I realised, after all, that I belonged. I won't be ditching my designer trainers any time soon.