Home » Lifestyle » The acting is exceptional, but why does this star biopic feel so uninspired?

The acting is exceptional, but why does this star biopic feel so uninspired?

This historic Nashville limited series, which depicts the chart-topping but crisis-laden union of two of country music’s biggest stars, is a referendum on whether exceptional performances can overcome conventional storytelling. Jessica Chastain and Michael Shannon are magnetic together as Tammy Wynette and George Jones, but this biographical drama about their marriage has a tendency to adhere to a timeline: an incident, a hit song, a leap forward. Those incidents are fiery, and the hit songs historic, yet they start to serve as mere bullet points. 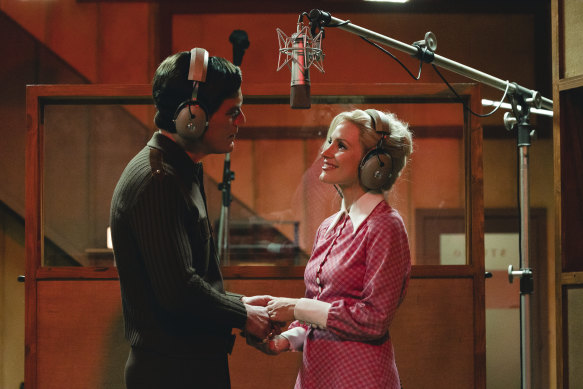 Playing the hits: Michael Shannon and Jessica Chastain in George and Tammy.Credit:Dana Hawley/Showtime

“I believe you have to live a song to make it good,” a hopeful Tammy Wynette tells her backing band before a 1968 support slot with country music’s biggest star, George Jones. The sentiment resounds with the headliner, whose excessive drinking and wild ways are part of his appeal. Both are married to other people, and both are instantly attracted to each other. A dinner where Tammy and her jealous husband, songwriter Don Chapel (Pat Healy), host George simmers before it explodes. In that moment the stars transcend their famous roles.

Adapted by Abe Sylvia (Nurse Jackie) from The Three of Us: Growing Up with Tammy and George, a 2013 memoir by the couple’s daughter, Georgette Jones, the series has a degree of insight and a contemporary view of the duo’s lives, especially the suffering Tammy endured at the hands of men, whether it was shock therapy for trying to leave a previous husband or negligent surgery that marred her health. But as with music biopics such as Ray or Bohemian Rhapsody, the Wikipedia entry narrative becomes ascendant.

All six episodes are directed by Australian filmmaker John Hillcoat (The Road), who understands that the sentiment is already writ large. As country superstars, Tammy and George – who duetted frequently – held up a version of their lives through songs. In a way the show is meant to be descriptive and even obvious – the lyrics were rarely oblique. The bulk of the show unfolds in the 1970s, although the focus rarely looks outside the couple. “It won’t happen again,” George promises after becoming violently drunk. But it does, repeatedly. 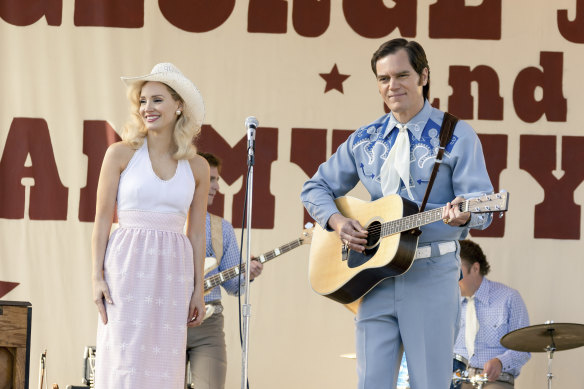 There are cliches here, whether it’s the self-destructive behaviour of George, or Tammy’s obsessive dedication to her career, but Shannon and Chastain never lose the emotional specificity of their parts. The former has a well of suffering that feels like a burden impossible to carry, while the latter lets you see how success hollowed out the best of intentions. You get full performances of the songs, not snatches, and the complete curse of their addictions. As celebrity biographies go, this middling show really is the greatest hits.

A Spy Among Friends ★★★★
BritBox

Less a thriller than a requiem for the British establishment, this espionage drama uncovers the headline saga of Kim Philby, an impeccably credentialled MI5 officer who in 1963 was revealed as a KGB agent after he escaped to Moscow. As played by Guy Pearce, Philby betrayed his country, colleague, and closest friends, including fellow MI5 luminary Nicholas Elliott (Damian Lewis), as if it was an almighty lark. 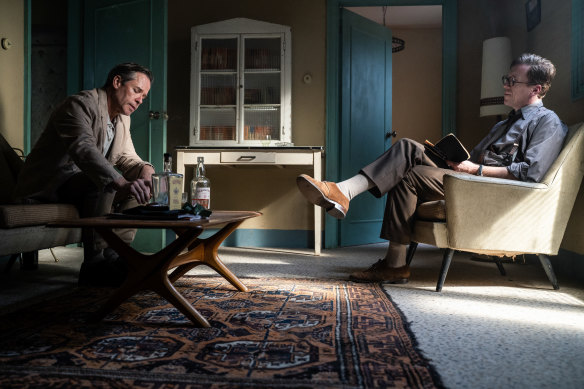 Compelling hypocrisy: Guy Pearce and Damian Lewis in A Spy Among Friends.

Liberally adapted by Alexander Cary from Ben Macintyre’s 2014 non-fiction book, the plot revolves around a series of long interviews: a blown Philby and Elliott in Beirut just before he fled, and just afterwards Philby and a Russian handler, Sergei Brontov (Karel Roden), as well as Elliott and an MI6 assessor, Lily Thomas (Anna Maxwell Martin). The truth is not only exhumed, but fact-checked via flashbacks.

Guilt is the currency, suffused through performances that turn restraint into cruel vindication, but it exposes more than individual failing. Asked how he could have so brazenly prospered for almost 30 years, Philby speaks of “the level of sentimentality and arrogance” that defined the ruling class. He and Elliott met at a private members club and worked at another in MI5. Few shows have made hypocrisy so compelling. 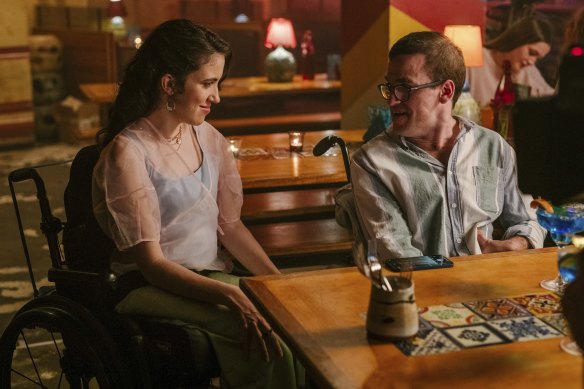 SBS’s recent run of success with micro-series – see Iggy & Ace and The Tailings – continues with this terrific comedy about two disabled 20-somethings seeking sexual experience in the face of society’s misperceptions and their own insecurities. Co-creators Hannah Diviney and Angus Thompson respectively play Sarah and Frank, who meet when their carers hook-up and end up pursuing a relationship and their own physical needs. The concept is handled with frank openness and an unapologetic sense of humour – the leads are thankfully flawed and plausible, not shining symbols. 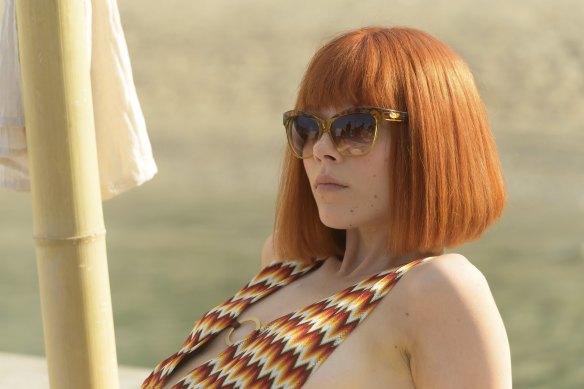 This boilerplate mystery about a group of graduates from an international prep school on the French Riviera whose buried secret involving a missing classmate is unearthed at their 25-year reunion is handsomely shot and neatly paced over six episodes, but the central characters rarely feel like anything more than pieces to be moved around a flashback-laden plot. The cast of the European co-production is headlined by Ioan Gruffudd (Harrow), but the more desperate he and his former classmates become, the more workmanlike the storytelling feels.

Helmut Newton: The Bad and the Beautiful
DocPlay 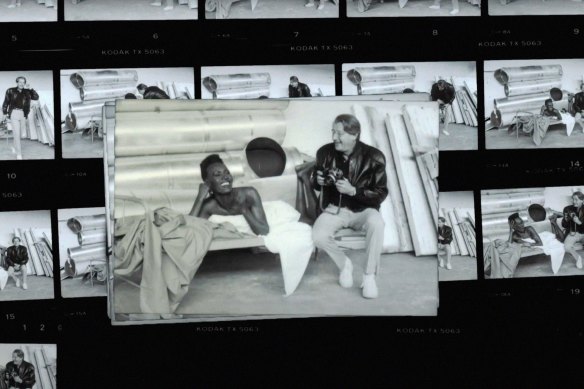 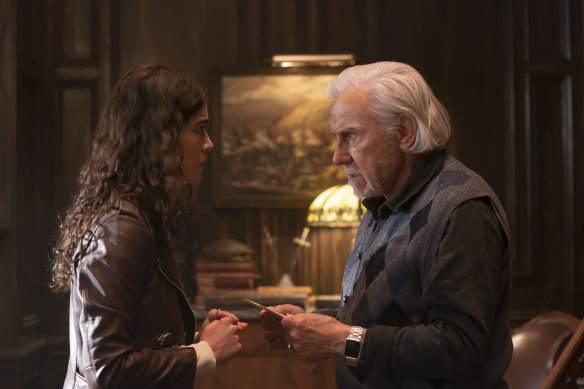 “I’m good at solving puzzles,” Jess Valenzuela (Lisette Alexis) declares early on in this teen-orientated reboot of the Nicolas Cage action-adventure movie franchise, which has Jess and her pals in Baton Rouge pursuing clues for Montezuma’s long-hidden treasure. With Catherine Zeta-Jones as a blonde and booted adversary this is a show of breathless encounters and hidden compartments with generic risks and extravagant clues. America’s propensity for wild conspiracy histories is shuttled safely into the past – hello to the Freemasons! – as the bad guys get thwarted.

* Stan is owned by Nine, the owner of this masthead.

Reward your time with these TV shows