Looks like Meghan McCain’s seat won’t be filled right away.

When “The View” returns for its landmark 25th season next week, it’ll do so with only four full-time cohosts.

According to ABC, the show will be back with only Whoopi Goldberg serving as moderator and Joy Behar, Sunny Hostin and Sara Haines as co-hosts. The network notes that Ana Navarro will continue her role as guest cohost throughout the season, while a number of “conservative voices” will be rotated through the panel as well.

Could these be auditions for a full-time slot? Only time will tell! 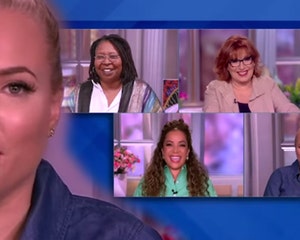 Meghan McCain Says Goodbye to The View, Apologizes to EP for 'Making His Blood Pressure Rise'

The show’s executive producer Brian Teta said they’re “taking a little time” to find someone to fill the spot left open by Meghan McCain’s exit — and said, to celebrate the show’s 25th season, the series will be “inviting back all of our legendary lineup of former View co-hosts to guest.”

The parade of former cohosts will begin with Star Jones stopping by for for a Flashback Friday episode on September 10.

“We have so much planned to honor this amazing platform that Barbara Walters created, added Teta. “I can’t think of a better way to kick off that celebration than by welcoming the co-hosts back to the iconic View table and to have them in front of a live studio audience again. We have some truly exciting plans to celebrate this anniversary all season long.”

Also adding to the excitement: the panel finally returns to the studio for the first time since March 2020, after filming from home amid the coronavirus pandemic. Watch a teaser of their return below: