Clowning glory! Mischievous toddler ends up looking like Pennywise from the horror film It after getting her hands on hair removal cream and ending up with a bald patch

A troublesome tot was ‘left looking like Pennywise the Clown’ after smothering her ginger locks with hair removal cream – creating a huge bald spot like the horror villain.

Maisie Saward, from Blackfield, Hampshire, had crawled into the bathroom unnoticed last Friday evening when she picked up the wrong tube while trying to mimic her dad, Luke Saward, gelling his hair.

Once Luke realised the 18-month-old was smearing Superdrug hair remover across her head, he tried to wash it out in the bath – but it was too late.

Maisie’s three-inch fringe was completely removed in the blunder and hilarious pictures show the tot’s hairline now creep all the way to the centre of her head.

Family pals even compared Maisie’s new look to the horror film clown Pennywise who’s known for his large forehead and ginger locks flowing from his otherwise-bald scalp in the most recent adaptation of Stephen King’s It. 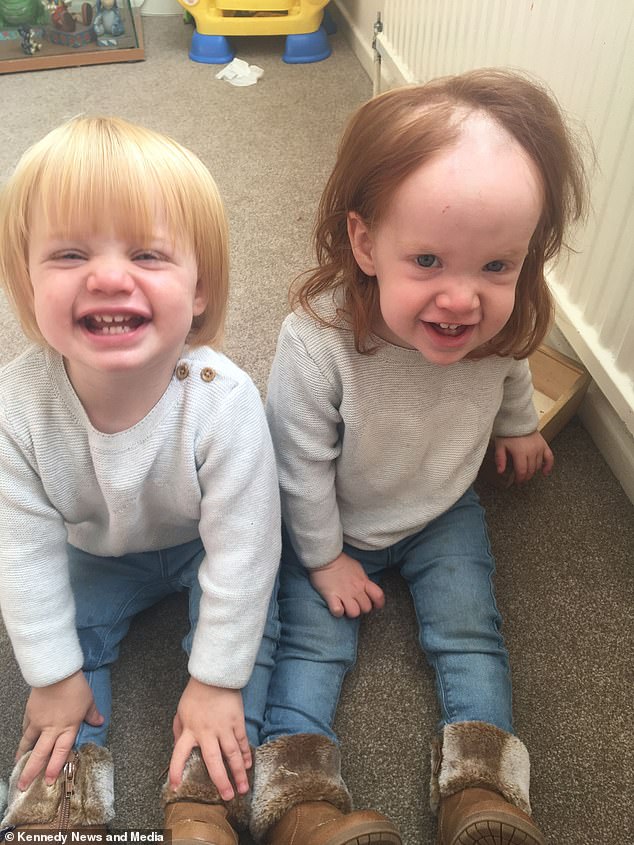 Mother Kirsty Saward was in ‘pure shock’ when she got home from her Avon round to see what had happened while she was out – but she’s since seen the funny side.

The mother-of-three says Maisie loves her new look however the concerned parents tries to hide it by pinning hair across her gaping bald spot.

Kirsty said: ‘I’d called Luke and he said “Maisie’s got no fringe left”, but the phone broke up, so I just thought she’d got hold of some scissors.

‘When I got home I was just in pure shock. She came and gave me a cuddle and I just cried for an hour because I absolutely loved her fringe. 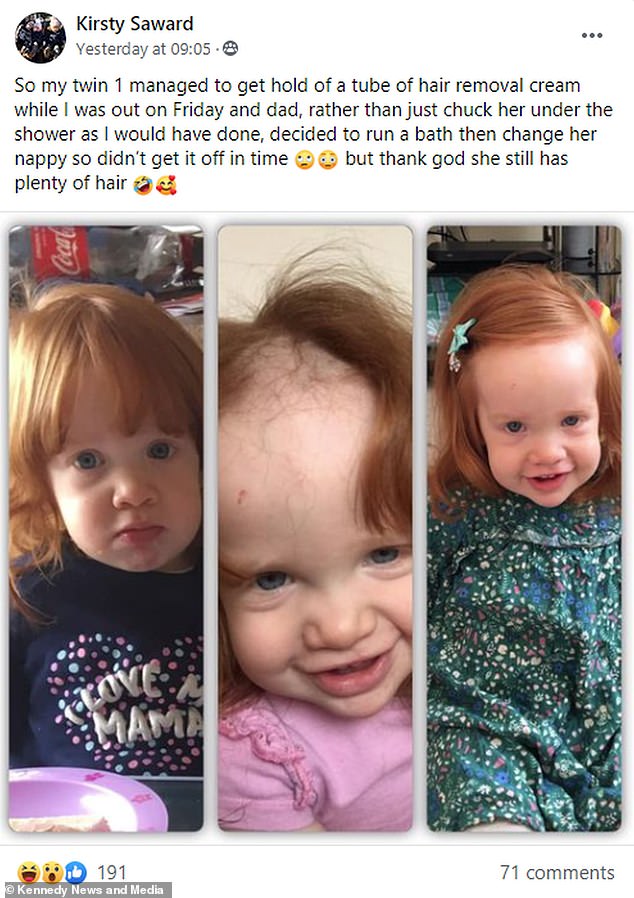 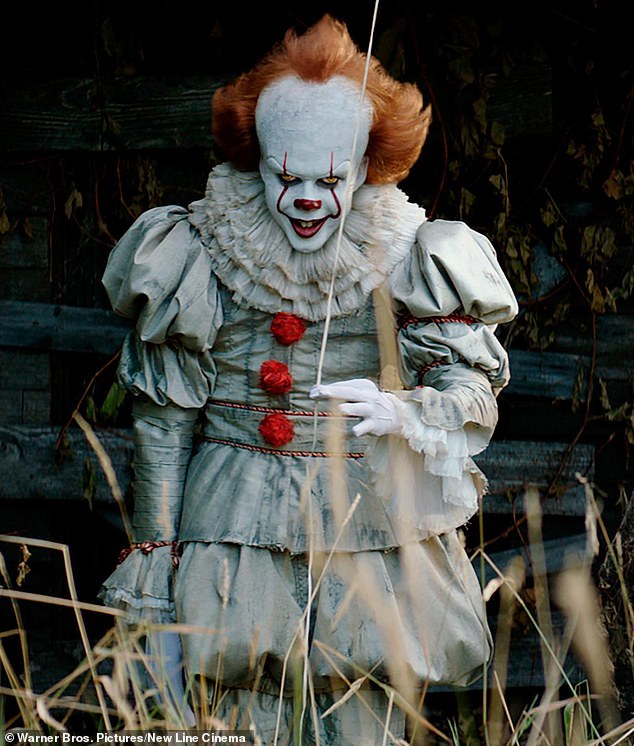 Friends of the couple have said Maisie could dress up as Pennywise, the clown from the most recent movie adaptation of Stephen King’s IT (pictured) for Halloween

‘Rather than just shove her under the shower, [Luke] ran her a bath, got her changed and it took about 10 minutes before he even thought about taking it off.

‘If I hadn’t been out for so long maybe I’d have been able to deal with it myself. I didn’t speak to him for a couple of hours, but the next day I started to see more of the funny side.

‘Maisie found it hilarious and she still does. She was born with a full head of hair, so she’s never been bald. She keeps finding different surfaces to rub it up against because it feels funny.

‘When she gets tired, she rubs her bald patch, and every time I go to take a picture she bends her head down so you can see it. She’s loving it.

‘Someone even said we should dress her up as Pennywise for Halloween. That would have been a good idea if we could go trick or treating, so we enjoyed laughing at that.’ 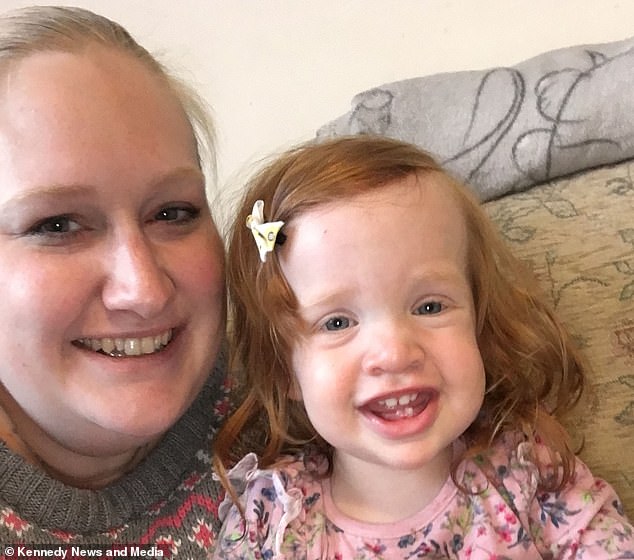 Mother-of-two Kirsty has been trying to hide Maisie’s new do with hairpins, but the toddler loves her bald patch 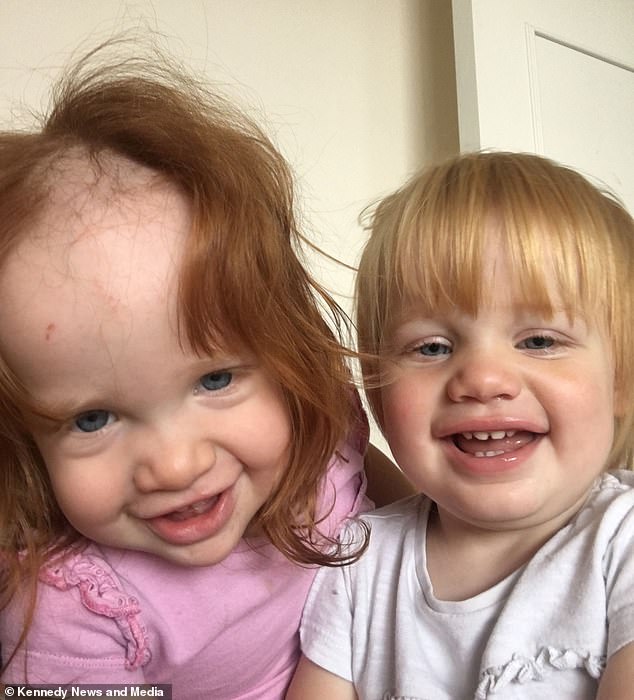 The twins together. While her mother cried over her fringe for a hour, Maisie, pictured with Eva, found the whole affair rather funny

When Ollie left the bathroom door open too, inquisitive Maisie crawled in, grabbed the tube and smothered the cream over her head before 37-year-old Luke found her smiling up at him.

He ran her a bath and tried to rub shampoo into her hair to get the cream off, but clumps of her hair were falling into his hands, so he dried her off and waited for Kirsty to come home.

Kirsty said: ‘Maisie’s very independent, so we’ve always got to keep an eye on her to see what she’s up to.

‘Luke gets ready in the downstairs bathroom and Maisie sometimes goes in with him. The hair gel tube is the same shape as the hair removal cream, so she must have been trying to copy him.

‘Somehow she’s managed to learn to unscrew tops off tubes and found the only tube of hair removal cream in the house.

‘Parenting, especially with twins, isn’t easy, and if this makes even one other mum feel better then that’s great.’

On Wednesday, Kirsty gave Maisie a new combover hairdo to mask the bald patch but she admits it’s hard to maintain because Maisie likes to play with her hair too much. 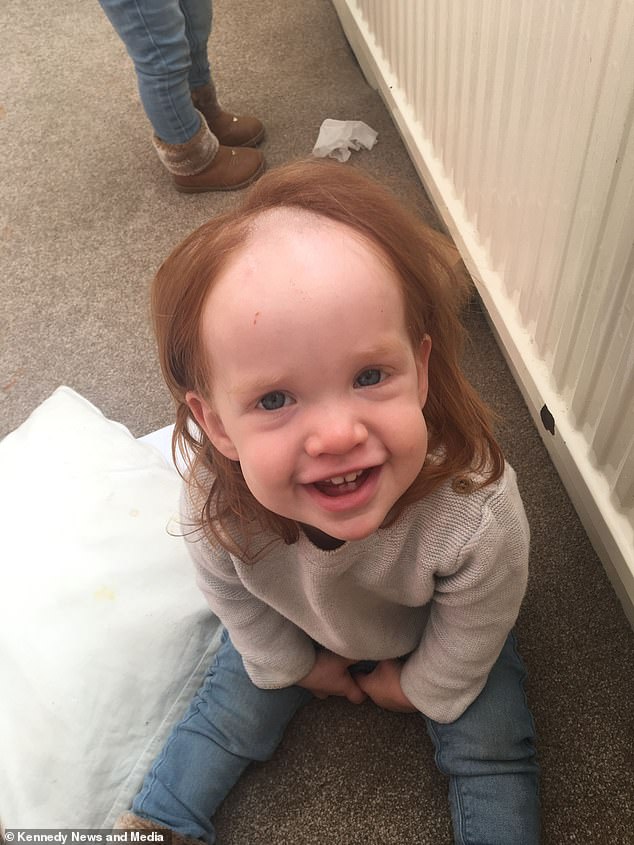 Maisie’s father Luke, 37, ran her a bath before taking the cream out, meaning it had plenty of time to eat away at her hair

A tiny amount has started to grow back since last Friday and the mother-of-three joked she hopes her little troublemaker won’t need to wear a hat when it starts getting warmer next year.

Kirsty’s shared her misadventure on Facebook, writing: ‘So my one-year-old twin managed to get hold of a tube of hair removal cream while I was out on Friday.

‘Dad, rather than just chuck her under the shower as I would have done, decided to run a bath then change her nappy so he didn’t get it off in time. But thank god she still has plenty of hair.’

One Facebook user commented: ‘Oh bless her! This made me laugh so much. I hope dad has learned his lesson. What a great story, and she looks fabulous in all of the pictures.

Kirsty replied: ‘I think dad has definitely learnt his lesson.’

Another added: ‘This is a picture for her wedding day.’