“I am so honored and excited to celebrate Tony’s 95th birthday with him at these special shows,” Gaga wrote.

Lady Gaga and Tony Bennett will soon be taking the stage together, likely for the last time.

On Monday, it was announced that the singers will be performing at Radio City Music Hall in New York City next month.

“One Last Time: An Evening With Tony Bennett and Lady Gaga,” which will only consist of two shows, is said to be Gaga and Bennett’s final performances together. The first performance will take place on August 3, Bennett’s 95th birthday, while the second, and final show, will be on August 5. 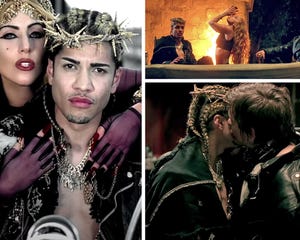 Gaga, 35, posted about the announcement on social media.

“I am so honored and excited to celebrate Tony’s 95th birthday with him at these special shows,” wrote the pop star, who began collaborating with Bennett back in 2011.

Back in February, Bennett’s family revealed in a feature with AARP magazine that the legendary jazz singer was diagnosed with Alzheimer’s in 2016. The Grammy winner’s neurologist “strongly encouraged” that the singer continue to sing and perform, as it both keeps him “on his toes” and stimulate his brain in “a significant way.”

After Bennett’s diagnosis and showing “clear signs of the disease,” Bennett and Gaga recorded a followup to their 2015 duets album “Cheek to Cheek” between 2018 and 2020. The album is set to be released later this year.

The pair’s performances at Radio City next month — which will celebrate Bennett and Gaga’s “decade of music and friendship” — will be Bennett’s “last NYC performances of his career,” per the concert event’s press release.

“We couldn’t be prouder to host such a special engagement with two of the most iconic entertainers of our time,” Darren Pfeffer, Executive Vice President, Live, Madison Square Garden Entertainment, said in a statement. “Both Tony Bennett and Lady Gaga are synonymous with New York City, making the Great Stage at Radio City Music Hall the perfect place to honor their decade long friendship and celebrate Mr. Bennett’s 95th birthday.”

According to the press release, the “One Last Time” concerts will “feature song renditions from the Great American Songbook of popular and jazz standards that Bennett and Gaga have claimed as part of their legacy over the past decade.”

In addition, guests won’t be allowed to bring in cellphones, cameras or recording devices.

General tickets for “One Last Time: An Evening with Tony Bennett and Lady Gaga” go on sale on Thursday, July 22 and 10:00 am/ET/PT on LiveNation.com