Travel pros reveal how to get a FREE hotel upgrade

The psychological trick that can help YOU snag a free hotel upgrade: FBI negotiator reveals cunning mind game that will win over staff – as travel experts share top hacks for elevating your experience without paying

Ever wanted to sample the ‘suite’ life?

Well now you can after a number of travel pros have detailed how to land free hotel upgrades on TikTok, including former FBI hostage negotiator Chris Voss.

Voss sheds light on a cunning psychological trick he learned from his son, who he describes a the ‘main negotiator’, after they checked into a hotel together.

Just by employing a spot of reverse psychology, Voss’ son landed a presidential suite, while dozens of other TikTokers say they have their own hotel upgrade tricks, with everything from tipping to lying about special occasions on the table.

Read on as FEMAIL rounds up some of the top tips as detailed by avid travelers and industry insiders. 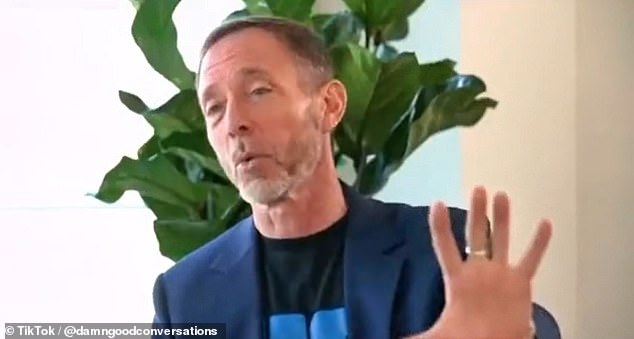 Voss says he checked into a hotel with his son, and despite his son paying less than him he managed to get a better room thanks to his simple mind trick.

He claims his son walked up to the front desk and said to the receptionist: ‘I’m getting ready to make your day the most difficult day you ever worked here.’

Apparently this piece of reverse psychology saw Voss’ son secure the hotel’s presidential suite as the receptionist was so relieved that nothing more sinister was going to happen.

‘Somebody who works behind the counter of a hotel… I mean God knows what they’ve seen,’ Voss said.

2. Let them know if you’ve had a bad experience

Sammie Kahkola, who works as a front office manager at an upscale Kimpton Hotel in Los Angeles, says if you have had a bad experience it is worth letting the front desk know and they might be able to upgrade you as a result.

This can include everything from a plumbing issue to a faulty TV.

The hospitality insider and part-time actress says: ‘Well we never hope this has to happen, sometimes we will upgrade you if you’ve had a bad experience.

‘And sometimes me personally, I will upgrade you if you’ve even had just a stressful day.’

3. Be nice to hotel staff, it’s that simple 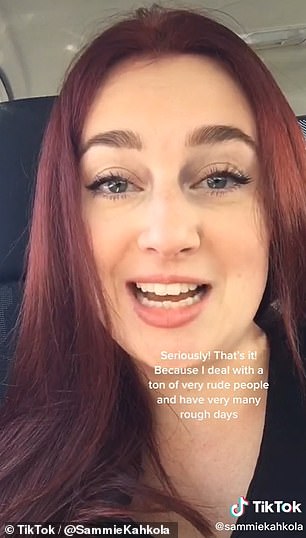 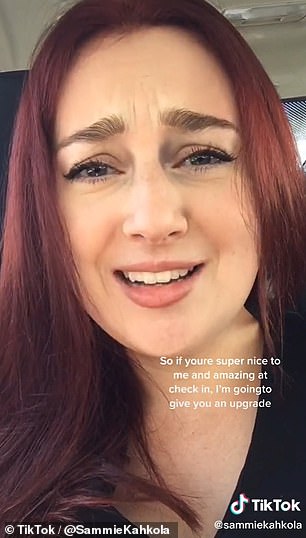 Sammie Kahkola, who works as a front office manager at a Kimpton Hotel in Los Angeles, says ‘being nice’ is of upmost importance

Sammie also says ‘being nice’ is the number-one thing when it comes to upping your chance of getting an upgrade.

She explains: ‘Seriously that’s it. Because I deal with a ton of very rude people and have very many rough days… so just being nice? Oh my gosh that’s going to go a long way and I want to give you the world.

‘So if you’re super nice to me and amazing at check in I’m going to give you an upgrade.’

4. Always book direct through the hotel 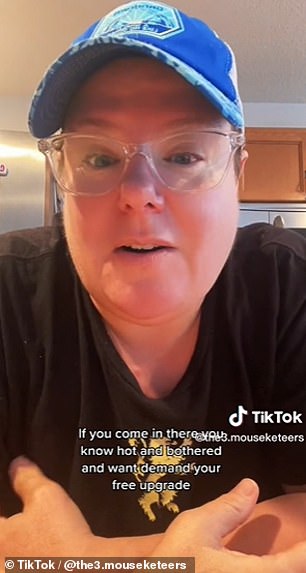 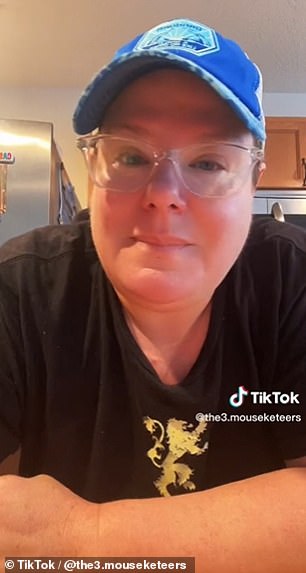 Most of the avid travelers advise booking directly through a hotel instead of going through a third-party website.

Florida-based TikTok creator Sara says she is married to the general manager for a ‘very large’ hotel brand and she’s learned it’s near impossible to get an upgrade if you’ve booked through another provider.

She explains that the booking must be made ‘directly through that hotel’ and then it’s ‘up to the front desk’s discretion’ if your room will be bumped up a level.

Sara also highlights if you book direct with a hotel, sometimes you will secure a better rate.

If you don’t, you can call the hotel and say you saw a better rate through a third-party website, and they should be able to do a price match or outdo the rate.

The Sandwich Trick To Get Free Hotel Upgrades 🥪💵🤯 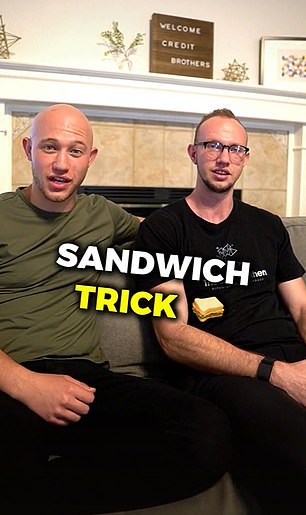 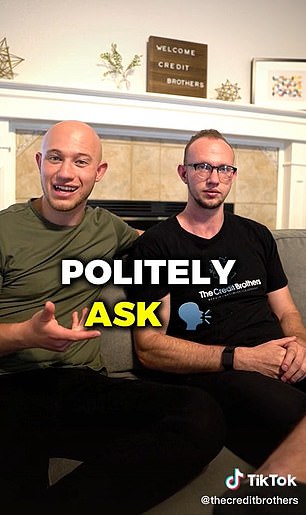 The ‘Credit Brothers’ outline what the ‘Sandwich Trick’ involves, saying a small cash tip can go a long way

Many of the experienced hotel-goers refer to something known as the ‘Sandwich Trick.’

Detailing what this involves, TikTok duo the Credit Brothers outline three key elements: your credit card, your license and a $20 bill.

These are then sandwiched together and given to the receptionist at check-in, with the hope of an upgrade.

The Credit Brothers highlight that a small cash tip can go a long way.

They continue: ‘Let’s say you just booked a room at the W in downtown Miami and you want to get a spectacular suite.

‘Before you go up to the front desk go online and check the availability of the nicest rooms available in the hotel over the dates that you’re staying at, that way when you go up with those three things [sandwiched] in hand, you’re going to hand that to the receptionist… and you’re gonna politely ask if they have any room upgrades.’

They highlight that hotel staff don’t always give upgrades ‘because they just simply don’t have availability, but by using this trick you’re going to greatly increase your chances of getting upgrades at places that you don’t have status with.’

6. Check into the hotel as late as possible 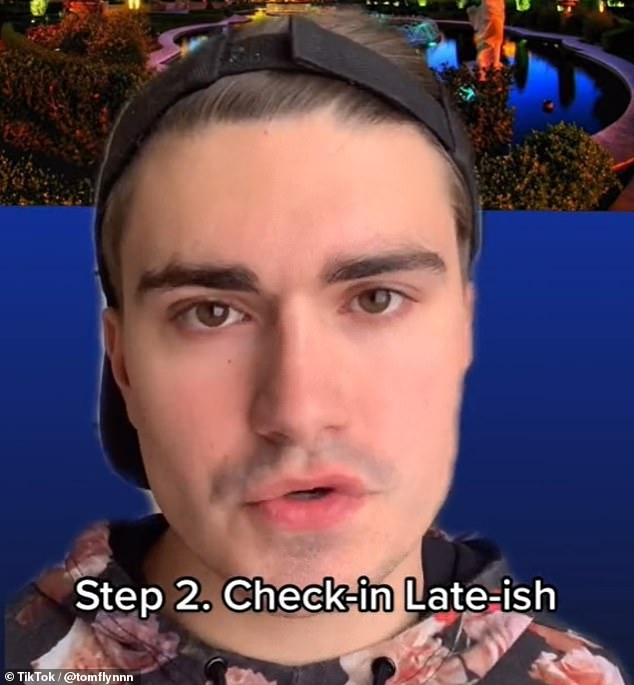 Tom Flynn advises checking into the hotel as late as possible

Creator Tom Flynn, who regularly posts videos around money and life hacks on TikTok, advises checking into the hotel as late as possible.

He recommends getting to the front desk between 4pm and 6pm.

Explaining why, he says: ‘You do this because that way the front desk has time to see if there are any no shows or cancellations for that day.’

Many travel pros say that if you’re celebrating a special occasion, such as a birthday, anniversary, honeymoon or promotion, you’re more likely to get an upgrade.

Tom Flynn instructs: ‘When you’re checking into the hotel you’re going to tell the person at the front desk that you’re celebrating something.’ 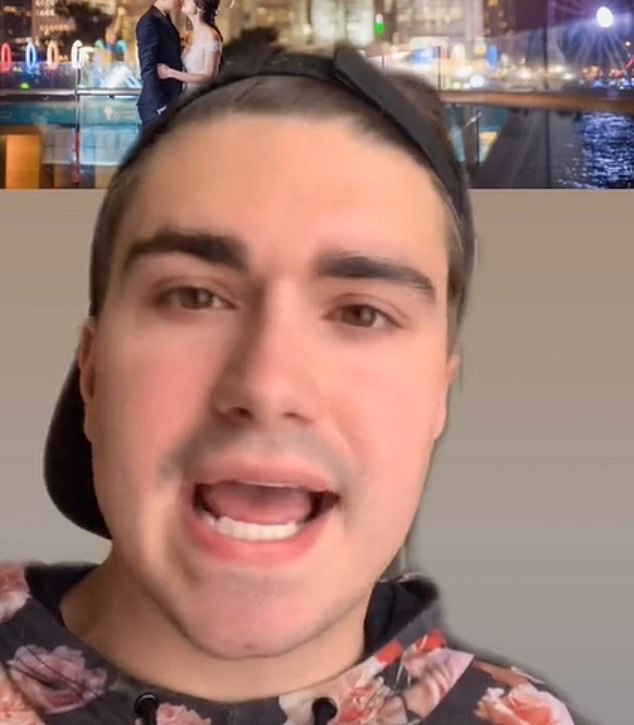 Tom Flynn says that if you’re celebrating a special occasion, you’re more likely to get an upgrade

He says even if your anniversary is 11 months away, there’s no point getting ‘get bogged down with the details’ and it’s all about having confidence in telling your story.

‘The thing is you’re celebrating your one-year anniversary with someone you love and you want to let the whole world know about this,’ he concludes. 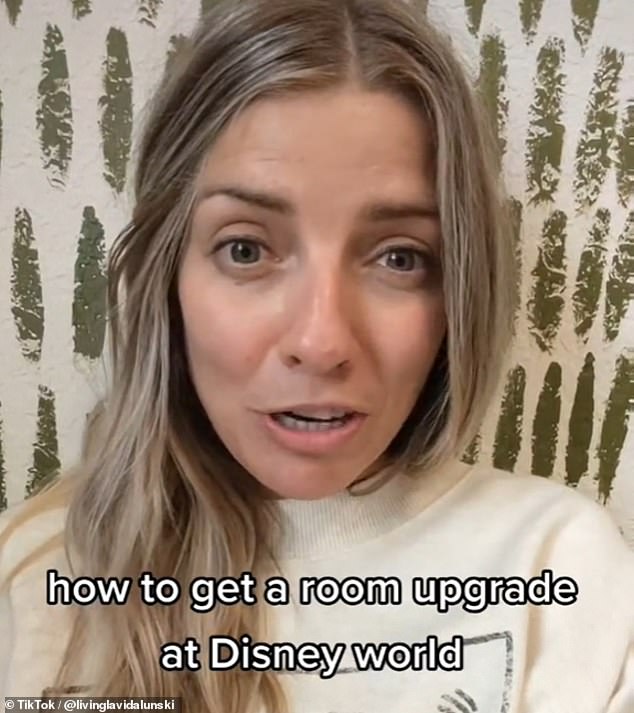 Brittney Lunski, who posts about Disney vacations on TikTok, touches on the virtual check-in feature, which an increasing number of hotels have started offering with the rise of digital keys.

She says while using an app allows you to be all checked in before you arrive at your hotel and you can skip the line at the front desk, it means you don’t get to talk to a member of staff who could potentially upgrade your room to a better category.

Instead she advises: ‘When you arrive at your resort go to the front desk. Tell them if you have any special requests.

‘Let’s say you’re in a two queen room and you’d actually like a king bed ask if there’s any rooms with king beds available… Often times you can get a better room.’

Hotel employee and TikToker @justintime245 urges people to join a hotel rewards program as these will bring many benefits, from free room upgrades to complimentary breakfasts.

Detailing some of the perks of being a hotel loyalty member, he says: ‘You get a late checkout, you get extra bonus points, you get a free breakfast, you get all these kind of things with status including complimentary room upgrades.’

The hotel worker says if his hotel is sold out of king rooms and a ‘gold member’ comes in, they will be upgraded to a suite, while a ‘normal person’ will go into the king room instead.

For people who travel for business, @justintime245 highlights that it will be much easier to earn points quickly. He concludes: ‘Obviously earning points takes a lot of time and money but if you have a company that pays for your hotel rooms, add your number, you get the points and basically you’ll just fly through the rankings.’

If you enjoyed reading this article…

Claridge’s extraordinary five-storey iceberg basement – the UK’s biggest – has added a luxury spa, cinema and swimming pool to the Mayfair hotel – but had to be dug by HAND over seven years to keep noise levels down

Room WITHOUT a view! Disappointed guest reveals surprise after opening hotel window – to find it looks out onto a corridor