Why Chris Randone Sees Himself in Brendan Morais Amid 'BiP' Backlash 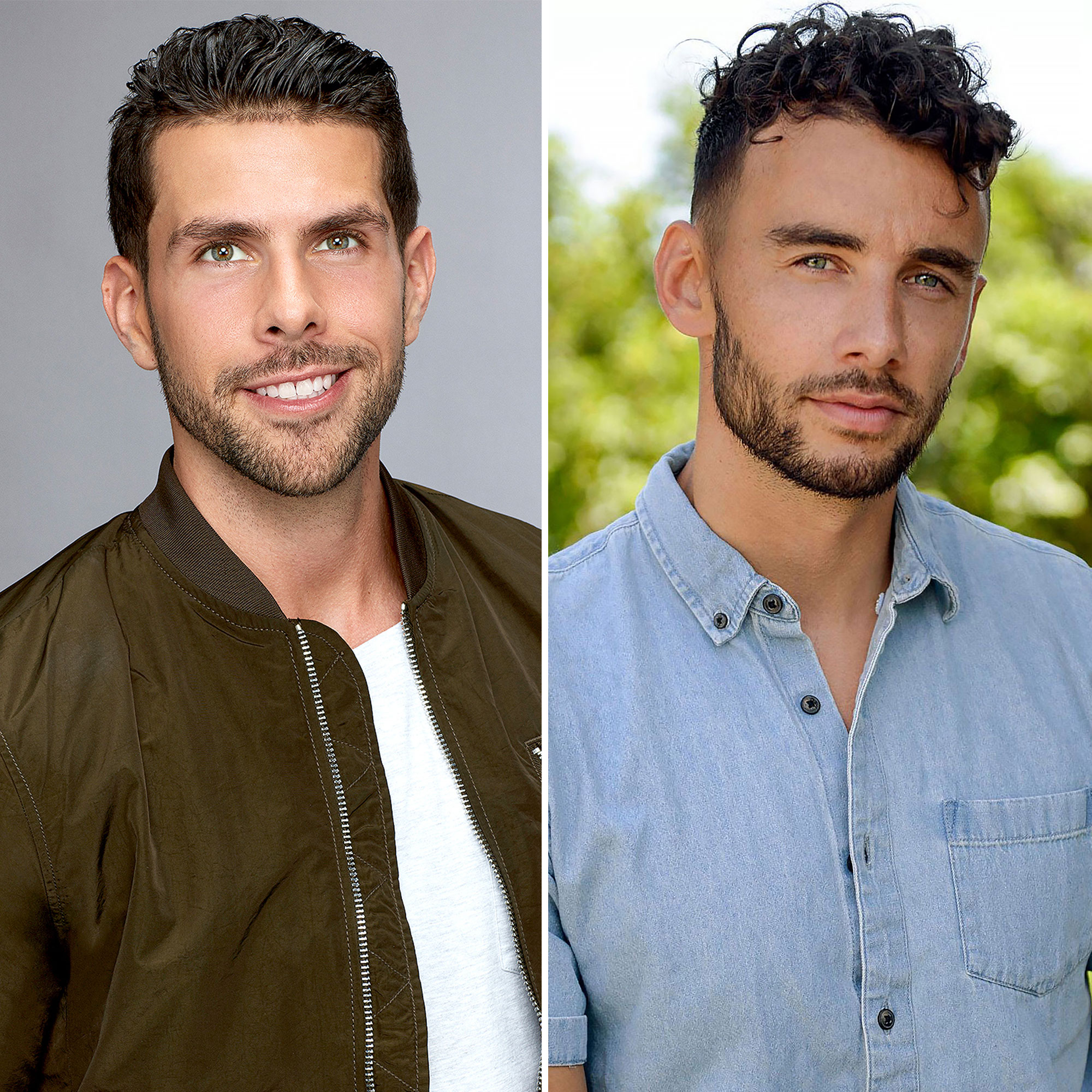 Bachelor’s Pieper and Brendan’s Relationship: Everything We Know

“My thoughts: I think he’s running around like a chicken with his head cut off and needs to just stay away from all of this,” the season 14 Bachelorette alum, 33, wrote in a comment on Bachelor Nation Scoop’s Instagram account after Brendan, 31, issued a public apology on Thursday, September 16. “He’s a divorcee and it clearly shows, he’s still going through it mentally so this show, fam, etc isn’t the best environment because when you’re still in pain, this type of behavior [can] happen unfortunately to incredible people like Natasha [Parker].”

Brendan initially seemed interested in Natasha, 33, but he came under fire as rumors spread about his prior relationship with Pieper James, who eventually joined the cast on the beach. The Oregon native, 24, immediately asked Brendan on a date, leading some contestants to wonder whether the pair made plans to meet up on the show.

Us Weekly exclusively confirmed before filming for season 7 began in June that Brendan and Pieper were an item. As the saga played out on the ABC spinoff, the model asserted that he and the season 25 Bachelor alum weren’t exclusive.

“I absolutely went to Paradise [as] a single man,” he said in his seven-minute apology video on Thursday. “As far as Pieper and I having this big, elaborate plan, I’m not the smartest person in the world, for sure, but I feel like it would have gone just a little bit better than it did if we had this plan. Of course, it went horrible in every way.”

Chris, who previously appeared on season 5 of BiP, noted that he thought Brendan was trying to use the show “as a bandaid” to deflect from the pain of his past divorce.

“He’s mentioned his divorce countless times on Tayshia[‘s season] and Paradise, [a] clear cut sign that he hasn’t forgiven and accepted,” the Change Your Mindset, Change Your Energy, Change Your Life author claimed. “This could very well be a projection but I realized some similar things I saw in myself in [the] early stages of divorce.”

The Florida native clarified that he doesn’t think the end of a marriage should be used as “an excuse,” but should be “a moment to self reflect, take a step back and do some inner work.” 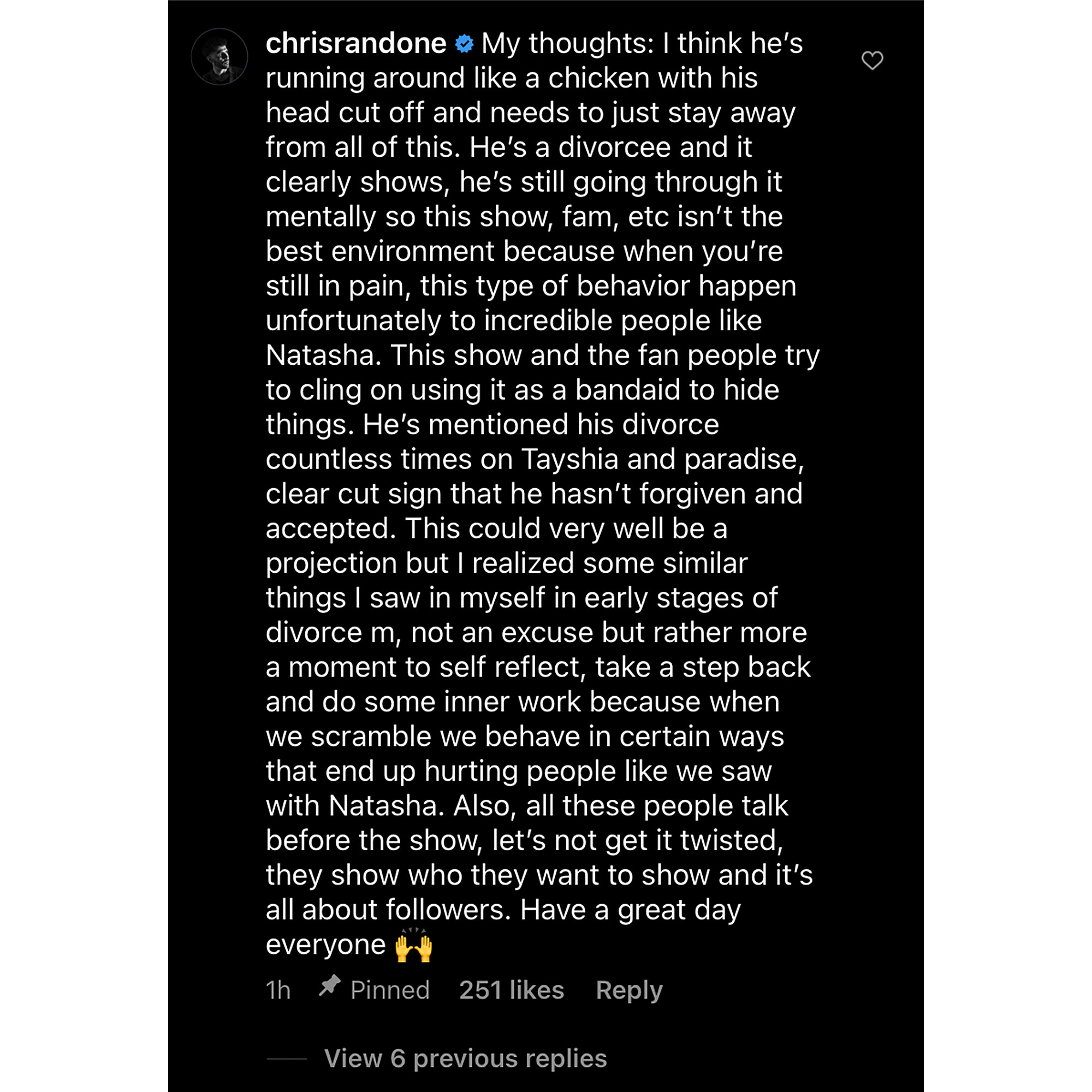 He continued, “When we scramble, we behave in certain ways that end up hurting people like we saw with Natasha. Also, all these people talk before the show, let’s not get it twisted. They show who they want to show and it’s all about followers.”

In February 2020, Chris split from wife Krystal Nielson, who he met on the beach in Mexico in 2018. Their June 2019 wedding was shown on season 6 of the reality dating series and was officiated by former Bachelor franchise host Chris Harrison.

BiP’s Chris Randone and Krystal Nielson: The Way They Were

Several months after his breakup, Chris admitted he wasn’t totally caught off guard when his relationship fizzled out.

“There were definitely moments where there were either warning signs or there were just mixed signals,” he told Us exclusively in August 2020. “I think one of the biggest issues was me going from one show to the next, with really no time to process. … I couldn’t process it or focus on that or just be able to address it because I had a relationship [and] I was engaged and then that turned into a marriage.”

Krystal, 33, went on to welcome daughter Andara with boyfriend Miles Bowles. The little one arrived in March, three months after she and Chris finalized their divorce.

Bachelor in Paradise airs on ABC Tuesdays at 8 p.m. ET.