Brazilian chair umpire Carlos Bernardes suffered a heart attack while in Melbourne quarantine this week, but organisers of the ATP tour say he is recovering well.

Photos of Bernardes being wheeled from his hotel accommodation into an ambulance were posted on social media. 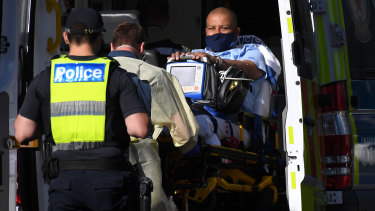 Carlos Bernardes is taken away in an ambulance from his hotel.Credit:Joe Armao

"Following admittance to hospital (non-COVID related) on Wednesday in Melbourne, we are pleased to report that ATP umpire Carlos Bernardes is recovering well," said the men's tennis association.

"Carlos passes on his gratitude for all the well wishes he's received, and we wish him all the best for a full recovery.

Brazilian website TenisNews reported he was expected to be released from hospital on Saturday.

Brazillian website tenisnews said he was doing well and was expected to be released from hospital on Saturday.

More than 70 players are confined to their hotel rooms for 14 days and unable to train after passengers on three charter flights returned positive tests for COVID-19.

Other players who arrived on different flights are also undertaking a mandatory quarantine, but are permitted to leave their hotel rooms for five hours a day to train.

With Reuters and Rachael Dexter