Ash Barty and doubles partner Kiki Bertens didn't leave with the silverware but the world No. 1 said she enjoyed some valuable court time at the Brisbane International after a surprise second-round exit from the singles. 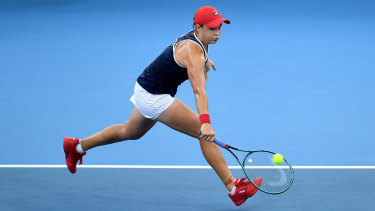 Ash Barty reaches for a backhand during the doubles final of the Brisbane International. Credit:Getty

Many had expected Barty to be taking part in the latter but she would make only one appearance at her hometown event, getting a bye through the first round before losing to American qualifier Jennifer Brady in the second.

Even for a player of her stature, time on the court is vital after an off-season break and ahead of a Grand Slam. She was able to enjoy some of that in the doubles, which remains a passion of hers even when at the top of the women's game. 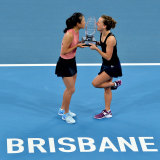 "You can't replicate kind of that last 30 or 40 minutes of that match in practice. It's nice to get (that) early in the season in, particular… I crave it. I love it."

Barty's crisp volleying game and control from her backhand, especially, have partly been a byproduct of her doubles career, which is where she first started to make her mark on the WTA Tour.

"I love coming out here, you get the serving returns under pressure. Obviously, you get the transition moving forward but yet you get court time, which is important."

Barty will be the top seed in Adelaide in another deep tournament. She will no doubt crave a longer run in the singles in a city where's she has played cricket but not at its major tennis tournament.