Home » Sport » Clippers' Doc Rivers: 'Maybe we should send our game plan to the White House'

Clippers' Doc Rivers: 'Maybe we should send our game plan to the White House' 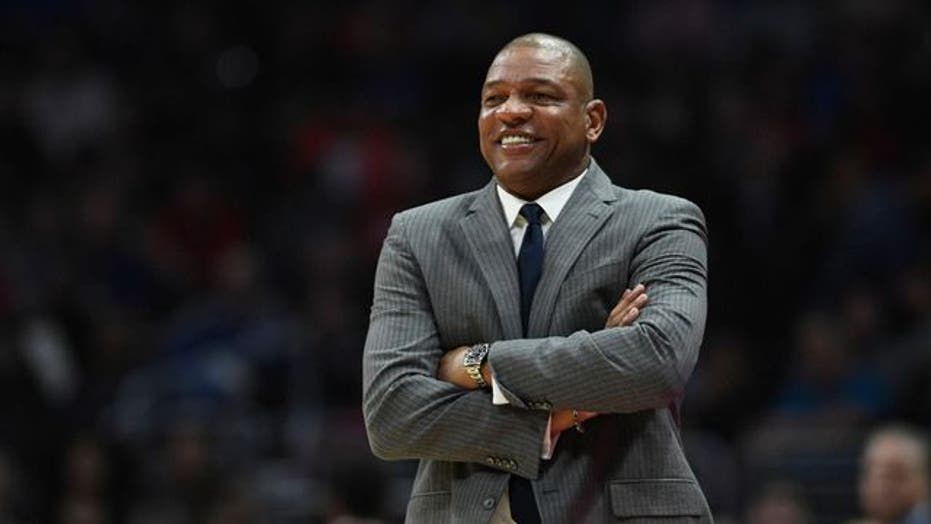 ‘Somebody needs to be standing up to the NBA,’ says Senator Josh Hawley criticizing the NBA over its handling of China

After no NBA players in “the bubble” in Florida tested positive for the coronavirus, Los Angeles Clippers head coach Doc Rivers credited the league for its testing protocols, as well as their mandatory mask requirement and symptom checks.

“Maybe we should send our game plan to the White House,” Rivers said smiling.

LEBRON JAMES SPEAKS OUT: 'NOTHING IS NORMAL IN 2020'

The league made the announcement on Monday that no players tested positive for COVID-19.

“Of the 346 players tested for COVID-19 on the NBA campus since test results were last announced on July 13, zero have returned confirmed positive tests,” a statement said.

The statement added: “In the event that a player on the NBA campus returns a confirmed positive test in the future, he will be isolated until he is cleared for leaving isolation under the rules established by the NBA and the Players Association.”

NBA: NO PLAYERS TESTED FOR CORONAVIRUS IN 'THE BUBBLE' WERE POSITIVE

The July 30 restart of the season will be hosted at Walt Disney World.

Only 22 of the league's 30 teams are participating in the NBA restart.

The first exhibition games of the NBA restart beginning this week will go a little more quickly than usual.

The NBA is tweaking the rules for those initial matchups, going with 10-minute quarters instead of the usual 12 minutes. The change is for several reasons — among them, not wanting to overly tax players’ bodies after they went more than four months without games, and because some teams do not have their full rosters at Walt Disney World yet because of coronavirus and other issues.

Exhibitions start with a four-game slate Wednesday and continue through July 28. Each team will play three exhibitions, and the last two for each club will have the traditional 12-minute quarters. Plans call for all 33 exhibitions to be televised by some combination of local TV, national TV, NBA TV or NBA League Pass.

The league is still working on some of the specifics for the first games, including whether to give teams the option of wearing uniforms or practice gear. Most teams, as of Saturday, were still planning to wear their usual regular-season uniforms for all three of their exhibitions — the new jerseys featuring social justice messaging will not debut until the seeding games that count begin July 30.