KHABIB NURMAGOMEDOV has met with UFC president Dana White to begin discussions over a potential return to the octagon.

The UFC's lightweight champion rendezvoused with White on Friday afternoon ahead of UAE Warriors' latest show in Abu Dhabi. 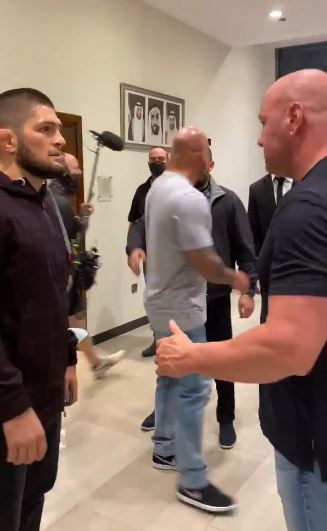 White announced their eagerly-awaited meeting to the world on Twitter, sharing a video of them going into a private room and closing the door.

White, like many others, was stunned by the Russian's decision to hang up his gloves, which stemmed from the passing of his late father.

The UFC chief, however, is confident of convincing The Eagle to return to the cage.

White told ESPN: “I’m obviously meeting with him because I think that he should fight again.

“Look at what he did to Justin Gaethje [in October].

"Look at what he's done to every opponent he has faced.

"I think he should fight again and I'm going to press him as hard as I can for one more.”

He added: "As a promoter, you always want to see the best guys in the world, but at the same time, when a guy wants to retire, he probably should.

"The difference with a guy like Khabib is he's been through so much, and losing his dad was a major blow to him. Yet, his dad wanted him to hit 30-0.”

Nurmagomedov, 32, promised his mother he'd retire from the sport as she told him she no longer wanted him to fight without his father.

The Dagestani destroyer is seemingly dead set on not competing again, but his head coach – Javier Mendez – reckons White will tempt him to lace up his gloves again with a mouth-watering offer.

Mendez told SunSport: "I think Dana has it in his mind to give him an offer he can't refuse."

The American Kickboxing Academy chief added: "Let's face it, how many times has Dana failed at doing something he wanted to do? Not much. Dana does what he says."

Mendez is in the dark over Nurmagomedov's plans but will respect whatever decision he makes.

He said: "I wouldn't rule that [a return] out whatsoever. No way, no way. As far as I'm concerned, retired, not retired, fighting, not fighting, it's all open.