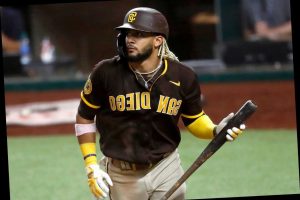 One MLB team literally has no chance to make the playoffs

Fernando Tatis Jr. and the San Diego Padres have agreed to a 14-year, $340 million deal on Wednesday, The Post’s Joel Sherman confirmed.

The deal makes Tatis the highest-paid shortstop and the third-highest paid major league player ever. Mike Trout ($426,500,000) and Mookie Betts ($365,000,000) are the only players with bigger contracts.

This is just the latest in a series of big moves the Padres have made this offseason. They acquired pitchers Yu Darvish and Blake Snell in trades with the Cubs and Rays respectively.