A rabbit made a Bugs Bunny-style escape at a greyhound race in Ballarat on Wednesday night, with the oblivious dogs streaking right past the lucky animal.

It’s not exactly uncommon to see a rabbit, snake or random kangaroo pop up in Australian racing coverage – be it in greyhounds, thoroughbreds or trots – but it doesn’t make it any less hilarious when it does happen.

The race, which was the fourth at Ballarat on Wednesday night, was abandoned due to the fluffy intruder.

All the dogs were keen to tear around after the lure except for number 3, Man of Power, who did appear to be excited by the presence of the rabbit, cutting off a few of the other racers before continuing.

The footage highlights that greyhounds are not trained to catch a rabbit, specifically, but instead chase the sight and sound of the lure during races.

That point wasn’t lost on prominent WA trainer Amanda Oliver, who took aim at greyhound racing critics, who commonly claim trainers use live or dead rabbits to lure a dog into racing.

‘Just goes to show they actually don’t even know what a rabbit is and would rather chase an octopus. Up yours to the antis!!’, she wrote on Facebook. 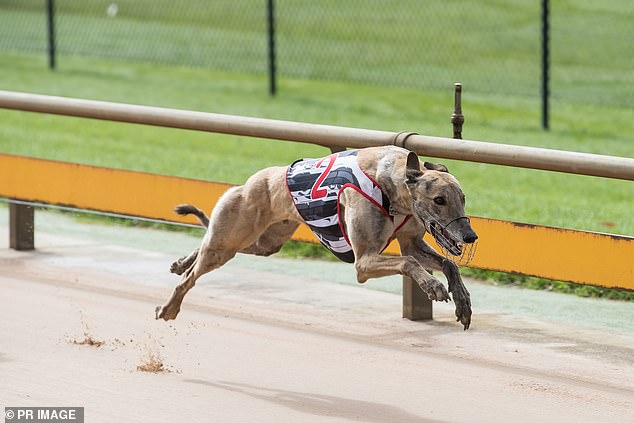 It was a view backed up by many in the racing community.

‘#3 (Man of Power) was the only one to react, must know a thing or two about the real thing,’ one commented, while another wrote: ‘Focused on (the) racing (which) they love. Brilliant to give them their opportunities’, on Facebook.

Many were also in hysterics at how lucky the bunny was to escape having being confronted head-on by seven excited greyhounds.