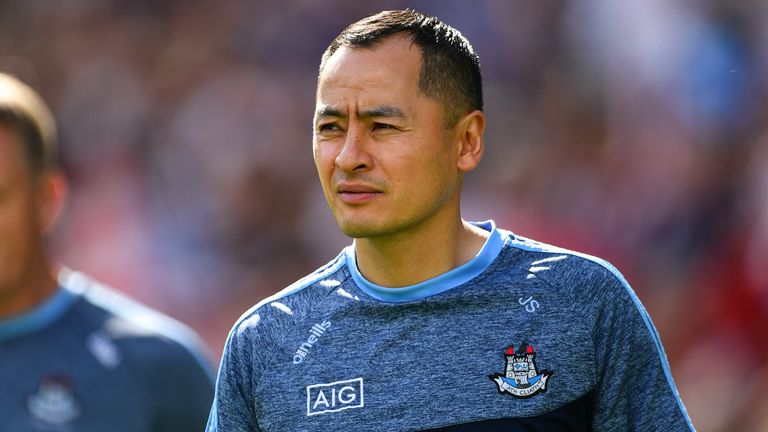 The 25th anniversary of an All-Ireland triumph usually entails the winning team of that year getting brought out onto the field at Croke Park before the All-Ireland final.

But coronavirus restrictions meant no such celebrations took place a quarter of a century on from Dublin’s 1995 win.

Nonetheless, the occasion was marked in a special way for Jason Sherlock, who helped the Sky Blues to the Sam Maguire Cup that year when he was just 19.

“I’d been asked to do something for charity from Justin McNulty, it was about wearing other jerseys. And I wore Chris Lawn’s jersey who was Tyrone full-back in 1995 and I challenged him to wear mine if he had it. He did do the challenge, he had the jersey. It was great to see he still had it and it still fitted him.

“On the week we should have been in Croke Park for the final, I got something in the post and it was the jersey.”

On our 25th Anniversary,it was quite the surprise to receive this in the post from @chriko21 A really classy gesture from a classy Gael 💙❤️ pic.twitter.com/vmvnbDi9TT

“Well Jayo, hope all is well. I know the 25th celebrations have been shelved so far, but hope you all get your deserved day in the sun,” read Lawn’s accompanying note.

“I figured this shirt would look better on your wall than my wardrobe.

“I hope some day we can get a beer when all is back to normal.” Sherlock was blown away by the gesture, saying: “It kind of struck me in a couple of ways. One as an individual, for Chris to be as generous as that and to send it down, it just epitomised him.

“As much as we spent 70 minutes trying to beat the lard out of each other, there was definitely a bond after that game and that’s why we swapped jerseys. As soon as the game was over, we embraced and we hugged. So that bond was there. “I think what was interesting was how it captured the imagination of the GAA community. When I did put it up on Twitter, it was amazing the response that it had,

“The GAA is a special, unique thing that we have in this country, and we’ve seen great examples during Covid of how bonded and connected it makes us.

“I was just delighted to highlight just how a guy that I hadn’t seen in so long had done this for me. I think that’s the beauty of the GAA and I think that’s why we would all love to have a GAA championship to talk about and focus on over the winter months.”

Watch Inside The Game every Wednesday evening on Sky Sports Mix. You can catch up on this week’s episode on the Sky Sports YouTube channel.