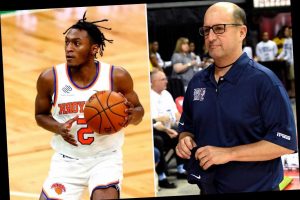 Young Knick is blossoming before our eyes in promising sign

Defense carries Knicks again as they complete a rare feat

Knicks’ top rookie showcases glimpse of what he might become

Jeff Van Gundy loves everything his protege Tom Thibodeau has done for the Knicks at the 15-game mark.

But the former Knicks head coach saved his strongest praise for the mastermind that drafted Immanuel Quickley, the rookie point guard out of Kentucky, selected 25th.

In an interview with The Post about the 7-8 Knicks, Van Gundy, unsolicited, raved about Quickley’s rise, comparing him to the Knicks drafting Charlie Ward at No. 26 in 1994.

“Whoever was in charge of drafting Quickley needs to have an article dedicated to him,’’ Van Gundy riffed with the Knicks sitting in sixth place in the Eastern Conference. “This was a guy looked at as a second-round pick. Someone went to bat for this guy and wanted this guy. He gives them real hope from an offensive standpoint.

“He knows how to draw fouls. He can shoot. He plays with great enthusiasm and energy. That’s a Charlie Ward type pick to me. A guy who was drafted low, but can be a good player over a long period – most likely a starter at some part of his career. It’s a great draft pick.”

Quickley, 21, has electrified the offense off the bench — most notably with a deadly floater and 3-point marksmanship. After a brief slump, Quickley has soared the past four games, averaging 17.5 points, 4.3 assists, 1.0 turnovers and shooting 45-percent from 3. For the season, he’s 95.8 percent from the free-throw line.

Van Gundy is swept away. The Post reported Kenny Payne, the Knicks new assistant coach who guided him at Kentucky, lobbied for Quickley. But senior VP William Wesley is close to Kentucky coach John Calipari. And assistant GM Walt Perrin was a Quickley fan despite him being ranked 50th in some mock drafts.

“That’s why you don’t pay attention to those,’’ Van Gundy, ESPN/ABC’s top NBA analyst, said of mock drafts. “It’s hard to know who a guy is – his intangibles. He was thought of as an undersized 2. You have to give (president) Leon Rose credit. Ultimately he listened to whoever was pushing him. I can’t be more effusive about Quickley.

“If you have a guy who makes the rotation at that position in the draft, it’s an incredible success. That’s why I look at Charlie, getting a guy who can ultimately start. He’s not the same type of player. Quickley is more offensive-minded and Charlie was a much-better defender. But if you get a guy who’s in the rotation late in the draft, it’s an incredible accomplishment for your organization.

“You say mock draft, they were also “mocked” for taking him that early. It’s a good lesson (to the media). You wait till they play.”

The Knicks followed a five-game losing streak to capture their last two in the same style of Van Gundy’s Knicks of the late 1990’s when Thibodeau was an assistant: defense. They allowed 75 points to Boston and 84 to Orlando. The Knicks are ranked No. 1 in opponents scoring average (102.7) and FG percentage (43.3).

“One thing you don’t do is you don’t take small sample sizes and try to extrapolate big theories,’’ Van Gundy said. “When they were 5-3, you don’t overreact. And when you lose the next five, you don’t overreact. And the last two wins were really impressive. But I think what separates players – besides skill – is the ability to be consistent in production and effort. They’ve been very consistent in giving good defensive effort and passing the ball. They can’t shoot at all. They’re the 1990’s-like from a shooting standpoint.”

The Knicks are on pace for a 34-38 record after Las Vegas pegged their over-under for wins at 22.

“They have a lot of work to do and they’ll have some bad stretches because their offense,’’ Van Gundy said. “They don’t have enough offensive talent. Their effort and unselfishness is there nightly. And that is the cornerstone of a team that has a chance to turn it around and also stand for something from a foundational standpoint. You can be 7-8 and have made no progress. You can have walked your way into wins against teams injured or because of COVID. But there’s a fiber to them in how hard they are playing, how unselfish they are.”

“The thing that concerned me when it came to Las Vegas – he never really participated – but the concern is missing flights,’’ Van Gundy said. “(It’s) professionalism. Will he get in his own way or strive to do everything right and allow his talent to come out? I don’t know but he’s playing really well, really hard and defensively he’s had an impact.