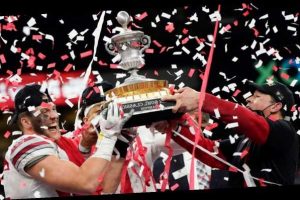 The Ohio State Buckeyes romped in the Sugar Bowl, scoring seven touchdowns on the way to a 49-28 win over the Clemson Tigers that earned the Buckeyes a spot in the College Football Playoff National Championship against Alabama.

Six of Ohio State’s scores came via quarterback Justin Fields’ passing in a performance that turned heads and had one of the Buckeyes’ most visible and vocal fans — LeBron James — crowing on Twitter in a flurry of tweets after Ohio State’s win and shortly after James’ Lakers beat the San Antonio Spurs.

James threw some shade at Clemson coach Dabo Swinney, who took issue with Ohio State’s limited six-game schedule and had the Buckeyes ranked No. 11 in the USA Today Coaches Poll.

LeBron didn’t stop there in needling Swinney, making reference to a memorable scene from “The Last Dance.”

James also gave a shoutout to Fields and noted the Buckeyes still have work to do.

The Buckeyes’ Twitter feed razzed Swinney as well, playing off Clemson’s nickname and Swinney’s optimistic outlook about the coronavirus.