Home » Sport » Magpie midcourter steps up after stepping away

Magpie midcourter steps up after stepping away

As risky as it may have appeared heading into a World Cup year, continuing on as she had been was not an option for Kim Ravaillion. Had the young veteran of 60 Tests not stepped away from the Diamonds, temporarily, she may have been lost to the game forever.

“The thought was going through my mind, and that was the hardest thing – it was reality,’’ the Magpies midcourter told The Age. “It was like, ‘I’m not happy, I could walk away from this'. Or could  just take a break and see if I missed it. And I did.’’

It had been, for so long, a relatively charmed run. Becoming the first player to debut for Australia before having played a national league game, Ravaillion was part of two Queensland Firebirds championships and won Commonwealth Games and World Cup gold.

She then became a marquee Magpies’ signing – yes, one of many – in the inaugural Super Netball season. An OK first year for player and team tailed off badly in 2018, and, not long after an underwhelming southern Quad Series, Ravaillion made herself unavailable for national selection.

While potentially opening the door for the likes of Vixens’ captain Kate Moloney into the highly competitive midcourt of a Diamonds World Cup squad due to be announced this week, Ravaillion’s decision was not so much a gamble as a necessity. 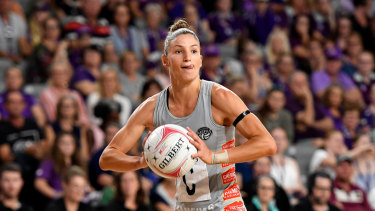 Kim Ravaillion of the Magpies.Credit:AAP

“Oh yeah. Burnout. Felt like I was drowning,’’ the 25-year-old says of her period of physical and mental exhaustion.

“So I wasn’t going to give much to the team if I was like that. But I was more worried about me as a person, and I wasn’t going to be a good person if I was in the state that I was then (compared) to what I am now. I think the break’s been amazing. I’m refreshed, and, yeah, it’s the best thing that I could have done.’’

Rejuvenation was helped by a US holiday with partner Adam Treloar, the Collingwood midfielder with whom she shares a home, occasionally a Collingwood jumper when she’s supporting from afar, and a degree of fitness fanaticism that means Ravaillion sometimes has to remind herself that the best program to follow is the one she can watch in potato mode from the couch.

“It is really hard to stop, sometimes, but having Adam, we’re very similar,'' she says. "So we’ve got to go, ‘Look, no, we need a day off to just relax and whatever’, but we always like to keep fit and healthy, anyway, because we don’t want the pre-season to be hard!’’

The last was much easier than the one before, though, which Ravaillion admits she was battling just to get through. But 2019, under new coach Rob Wright, was different. “I was hitting the mark I’m happy with, not struggling to get there. So I was more excited to train, and I love training. I could push myself, whereas before it was just hard.’’

Yet when she thought about what life after netball might look like, considered a few tertiary courses, and tried a bit of teaching, Ravaillion realised she would stick to her strengths. The former personal trainer intends to follow the fitness-health science path and plans to start a business with Treloar, eventually.

“Oh, geez, you’re asking me that? We’re both very competitive and we’re both very fit in our own kind of way. He’s very powerful and I’d say I’m a bit more endurance!’’

A better comparison, perhaps, is with teammate Ash Brazill, Ravaillion’s new partner in the Magpies’ gym, and whose vertical leap and pure athleticism has helped her to dominate the Pies’ honour board as reigning best and fairest in both Super Netball and AFLW.

“That girl’s got quads that have postcards, apparently, so for me it’s just trying to keep up with ‘Braz’,’’ says Ravaillion. “She’s such a strong athlete and I want to be a bit stronger, so partnering up with her is very competitive and it’s good. We push each other and we just have so much fun doing it.’’

And Brazill’s take: “It’s probably dangerous because we’re so competitive with each other, it’s almost like, ‘All right, if you can do this, then I’ll do this’.’’

The result is that personal bests are being shared.

"Which is funny because we’re the two smallest in the team,'' jokes Brazill. "So we’re like, ‘Come on girls!’ ’’

Bendigo will host the Magpies – fourth with two wins, a draw and a loss – on Saturday against the unexpectedly bottom-placed West Coast Fever.

While Ravaillion’s own form has had some dips, such as against the Giants two weeks ago, her mojo is returning as the national selectors prepare to announce the 12 for Liverpool in July.

“I feel like it’s getting there,’’ says Ravaillion of her recent level. “I don’t feel like I’m back back, but I reckon each game that I play I’m just going to try and step it up a notch and really let loose and just play the way I can.’’

As for her prospects of a Diamonds return: “It’s always in the back of your mind; I mean, everyone’s talking about it, so how can you not?

“I feel like it is a bit intense out there at the moment. I kinda just want the team to be selected so that I can stop worrying about the whole thing. But it is there, and fingers crossed that I get picked but, if not, I’m pretty happy with where I’m at.’’