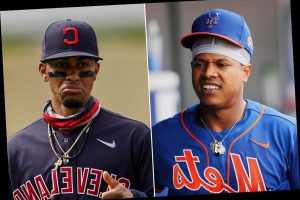 Francisco Lindor’s new teammates are excited about the trade that sent the star shortstop to Queens.

Mets pitcher Marcus Stroman made it known how he felt about the blockbuster, tweeting at new owner Steve Cohen not long after the trade was announced.

While catcher James McCann, who the Mets signed to a four-year, $40 million deal this offseason, tweeted: “That’s big time” with two fire emojis.

Stroman has spent time this offseason trying to recruit Lindor. In November, he quote-tweeted someone mentioning they could be future teammates, saying, “I’m praying on this.”

The Mets also got pitcher Carlos Carrasco in the deal, and will be sending back shortstops Andres Gimenez and Amed Rosario, pitcher Josh Wolf and outfielder Isaiah Greene.